Michigan Pipeline Leak Could Be Worst Ever in the Midwest

The blown-out BP plc (NYSE:BP) well in the Gulf of Mexico was such a horrific and dramatic disaster that it nearly totally obscured a ruptured pipeline near Marshall, Michigan, that dumped more than 800,000 gallons of heavy crude oil into the Kalamazoo River system. The pipeline was part of the liquids pipeline system of Enbridge Energy Partners, L.P. (NYSE:EEP) that comprises about 8,200 miles of liquids pipelines capable of carrying more than 2 million barrels per day. Enbridge Energy Partners, in turn, is owned by another subsidiary of Enbridge, Inc. (NYSE:ENB).

The ruptured pipeline, part of Enbridge’s Lakehead system, consists of about 293 miles of 30-inch steel pipeline that was first put into service in 1969. The line transports crude oil from northwest Indiana to Sarnia, Ontario, just across the US-Canada border at the southern tip of Lake Huron.

The pipeline had been checked for corrosion in June 2009, using a device called a ‘smart pig’, which is inserted into the line and creeps along using ultrasonic and other technology to check for weaknesses in the pipe. Enbridge notified the US Pipeline and Hazardous Materials Safety Administration (PHMSA) on July 15th that the company planned to remediate anomalies in the line by replacing rather than repairing the pipe, but that the effort would require more time than Enbridge had been given. The pipeline ruptured on July 26th. 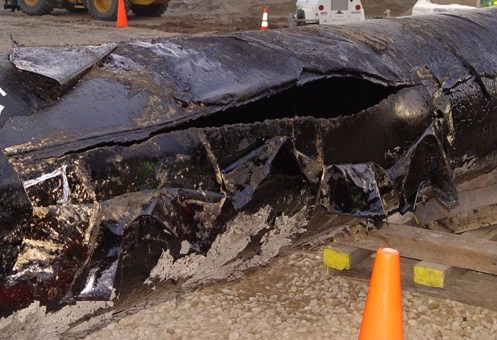 The damage appears to be along a seam that runs the length of each 50-foot section of pipe. The hole itself is called a “fish mouth” rupture for obvious reasons. The position of the rupture in the photo is oriented approximately as it was when it was underground, with the rupture at about the 3 o’clock position.

A common cause of ruptured oil and gas pipelines is stress corrosion cracking, where water in the pipeline gathers at the bottom of the pipe and slowly corrodes and weakens the pipe from the inside out. Damage to the coating could also occur when the pipe is transported from the factory to the pipeline site or any of a variety of knocks and dings occurs during construction or service.

Under the pipeline pressure needed to move the oil, stress is added to the corrosive effect, particularly near pump stations like the one at Marshall, Michigan. Pressure in the pipeline at the time of the rupture was estimated to be 425 psig, safely below the rated maximum of 624 psig.

It is highly unlikely that the rupture in the Enbridge pipeline was caused by stress corrosion cracking because that anomaly nearly always occurs at the bottom of a pipe (the 6 o’clock position). In a similar pipeline rupture in Minnesota in 2002 the cause was determined to be a stress fracture that started when the pipeline was loaded onto a truck in 1967 for transport.

The service life of a pipeline is typically judged to be about 30-40 years. In general, periodic inspection of the pipelines leads to sections being replaced piecemeal rather than replacing the pipeline at one time. New pipeline construction costs could total as much as $2 million/mile.

From 1990 through 2009, the US has averaged more than one serious incident on an oil or gas pipeline every week. That totals nearly 1,100 in twenty years. For ‘significant’ incidents on all oil pipelines, the 20-year total is 5,626, or more than five incidents per week. A ‘significant’ incident releases 50 or more barrels of liquid into the environment or costs more than $50,000 in 1984 dollars; a ‘serious’ incident is one in which someone is killed or a hospital stay is required.

As will be the case with offshore drilling, onshore, and offshore, pipelines are sure to come under greater scrutiny after the Gulf of Mexico and Michigan spills. More frequent inspections and a quicker response from the industry to repair deficiencies are the two likeliest outcomes.