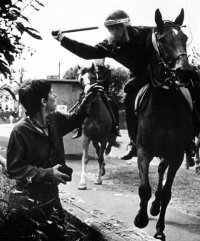 The labor stoppage, commonly known as the strike, is a natural result of tension between labor and management. Management has always wanted work for as little compensation as possible. Labor has always wanted compensation for what it considers a fair day’s work. The gulf between the two has often caused violence and even assassination. Labor strife has led to some of the most sensational trials in America history, perhaps the best known is the trial of three Western Federation of Miners leaders who were accused of killing the former governor of Idaho in 1905.

Labor strife has always been greatest at the point when industries have reached their peaks, enjoying great financial strength and employing large numbers of workers.

The earliest large strikes were against textiles companies which handled the finishing of cotton and other raw goods from the South. Most of these firms were based in the labor-heavy Northeast and Midwest. The textile companies knew that their profits would be challenged by higher wages.

From there, the labor movement migrated to the mining of metal and companies that finished mined ore into steel. Until Andrew Carnegie, steel had not been a huge industry. The product was not needed in bulk until it was well-enough made to be used in the expanding shipping industry, and for cars and other manufactured goods that were used by consumers and industry.

The rise of the car, in some part because of the availability of steel, caused the next great rise of labor as workers fought for better working conditions in the huge factories of the Midwest. As transportation moved from ground to air, among the largest employers in the country became airlines whose major costs were people, planes, and fuel–with people being the most variable cost among them.

The history of the American strike was one that helped eventually create the nation’s great middle class, spreading wages from the country’s most successful corporations among millions of people.

These are the greatest strikes that changed the face of business and helped create the American middle class.