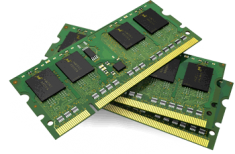 Intel Corporation (NASDAQ: INTC) did not exactly get a resounding endorsement today in an afternoon research call.  S&P Equity Research decided it was removing its Buy rating that had been in place since March of 2009.

The firm downgraded Intel’s rating down to “Hold” from “Buy.”  The move is on the heels of the recent forecase reduction in PC sales in 2011 and out to 2012.  The growth ahead is just being referred to as lower growth that is healthy but uninspiring for chip investors.

S&P further noted a more exciting lineup of opportunities from chip companies that are already winning from the tablet and smartphone growth.  While acquisitions will improve the story for these faster growth markets, those same acquisitions are likely to pressure Intel’s margins until the merger benefits can be realized.  While we did not see any other rating changes from S&P yet, the winners so far in the tablet and smartphones are QUALCOMM Incorporated (NASDAQ: QCOM) and ARM Holdings plc (NASDAQ: ARMH).

Elsewhere in chip research calls today, Barclays maintained its ‘Overweight’ rating on Micron Technology Inc. (NASDAQ: MU) based upon a positive tone at the Analyst Day last week.  It also raised the target to $13.00.  Lazard also raised its rating to “Buy.”  Maxim Integrated Products Inc. (NASDAQ: MXIM) was also raised to “Buy” at Nomura earlier today.  Intel shares are down 0.6% at $21.63 while the Semiconductor HOLDRs (NYSE: SMH) are higher by 0.55% at $36.20 as investors are looking elsewhere in chip-land.