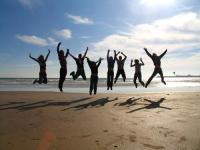 Two different reports painted an upbeat picture of the U.S. economy as Obama administration and Republicans in Congress remain at odds over how to tackle the federal government’s debt problem.

A biannual survey released today by Grant Thornton LLP of  318 CFOs and other senior financial executives finds increased optimism about the U.S. economy, though there are worries about global issues such as rising commodities prices and inflation.   The survey found that 48% expect the U.S. economy to improve in the next six months, up from 30% six months earlier.  Their optimism did not stop there.  Some 39% plan increase head count, up from 28% six months earlier, and 54% are optimistic about their own company over the next six months, up from 46%.

Investors, for now, are betting that the economy will rebound as well.   The S&P 500 Index has gained more than 10% over the past year.   One of the many issues holding the market back is political risk, particularly the political fights over the debt ceiling.  S&P threw cold water on the rally yesterday when it said there was a onr-in-three chance that it would chop the U.S.’s treasured AAA debt rating.

As the researchers found, there are many other issues affecting the economy that could derail the recovery.  Grant Thornton found that 50% of respondents were worried about inflation versus 31% six months earlier and 24% one year ago.  Most  also thought, not surprisingly, that it will take Japan at the most 3 to 5 years from its recent natural disaster.

A report issued by IHS Global Insight came to a similar conclusion though it pointed out that growth is hardly robust.  Moreover, there are plenty of caveats with these projections including the impact of high gasoline prices and increased costs for food.

“Real GDP growth in the first quarter is likely to have been less than 2%—and second-quarter growth will probably be only a little stronger,” IHS says.  “In contrast, manufacturing output is roaring along and recent business surveys are consistent with a 4% growth rate of the economy. This suggests that, after a short pause, real GDP growth will reaccelerate, reaching 3.5–4.0% in the second half of this year. “

Even so, US real GDP growth rate will continue to lag the rest of the world through at least 2015, according to IHS.  Most experts also expect it to take years for the jobs market to recover to its pre-Recession levels.  About the only solace that IHS can offer is that the rest of the world is also suffering from an economic slowdown.  Worldwide real GDP growth is expected at 3.5% this year before hitting above 4% for the next few years.

China, for example, is expected to see GDP growth of about 9.3% this year versus 10.3% last year as inflation continues to take a bite of corporate profits.   IHS expects Chinese economy to cool down to 8.6% through 2012 and remain at about that level through 2015.   Emerging market countries should see growth slow to 6.4% from 7.1% last year.

The Eurozone is in the worst shape of any region except for Japan because of the sovereign debt crisis affecting Greece, Portugal and Ireland among others. IHS forecasts GDP growth of 1.7% in 2011,  rising to 2% in 2015.  Japan’s economy is not expected to grow this year for obvious reasons.  Growth should hit 3.6% in 2012 because of the rebuilding  needed to recover from the natural disaster before settling down to 1.5% in 2015.