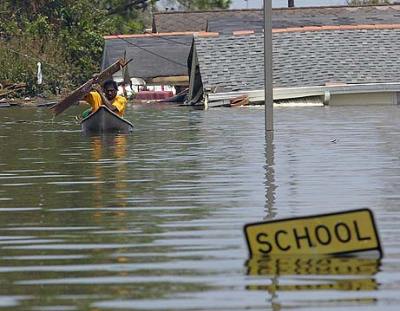 The United States Army Corps of Engineers flooded valuable farmland west of Vicksburg, Miss. to save New Orleans. The waters crested May 19 in the old southern city at 57.1 feet, surpassing a record set 84 years ago. The awful choice the Army Corps was forced to make – having to flood one area to save another – says a great deal about some of the problems of the current flood control infrastructure.  These measures are now considered advanced compared to those of just a few decades ago.

The Mississippi flood, the second most destructive in the history of the U.S., has finally begun to subside, but others are anticipated to spring up around the country later this year. The New York Times reports that snow packs in mountains in the US west are high enough that, “Fear of a sudden thaw, releasing millions of gallons of water through river channels and narrow canyons, has disaster experts on edge.” Experts can anticipate the damage, but are nearly helpless to prevent it.

The floods sweeping through the Mississippi River Basin and other parts of the region have become an increasing concern not just to the people living there, but to anyone concerned with the health of the U.S. economy. The costs of aid, of reconstruction, of destroyed crops and of lost business are estimated by some to be as much as $9 billion, and that forecast may prove to be conservative. This disaster also taxes national resources. CNN reports the National Flood Insurance Program could buckle under the weight of its obligations. “The massive Mississippi River flooding is expected to leave behind a giant bill for the government program, which offers affordable insurance to people who live in risky areas and then backstops their claims,” the news network says.

As residents throughout the lower Midwest and mid-south are currently experiencing firsthand, floods can be among the most destructive forces unleashed by Mother Nature. Unusually large amounts of rainfall and snow melt, sudden shifts in temperature can all unleash flood waters that can wreak havoc on everything in their paths.  Entire towns can be flooded and millions of acres of crops destroyed at a frighteningly fast rate.  Oftentimes, the people who flee their homes for higher ground will never return.

Since the U.S. Geological Survey began collecting flood data at the beginning of the 20th century, some 32 major floods have been reported. They have occurred all over the country,  though many have been in the Mississippi River Basin, the site of the current disaster. Based on an analysis of the USGS database, and adjustments for current dollar values, 24/7 Wall St picked the ten most destructive floods in American history. We excluded those floods which were caused by hurricanes because their damage can be as much from wind as from water.

The 24/7 Wall St. Ten Most Destructive Floods In American History