Sycamore Partners disclosed a 9.9% ownership stake in Talbots (NYSE:TLB), and shared its views in an August 1 regulatory filing that the women’s apparel retailer was “undervalued.” The private-equity fund request for a meeting with management to discuss “business, operations, strategy and future plans” is being viewed by Wall Street traders as but the first dance in a fated buyout attempt.

Though the stock trades at 2.8 times tangible book value, a 57.4 discount to its apparel/accessories peer group, according to Thomson Reuters data – and shares are off more than 72 percent in market value during the last year – this does not, in of itself make Talbots a “bargain” buy. To the contrary, most relative valuation metrics and forward earnings estimates suggest the company will remain out of fashion – just like most of its store merchandise these days.

The Hingham-Mass clothing chain, the store affluent, well-educated (middle-aged to senior) women have traditionally trusted for classic attire, like grey herringbone wool slacks and navy-blue blazers, is in the midst of an identity crisis – three years and counting. Looking to ditch its perceived “dowdy” image and broaden its appeal to younger women, the company has repeatedly “reinvigorated” its merchandise lines with expanded palette of colors and form-fitted clothing suggestive of a fresher, sexier appeal – what management has tagged “tradition transformed”. 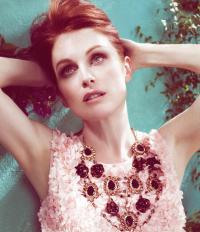 Out with the supermodel, in with the actress

Supermodel Linda Evangelista, 45, hired to show off the revamped and rebranded Talbot’s Fall 2010 collection, has already been shown the door. In yet another reboot, actress Julianne Moore, 51, will be the new face of yet another splashy ad campaign (Fall- 2011 merchandise).

In first-quarter 2011, total net sales fell 6% to $301.3 million. In-store sales year-on-year declined 6.5% to $240.8 million, due primarily to a 6% decrease in customer traffic and an increase in mark-downs, according to chief financial officer Michael Scarpa.

That this constant brand tinkering has blurred the “classic” clothing Talbots is known for, and turned off traditional customers cannot be disputed – just look at trailing 12-month operating metrics (ending January 2011): revenue growth was off 1.8% (compared to average gain of 5.9% in apparel industry); gross margin of 29.2% trailed industry average by 630 basis points; and, net operating margin was an anemic (1.0) percent, compared to apparel industry gain of 3.6 percent, according to Thomson Reuters data.

How much “Bling! Bling!” left on balance sheet?

“We are vigorously working to address all of our challenges, focusing on directing our merchandise strategy to ensure the proper balance of classic to fashion forward styles,” chief executive officer Trudy Sullivan confidently told investors on the last earnings call (same speech, new quarter).

Given Talbots below industry-average operating metrics, declining traffic, weaker pricing power, and confusing brand imaging, one has to question just how resilient the company’s balance sheet can be: Can the company redress fashion-design errors without irreversibly damaging shareholder value?

At April 30, Talbots had $8.6 million in cash, net working capital of $96.9 million, and $200 million in untapped credit lines (secured by customer accounts receivables and merchandise inventories). That’s all the good news.

Whatever value Sycamore might see in Talbots, it ain’t coming from existing operations:

Management has announced plans to close 110 of its 568 stores by 2013, at an estimated cost of only $15 million. Say what? The company closed just 6 Talbot stores last quarter, incurring restructuring costs of about $2.3 million, comprised of lease exits, severance and other related costs, according to CFO Scarpa. The company owns just six stores, and owes rent payments on the rest totaling $334 million through 2013. The company can only avoid paying millions in contractual obligations on stores opened more than five years ago – and that’s not a done deal (should landlords do the nasty and go the litigation route for rent enforcement).

Additionally, buried in its regulatory filings is a little item involving back taxes. To wit:

“We may be required to make significant payments over the next twelve months to a state tax authority regarding certain tax matters which have been subject to appeal, pending final resolution and the outcome of potential negotiations with this authority.”

Talbots could end up incurring income tax, interest, and penalties totaling $70.8 million (related to past acquisitions and share sales), according to the 2010 annual report.

Consensus earnings estimates culled by Thomson Reuters are forecasting Talbots to show a loss of 49 cents a share next year and a one-cent share-net loss in fiscal 2013, mostly tied to continued margin issues (compounded by rising source costing, i.e, raw materials like oil and cotton prices).

Given limited earnings and free cash flow visibility, the company may need to leverage its balance sheet to fund quarterly working capital requirements going forward. Ergo, save for the 44 acres the company owns in prime real estate at its Hingham-based headquarters, the 10Q Detective doesn’t see anything but ghosts of Christmas seasons past in Talbots future too.

Furthermore, Talbots has moved to defend itself against a potential takeover by adopting a “poison pill,” a stockholder rights plan – more like a nuclear detonator – that calls for issuance of 10 new shares for each share to be dispensed to current shareholders, should Sycamore breach the 10% ownership level.

Should Sycamore make a play for Talbots, the venture fund would likely need the backing of other big stakeholders – like Oppenheimer Funds, which hold a 13.3% stake (grandfathered from poison pill), according to recent proxy data.

“As we look at the back half of the year,” said CEO Sullivan on a recent conference call, “we will deliver a stronger balance of classic versus fashion forward styles in our assortments. Our goal is to offer our core customer the updated modern classic merchandise that she has asked us for and which we believe will allow us to expand our customer base as we also seek to attract a new customer. Overall, we believe our fall assortment is a more balanced representation of the “Tradition Transformed” platform.”

Given Sullivan’s dismal fashion sense to date, shareholders can only hope that Ms. Moore will deliver like she did back in 2001, when she replaced actress Jodi Foster in the role of FBI agent Clarice Starling in the “Silence of the Lamb” sequel. That movie, called “Hannibal,” smashed through its predecessor’s box-office receipts of $273 million.