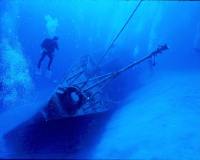 Odyssey Marine Exploration, Inc. (NASDAQ: OMEX) is far from your ordinary company.  This is a public treasure hunting outfit.  Really.  The company is generally not much of an equity trading focus, except for the days where it announces a new treasure find or an update on an existing treasure find.

Today it is in the news after having confirmed the identity and site location of the shipwreck of the SS Gairsoppa, which was a 412-foot steel-hulled British cargo ship that was torpedoed and sunk by a German U-boat in February 1941.  This ship was loaded full of millions of ounces of silver.

It was just at the end of March that Odyssey Marine Exploration was named as one of the 24/7 Wall St. most unusual public companies in America.

Unlike controversial shipwreck ownership, Odyssey was awarded the contract under a competitive tender process back in 2010 for an exclusive salvage pact with the U.K. (for the cargo) of the Gairsoppa.  Odyssey to retain 80% of the net salved value of the silver bullion recovered under the contract.

The release noted that research and official documents indicate that the ship was carrying approximately 7 million total ounces of silver, which included more than 3 million ounces of private silver bullion insured by the UK government which would make it the largest known precious metal cargo ever recovered from the sea.

This will be no easy task and it isn’t exactly like a scuba team can just hoist the silver up.  The wreckage is said to be nearly 4,700 meters below the surface of the North Atlantic.  It is also about 300 miles off the coast of Ireland in international waters.

Remotely Operated Vehicle operations allowed for video and photographs of the shipwreck and now the company is in the planning phase for how to recover the silver.  The current time line given by the company is that it anticipates operations will begin in the spring as soon as the weather window begins to open up in the North Atlantic.

iShares Silver Trust (NYSE: SLV) is how more and more investors track silver these days.  Odyssey is probably not as thrilled that the $40.00 reading on September 13 has fallen to just under $30 in less than two-weeks.  Still, money is money and this could lead to a substantial boost for Odyssey Marine if it can recover the bulk of that bullion.