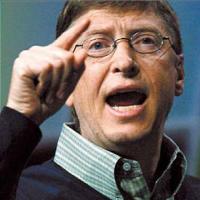 You might have already heard the reports that Apple is sitting on a lot of cash, around the $100 billion mark. You might have even read the scores of recommendations about what it should do with all this cash. But America’s largest company — by market cap — is keeping mum on what it is going to do with it. CEO Tim Cook’s recent comment that the cash “is more than we need to run the company” had investors guessing — hoping — that means dividend. This certainly was the case in 2004, when Microsoft was holding a large sum of cash. It paid out a one-time dividend that returned $32 billion to share-owners and instituted a regular quarterly dividend payment thereafter.

And the cash keeps rolling in for Apple. Driven by iPad and iPhone sales, revenue growth has been huge. Analysts at Canaccord Genuity project revenue of $157 billion in 2012, up from $108 billion in 2011. They also estimate that the release of the iPhone 4S lifted Apple’s share of the smartphone industry’s operating profits to 80% last quarter. Quarterly profits will vary, based on new product releases, but an 80% share of the entire industry shows Apple’s ability to charge carriers large premiums compared to its competitors. iPad sales have surpassed Mac sales and are now Apple’s second highest source of revenue. With Apple’s product innovation history and estimated growth, could a $200 billion cash balance be far off?

24/7 Wall St. wanted to see what other companies have large cash holdings, and what, if anything, are they doing with their cash. We focused on the most liquid holdings of cash, cash equivalents and short-term investments, which mature within one year and are therefore listed as current assets. In Apple’s case, this does not include the $67 billion in long-term marketable securities, those with a maturity date over one year. We excluded banks and companies with large financial service arms that require cash for lending purposes. By this measure, Microsoft is the top holder of cash, with $52 billion.

Short-term cash holdings, by nature, are invested conservatively. Management, overseen by the board of directors, must take “due care” not to put corporate cash at risk. Companies will hold onto cash for a variety of reasons, either for operations, buying assets or as a guard against future downturns. But when holding onto them too long, conservative investments risk losing value to inflation.

24/7 Wall St. gathered information from SEC 10-K and 10-Q filings. All data is for the last reported quarter.

The following lists the 10 top holders of cash. If you want an idea of where to hold your liquid funds, we offer a few highlights of where these companies have parked their money.