A Need for Social Security When There May Be Little

More and more Americans expect to rely on Social Security as they move into retirement. Based on government numbers, the agency will have trouble supporting them. Due to a need for Congress to show that it can reduce deficits and tame the national debt, the amount of benefits could drop soon. That will leave generations with a retirement fund shortfall.

A new poll from Gallup shows:

Thirty-three percent of American nonretirees now anticipate that Social Security will be a major retirement funding source. In 2007, prior to the recession and financial crisis, just 27% did so.

The problem was caused by three trends. The first is that home prices have fallen enough to rob house owners of the equity they would have had for retirement. The second is that investment trends have denied future retirees of funds. Some of these people had investments crushed by the stock market collapse three years ago. Others face low interest rates on fixed income-based investment funds. The last reason is that fewer Americans can rely on one of the mainstays of retirement financial support — pensions.

One of the effects of the problem is already well-known. People who would have retired at 60 or 65 a generation ago, now must delay that time until they are late into their 60s or early 70s. More Americans are healthy late in life, mostly because of medical advances. One domino impact from this trend to work longer is that younger Americans who struggle to find good jobs face harder odds.

While Gallup has captured the trend, it has not the factors that will cause it to worsen in the future. The increase in older workers has substantially altered the dynamics of who can and cannot find work. The government’s eventual need to tame increases in Social Security payments will exacerbate that.

Methodology: Results for this Gallup poll are based on telephone interviews conducted April 9 to 12, 2012, with a random sample of 1,016 adults, aged 18 and older, living in all 50 U.S. states and the District of Columbia. 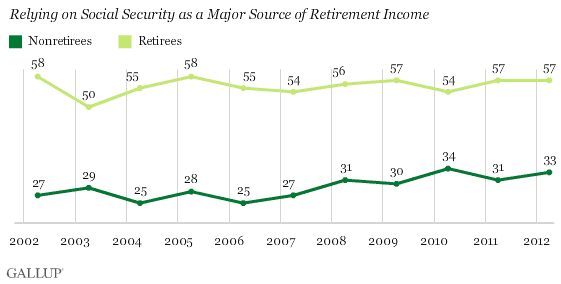