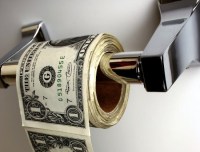 Is the end of the low rates, or no rates, in Treasuries finally coming closer to fruition?  We would advise against betting the ranch that a super-spike is coming in rates at this point because the economic climate just doesn’t support it, even with the risks of the fiscal cliff coming down the pipe.  Still, bond investors are finding out just what a reversal in bond prices and yields and can do to their portfolios.  If we have another couple of weeks as we have had, some of the long-term debt investors may be down closer to 10% of their face value from late in July.

The ProShares UltraShort 20+ Year Treasury (NYSEMKT: TBT) bottomed out at $14.08 on July 25 and that is now above $16.50.  While there is leverage there, this shows just how profitable the bet against Treasury bonds has been.

The FOMC has maintained that exceptionally low interest rates are a thing that should just become expected until at least late in 2014.  Maybe it is not time to worry about the fiscal cliff today, but long-term rates have risen because the economic weakness did not continue getting worse.

If rates rise much more in the very near-term, investors better start to watch out for those dividend bubbles we have been warning of for a few weeks. Maybe this is not an immediate Sell-signal, but what happens if these bond investors are suddenly down 10% of their face value in bonds because they were too scared to go into stocks?