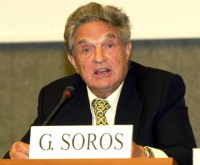 Investor George Soros laid it on the line in a speech today in Berlin:

The policy of fiscal retrenchment in the midst of rising unemployment is pro-cyclical and pushing Europe into a deeper and longer depression. That is no longer a forecast; it is an observation. The German public doesn’t yet feel it and doesn’t quite believe it. But it is all too real in the periphery and it will reach Germany in the next six months or so.

Soros said that Germany needs to give up demanding austerity from other members of the eurozone and support a move for fiscal unification or leave the eurozone altogether. He thinks it would be best if the country stayed in and helped the entire union boost growth. However, harping on austerity is pro-cyclical and won’t get the job done.

The German Constitutional Court is scheduled to rule on Wednesday whether or not German funds can be used to purchase sovereign bonds of other eurozone members.