Did the U.S. Subsidize Its Car Industry as Much as China? 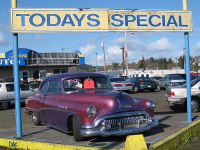 Three pieces of news came out of the auto industry recently. The first involves the decision of the Canadian Auto Workers union to target Ford Motor Co. (NYSE: F) in its negotiations over jobs and benefits. Another set of reports said that General Motors Co. (NYSE: GM) wants to buy back the shares the U.S. Treasury got as part of the bailout of the company in 2008. The Treasury will not go along with the program. At GM’s current share price, taxpayers would suffer a huge loss on the aid package. The third bit of news is that the Obama administration will file a complaint against China with the World Trade Organization that charges the People’s Republic with subsidizing its car and car part companies. Those subsidies, if they exist, are not a bailout, but they do have much in common with one.

According to The New York Times:

The W.T.O. case accuses China of providing at least $1 billion worth of subsidies from 2009 to 2011 for exports of autos and auto parts. While China exports virtually no fully assembled cars to the United States, it has rapidly expanded exports to developing countries, and those exports compete to some extent with cars exported or designed in the United States.

The Treasury’s aid to GM and Chrysler totaled as much as $80 billion as the two manufacturers went through prepackaged Chapter 11. GM and Chrysler almost certainly would not be exporting any cars or car parts anywhere if the Treasury had not stepped in. One or both firms would have been liquidated or taken over by foreign interests, as Chrysler has been. And GM wants to completely end the government’s takeover through the sale of the Treasury’s remaining stake.

The White House probably wants to look good to voters in the Midwest as Obama fights for reelection. First, it bailed out the auto industry and saved jobs. Today it has shown it will protect the industry from the ongoing and evil trade practice of China that has cost so many manufacturing jobs in the United States and could cost more of them.

China cannot defend its actions by pointing to the U.S. car bailout because it is not related to the government aid by the People’s Republic, which has allegedly helped its auto manufacturers overseas. But, just for the stake of perspective, it may want to mention the issue in its filings with the WTO.