BofA Outlines 2013: The Great Rotation from Bonds to Stocks

Bank of America Merrill Lynch has its key RIC Report out this week effectively telegraphing what would be The Great Rotation away from bonds. The report is titled “The Bond Era Ends” and it outlines how 2013 could end up being the year of the great rotation from bonds to stocks.

BofA’s Michael Hartnett said, “The era of bond outperformance has ended. Equities have staged a remarkable stealth rally, with US stocks not only outperforming Treasuries over the past one and three years, but also the past 10 years.” He maintains that the consensus asset allocation remains one where investors own bonds and are negative on stocks.

The key hinges on whether or not the U.S. successfully navigates the fiscal cliff. It also stipulates two difficult issues to fathom: 1) Europe continues to stabilize, and 2) Chinese growth reaccelerates. There is one issue to address here: the BofA Merrill Lynch macro base case remains high liquidity, low growth.

The anticipation by the firm is that a Spring 2013 great rotation from bonds to stocks continues to grow and hints that a stealth rotation has begun in the U.S. financial markets.   On the bright side: U.S. housing indicators are very encouraging from homebuilder and bank stocks.  Hartnett noted, “Both signal markets are quietly beginning to discount the revival in 2013 of the two missing ingredients of a strong US recovery: credit and jobs. If bond yields begin to rise alongside homebuilder and bank stocks, a major asset allocation shift would be warranted, in our view.”

Another boost is that BofA sees adding to great rotation themes and that investors should be at least neutral in their equity allocations and recommends adding to stocks and bonds of the U.S. banks as well as European bank bonds.

One warning for emerging market (or BRIC) investors was clear: It is too early to play China themes, but the report showed that emerging market debt and consumer-led emerging markets will do better until acceleration in Chinese growth and earnings incites a recovery in China themes via BRIC equities and also seen in the global resource sectors.

It is a bit amazing, but Hartnett almost does not care about the election. He said, “We do not expect the US election outcome to impact equities or asset allocation meaningfully, but a very close election and an impasse on the fiscal cliff, or even greater partisan fighting in DC after the election, would likely have significant downside implications even for our economists’ cautious growth forecasts.” The bank does not expect a recession as domestic companies after the recession were slow on hiring, and that they were slow on investment and M&A. The long and short is that corporations have less fat to trim this time around.

Here is a snapshot of BofA’s Core Portfolio, although we would note that this is not a new portfolio and many picks have not been updated recently. 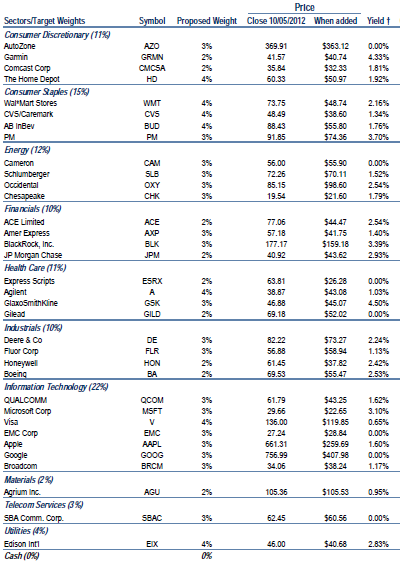