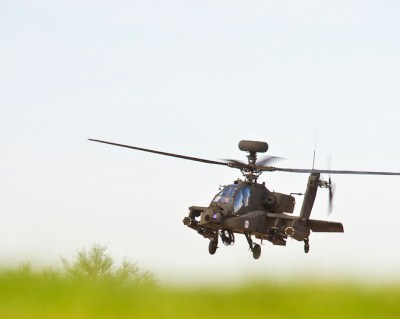 Source: courtesy Boeing Co.
It feels almost like the news flow from 11 years ago is repeating itself, as terrorism is back in the headlines and in the breaking news in America. First it was the dual explosions at the Boston Marathon. Now we have news that a letter sent to Senator Wicker in Washington D.C. has tested positive for ricin poison, bringing back the memories of the multiple anthrax letters of the past. News reports are even starting to talk about “suspicious packages at airports” because the news agencies are reporting these again.

We have expanded our list of American companies that provide counterterrorism and of public companies selling to law enforcement and to the Department of Homeland Security.

Some things are going to be obvious. Airport security and security at public events will be now be on higher alert. If the trends of terrorism and sabotage keep escalating, Americans almost certainly will have to deal with more audio and video surveillance, hazardous materials suits being shown in the news, and increased monitoring of all sorts. These trends are likely to bring increased orders for companies that serve the intelligence and law enforcement communities.

The companies we have identified manufacture and sell products or offer services that fall under law enforcement and under Homeland Security. Some of these are spread into other areas, and we did not include the big corporate giants that have 2% or so tied to these markets. Note that some of these companies are very small, and some have declining revenue due to lower security expenses in recent years.

Alliant Techsystems Inc. (NYSE: ATK) may be thought of for rocket boosters and propulsion for air and space technologies, but the company also happens to be the largest bullet manufacturer in America for the military, law enforcement and Joe Public. The company supplies bullets and ammunition to the Department of Justice, FBI, Department of Homeland Security, Armed Forces and others. ATK operates the Lake City Army Ammunition Plant and recently announced the delivery of 2 billion 7.62 mm rounds to the U.S. Army. ATK’s value is almost $2.4 billion, and it is expected to generate about $4.3 billion in sales in 2013.

American Science & Engineering Inc. (NASDAQ: ASEI) scans for bombs and weapons in transportation systems. It is also involved in mail room screening as well, and any more ricin poison being sent in the mail should increase its public exposure. That being said, revenue has been in decline. This company has a market value of about $492 million, and 2012 annual sales were $203.5 million and expected to drop ahead.

Command Security Corp. (NYSEMKT: MOC) is tiny, as its market value is only about $16 million, but sales in fiscal 2012 were $141 million. The company claims to have 6,000 highly trained personnel for airport security, banks, government offices, health care facilities and other corporate and enterprise security.

FLIR Systems Inc. (NASDAQ: FLIR) handles various degrees of imaging via night-time vision, thermal imaging, chemical and biological detection, explosives detection and more. With a market value of about $3.5 billion, it has expected sales for 2013 projected to be more than $1.5 billion.

Kratos Defense & Security Solutions Inc. (NASDAQ: KTOS) is considered to be a national security technology player selling products, services and solutions for security in the United States. While diversified, Kratos recently announced contracts to deploy specialized security systems for mass transportation, rail and critical infrastructure awards. The company has a market value of about $285 million, and it is expected to have sales of close to $975 million in 2013.

L-3 Communications Holdings Inc. (NYSE: LLL) is an amalgamation of command, control, communications, intelligence, surveillance and reconnaissance products and services. The company has made many acquisitions over the past decade, and it is involved in many other defense applications. L-3 has a market value of about $7.3 billion, and it is expected to generate $12.6 billion in sales in 2013.

Lakeland Industries Inc. (NASDAQ: LAKE) is very small, but it makes chemical protective clothing, disposable protective clothing, safety gloves, turnout gear, high visibility clothing, flame and heat-resistant clothing and other items. Its value is a mere $19 million, and this one is often skipped or overlooked because of its size and liquidity. Sales are running at just under $100 million per year.

NICE Systems Ltd. (NASDAQ: NICE) is a software company that captures and analyzes interactions and transactions in order to realize intent and to extract and leverage insights real-time. Technically this is not an American company, as it is based in Israel, but the company claims that about 25,000 organizations in 150 countries are direct or indirect clients. Its market value is $2.1 billion, and 2012 sales were almost $880 million, but note that the company is diversified in many segments.

OSI Systems Inc. (NASDAQ: OSIS) is a real player involved in homeland security, health care, defense and aerospace industries. In this aspect, it is known well for its Rapiscan Systems for security screening in airports, ports and buildings. OSI has a market value of about $1.1 billion and is expected to have 2013 sales of more than $830 million.

Raytheon Co. (NYSE: RTN) may still best be known for its Patriot Missiles and their more modern replacements, but it is also involved in integrated communications and intelligence. This ranges from seeing through walls and to communications monitoring via its Applied Signal Technology acquisition in recent years for its advanced intelligence, surveillance and reconnaissance systems and services. Raytheon is worth about $18.7 billion, and sales are expected to be about $23.8 billion in 2013.

Smith & Wesson Holding Corp. (NASDAQ: SWHC) and Sturm, Ruger & Co. Inc. (NYSE: RGR) are the two public company gun leaders in America. It sure seems that recent events may drive yet another round of strong gun demand. Gun control legislation also remains up in the air after 14 people were stabbed at a college in Houston and with two bombs going off in Boston. It is possible that the argument against gun ownership may have lost some of its bite. Smith & Wesson is worth about $560 million, and the expected 2013 sales are about $580 million. Sturm Ruger has a market value of about $934 million and is expected to have sales of about $514 million in 2013.

TASER International Inc. (NASDAQ: TASR) makes the tasers, or stun guns, for law enforcement. It is hard to know if terror scares will lift its unit orders, and this company’s glory days were in 2003 to 2005, when the stock went from less than $5 to $30 briefly. Its shares have traded sideways since for the most part, and it is very thinly covered by Wall St. TASER’s market value is still more than $410 million, and sales were almost $115 million in 2012.

Many of these companies have been beneficiaries in the past due to Homeland Security orders, counterterrorism and increased sales to law enforcement and enterprises. We are not trying to pick winners here, nor are we signaling that these are all stocks to buy. We strongly suggest that any investors looking to capitalize on this trend do some serious, deep-dive research of their own on these and other companies before taking any action.