The emerging markets were taking it on the chin and being set up for a really bad week ahead, and the currency woes may start biting into key US industrial exports. 24/7 Wall St. covered the four stocks that dominated the DJIA losses on Friday, but these are five key stocks that avoided the market carnage. Again three are DJIA stock and two of which are active S&P 500 names.

Microsoft Corp. (NASDAQ: MSFT) managed to turn in a gain of almost 2.1% to $36.80 on Friday. You can thank its earnings for this, as well as analysts taking their targets higher for the software and technology giant. The criticism remains over the post-Ballmer transition, so imagine how well it might have done (or will do ahead) if the CEO replacement is handled adequately and rapidly.

Procter & Gamble Co. (NYSE: PG) managed to gain 1.2% to $79.18 after beating earnings expectations. This is also one of the top defensive stocks of the Dow, so investors who want stock market exposure without so much risk might be swinging money and parking it in consumer products too. P&G guided for earnings to rise 7% to 9% per share in 2014. Not bad, not bad at all.

Merck & Co. Inc. (NYSE: MRK) was a bit of a mystery rise, particularly when you consider that Pfizer Inc. (NYSE: PFE) fell by almost 3% on Friday. Perhaps it was just a bounce that was needed after several days of serious losses that robbed almost all of the big gain from the prior week. Merck shares closed up $0.38, or 0.74%, at $51.98 on Friday. Maybe being a defensive stock in the drug sector was another driving force, but the relative performance between it and Pfizer is not really a normal trading observation.

There were two other standout winners as well which are large and actively traded stocks day in and day out.

Juniper Networks Inc. (NYSE: JNPR) managed to hit another annual high of $28.75, and closed on Friday up just over 6.5% at $27.72. That 38 million shares stands out heavily as well, considering that the average volume is almost 9 million share per day. Juniper also saw at least three key analyst upgrades as well. Having 59% quarterly profit growth is not the norm in this market, and Jana Capital is actively pressing the company to do better in managing costs and returning capital to holders. Juniper has about $4 billion in cash and liquidity (versus what is now a $14 billion market cap), yet it pays no dividend. Our quick calculation of a 25% payout of adjusted operating earnings ahead would yield a dividend of about 1.4% without Juniper eating into its huge treasure chest already on the books.

Discover Financial Services (NYSE: DFS) rose after beating fourth quarter estimates. The credit card issuer said that its loan balances were up 4%, while its sales volume rose by 3%. Shares were up as much as 5% at one point, but a 2% broad market correction managed to bring down those gains to “only” 2.8% to $53.88. This is still close to its high of $56.20 for the year and the stock’s high on Friday was $55.50. Being a financial stock and closing up on a day like Friday is impressive by almost all counts, even if the closing price was only 13-cents above the daily low. The more than 9 million shares which traded was about 3-times normal trading volume for Discover.

Friday was without a doubt a bad day for the stock market. Many have been calling for a real correction after 26% DJIA gains and 29% S&P 500 gains in 2013. Even in a sell-off, there is that saying “There’s always a bull market somewhere.” This is just proof again that some stocks can rise handily regardless of the market.

Below is a one-year performance chart of each of these five stocks from Yahoo! Finance. The gains may seem huge on Friday, but the gains versus the strong market over the last year may put this in even more perspective. 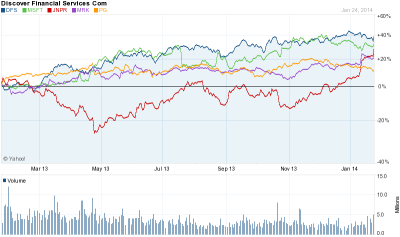