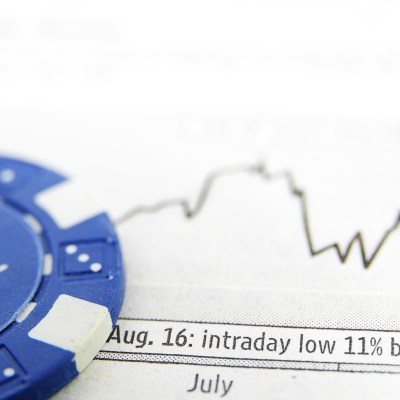 Source: Thinkstock
If there is one thing that is expected to come back into focus in 2016, it may very well be not over-paying for stocks. For years, with interest rates jammed down near zero, investors were willing to pay up. With the possibility of S&P 500 quarterly earnings being down again year-over-year for the third quarter as they were in the second quarter, it will mark the first quarterly back-to-back decline since 2009. That could mean the party is over.

With multiples, safety and dividends in mind, we screened the Merrill Lynch research coverage universe for large cap, dividend-paying blue chip companies trading at less than 15 times forward earnings. The stocks also had to have a rating of Buy. We found five that met the criteria.

This company posted solid second-quarter numbers, and many on Wall Street think third quarter will be good as well. AT&T Inc. (NYSE: T) is clearly one of the most ignored dividend plays on Wall Street. In fact, AT&T continues to be one of the most under-owned securities by active fund managers, according to Wall Street data. Trading at a very cheap 11.95 times estimated 2016 earnings, the company continues to expand its user base, and strong product introductions from smartphone vendors have not only driven traffic, but increased device financing plans, an area that many on Wall Street believe could lead to some earnings weakness.

AT&T investors receive an outstanding 5.66% dividend. The Merrill Lynch price target for the stock is $40, and the Thomson/First Call consensus estimate is $36.93. Shares closed Tuesday at $33.22.

This old-school large cap tech stock is very reasonable valuation-wise, but turned in earnings that missed Wall Street estimates again. Oracle Corp. (NASDAQ: ORCL) trades at 13.2 times estimated 2016 earnings and still provides solid free cash flow yield. Oracle plans to make almost all of its services available via the Internet, as the database-software company changes its business model to fit a new competitive landscape. Around 65% of Oracle’s products are available on the cloud today, and that is expected to climb to 95% by the time the company holds its annual Oracle OpenWorld conference later this month.

The stock is down over 15% so far this year, and many on Wall Street expect version two of the 12c database to drive an Exadata product cycle, and plain and simple don’t believe that has been sufficiently discounted in the stock. Some firms did lower the near-term cash flow because of the cost of the very aggressive move to the cloud but are boosting long-term growth. Merrill Lynch sees Oracle as a solid buy at current trading levels.