Despite S&P 500 Earnings Drag of Energy & Materials, Market Still No Bargain After Sell-Off

Now that earnings season is well into its second half, 24/7 Wall St. wanted to look at some of the core earnings power of the S&P 500 based on actual earnings seen so far. A majority of the S&P 500 has given earnings for the fourth calendar quarter, so we have a good snapshot of what earnings season will really tell for 2016. Things look truly awful here, but the real pressure has been from the energy and materials sectors. Without those severe drops, the S&P earnings trends actually would be positive. Another issue to consider is that the recent sell-off just has not taken the stock market into bargain territory.

S&P Global Market Intelligence sent us some great data for fourth-quarter earnings trends. All in all, the S&P 500’s aggregate earnings per share (EPS) of $29.00 for the fourth quarter was down 5.09% from the fourth quarter of 2014. Still, this represents a 128 basis point improvement from where growth bottomed on January 27.

On a sector by sector view, energy has been the biggest part of the decline, with a drop of 73.7% in EPS, and the materials sector was down by 17.7% from the prior year. Telecom services rose the most, with an 18.75% gain.

Only four of the 10 S&P sectors are expected to post positive earnings growth for the fourth quarter. In reality, this should be only three of 10 that are up worth noticing. Telecom’s 18.8% growth is expected to be followed by health care at 9.9% and consumer discretionary at 9.4%. The gain of 0.04% expected in industrials just seems too small to even count as positive.

Earnings were expected to be negative for energy and materials, with other drops as follows: financials (-5.4%), utilities (-5.0%) and consumer staples (-3.3%). Information tech is expected to be -0.5%.


ALSO READ: How Moody’s Sees Iran Coming Back Into the Global Economy

S&P Global Market Intelligence has a message of just how much the energy sector woes are killing the market’s earnings: “Excluding the energy sector drag, S&P 500 EPS growth would be +1.4% in the fourth quarter.” Of the 299 companies that have reported earnings, 199 of them have beaten analyst estimates. Another 45 have met estimates and 55 companies have missed estimates. While this equates to a 67% beat rate (versus a historic average of 66%), it seems worthwhile to point out that analysts took down many targets in earnings due to global weakness and due to currency strength hurting exports.

If we take what S&P said by sector as gospel, this market is only cheap if earnings power comes back fast in energy and materials. The harsh reality is that finding very many energy and materials bulls for real sector recoveries versus equity trading bounces is just no easy task at this time.

Maybe the market is not expensive at this time. It just isn’t cheap enough to get investors very excited, particularly if the recession predictions start to get a little more vocal. Now think about these issues: 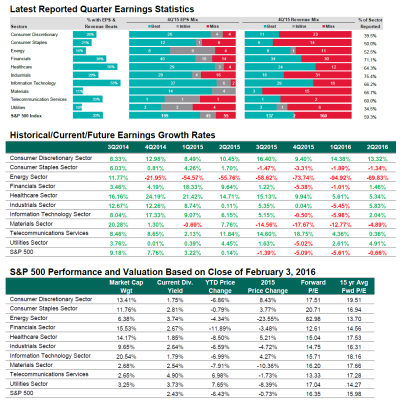