20 Companies Buying Back the Most Stock in 2016

Regulators are about to set JPMorgan Chase & Co. (NYSE: JPM) free to get its way on buybacks, at least that is the hope. CEO Jamie Dimon’s crew spent $1.696 billion for stock buybacks in the first quarter of 2016, for a total of $5.412 billion in its trailing 12-month period.

Still subject to the Comprehensive Capital Analysis and Review (CCAR) stress tests, Citigroup Inc. (NYSE: C) is therefore limited on how much it can spend on buybacks. Its dividend remains almost insulting. The company spent $1.620 billion in the first quarter on share buybacks, for a total of $6.784 billion in its trailing 12 months.

Though Goldman Sachs Group Inc. (NYSE: GS) spent $1.556 billion buying back stock in the first quarter of 2016, that was actually some $4.44 billion in the trailing 12-month period.

If you did not notice, 12 of the top 20 buyback companies in the S&P 500 are also members of the Dow Jones Industrial Average and another two of these 20 are former Dow stocks.

As far as why we are confident these will remain aggressive buyers of shares, most of these companies have cheap capital access and large cash reserves. That being said, how international cash locked up overseas gets treated after this presidential election, as well as the future of interest rates and the economic growth pattern, will all play a big role in the future of stock buybacks beyond 2016. S&P even said in its release:

The fourth quarter 2015 uptick in buybacks was a surprise to many in the market, but it continued in the first quarter of 2016. The pace of buybacks was partially driven by companies supporting their stock during the opening downturn of the year, which coincidentally started in early February when many earnings lock-ups ended.

The table below shows how each company’s buyback trends look versus the prior year and on a longer-term basis. It also shows how much each company’s indicated dividend liability is for a relative comparison. As a reminder, these are the largest buybacks from S&P 500 members. There may be other stocks that have recently gone after large buybacks that are not yet members of the S&P 500. 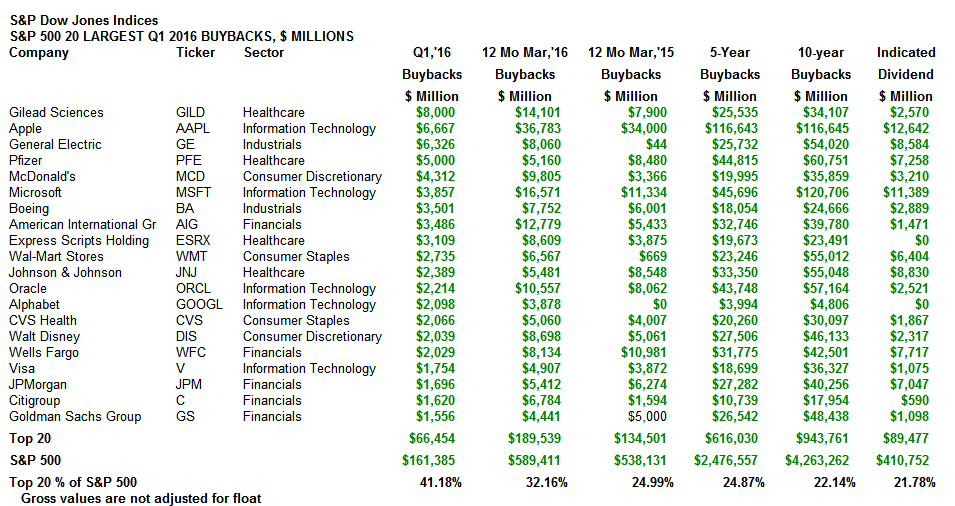