Despite being weak on Wednesday after seeing a 1% drop, GrubHub Inc. (NYSE: GRUB) was up almost 20% in just the past three weeks alone. It is also now up almost 150% from its 52-week low. The stock was featured earlier in 2016, at far lower share prices, as a stock that wins from the rising tide of the millennials.

GrubHub shares are up a whopping 77% year to date, with seven of those percentage points in the past week and 10 of them in the past month. GrubHub’s valuation is also a high-beta level, valued at close to 50 times expected 2016 earnings per share.

Petróleo Brasileiro S.A. (NYSE: PBR) has been a massive recovery machine. Much of the hope here was after anti-corruption efforts in Brazil might take the socialists out of power and that might get Brazil back on its recovery track. Petrobras recently said that its voluntary layoffs reached such high acceptance levels that it ended the program.

Investors need to keep in mind that Petrobras is not a normal oil company, and it is fully under the dominance and control of non-investor entities like the government and its union. Petrobras may be forced to operate at a loss, regardless of where the price of oil goes. Its shares are up 131% so far in 2016, and almost 20 points of the percentage gain is from the past month. Investors cannot use traditional earnings valuations on Petrobras.

Despite a perpetual price war and social media war with T-Mobile, Sprint Corp. (NYSE: S) has done well under the Softbank umbrella. Just do not forget that the Softbank umbrella keeps its shareholders without much real say here. Sprint recently finished third in a review of the top wireless carriers, but it added a record number of subscribers in the second quarter.

Sprint shares are up 75% so far in 2016, but the gains have been more muted of late despite recent highs. Sprint’s stock gains are 2% in the past week and 3% over the past month. Traditional price-to-earnings analysis is impossible to run here, so traditional valuations are elusive.

Sprint shares recently touched a new 52-week high of $6.45 and were as high as $6.43 on Wednesday. It has a consensus price target down at $4.45, and there are nearly four times the number of Hold/Neutral ratings as there are Buy ratings. Its stock is now up almost 200% from the 52-week low of $2.18.

Yelp Inc. (NYSE: YELP) is another one of these strong charts that is starting to take a breather after a 1.5% drop on Wednesday. Yelp’s largest run came in August, but shares almost hit a 52-week high all over again the same day. The online reviews site has managed to get past the disappointing earnings waves, and now analysts have been chasing its target prices much higher. Perhaps the move beyond covering restaurants has helped out here.

Yelp’s shares are up 38% so far in 2016, but they are up 88% from this time six months ago. The gain might have only been 4% in the past few days, but that is still up 23% over the past month. Investors might want to keep in mind that Yelp is still expected to lose money in 2016 and is still valued at 100 times expected 2018 earnings.

A review of each chart from StockCharts.com (expandable) has been provided below, versus the key exchange traded funds tracking the Dow Jones Industrial Average, Nasdaq 100 and S&P 500. 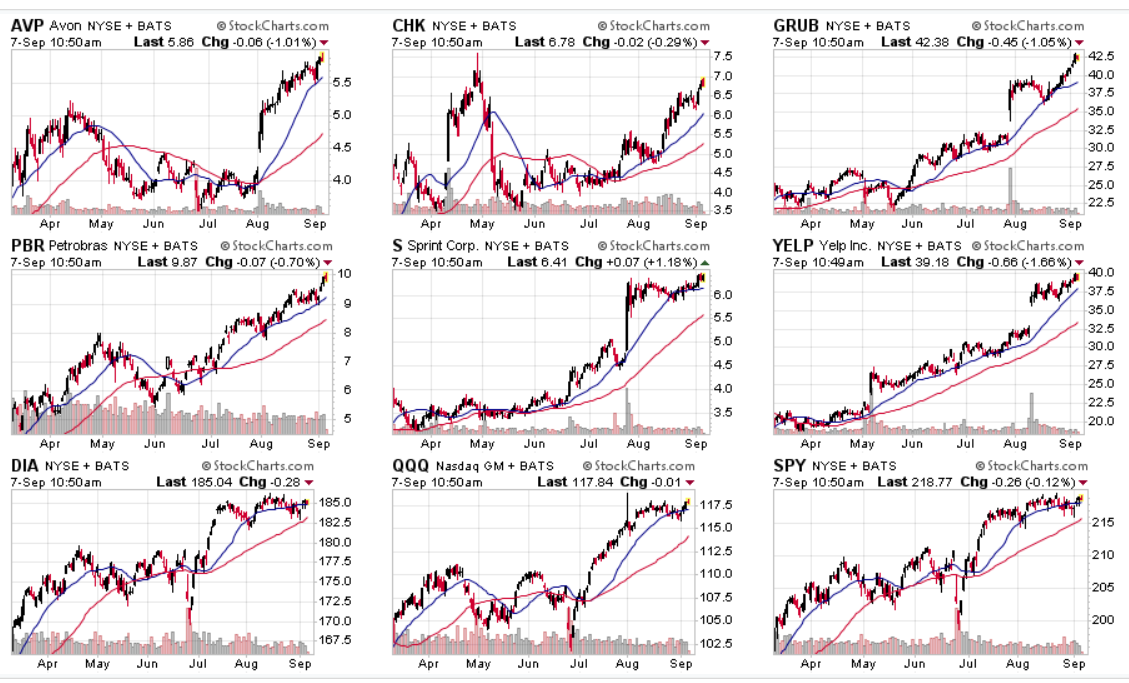