24/7 Wall St. wanted to look at the daily data for a comparison back to Black Monday on October 19, 1987. We have used the Dow as the major reference mark because back then the Dow was how even the most of the professional investors of the day referred to “the stock market.”

Now look back to the moves of 1987 versus today. There are some similarities in performance ahead of the 1987 crash (see charts below), but the real crash of 1987 was seen in a much shorter period.

The bad news about that 289.11 point rally over the next two days in October of 1987 was that the recovery was only about 57% of what was lost in a single day. And more bad news was that a range of roughly 2,000 to 2,050 in the Dow acted as strong resistance on the charts on multiple occasions for months and the market lingered for a long period.

There are many issues to consider about reference in 2020 to 1987. Pure technicians would suggest that chart comparisons always matter. Fundamentalists would argue that the modern economy is vastly different from then versus now, and it’s hard to ignore that only 12 of the Dow’s 30 components of 2020 were members of the Dow back at the time of the 1987 crash. IBM was the only tech stock in the Dow at the time of the 1987 crash, when most small and mid-sized businesses were still using typewriters.

Back in 1987 the market was dealing with a frothy performance, but the interest rate environment was night and day back then. There was no such thing as a coronavirus or any other type of virus that caused the 1987 crash, and they didn’t even really have OPEC to blame. The difference between then and now on the regulation side is that we now have tight trading curbs that prevent a free-fall of that magnitude from happening as rapidly, and interest rates are at extreme lows in 2020.

Perhaps the only good news here about what’s happening in 2020 is that the trading halts and trading curbs did appear to actually work. And let’s call it like it is — even as crappy as this trading day turned out to be, it almost felt like it could have been worse. 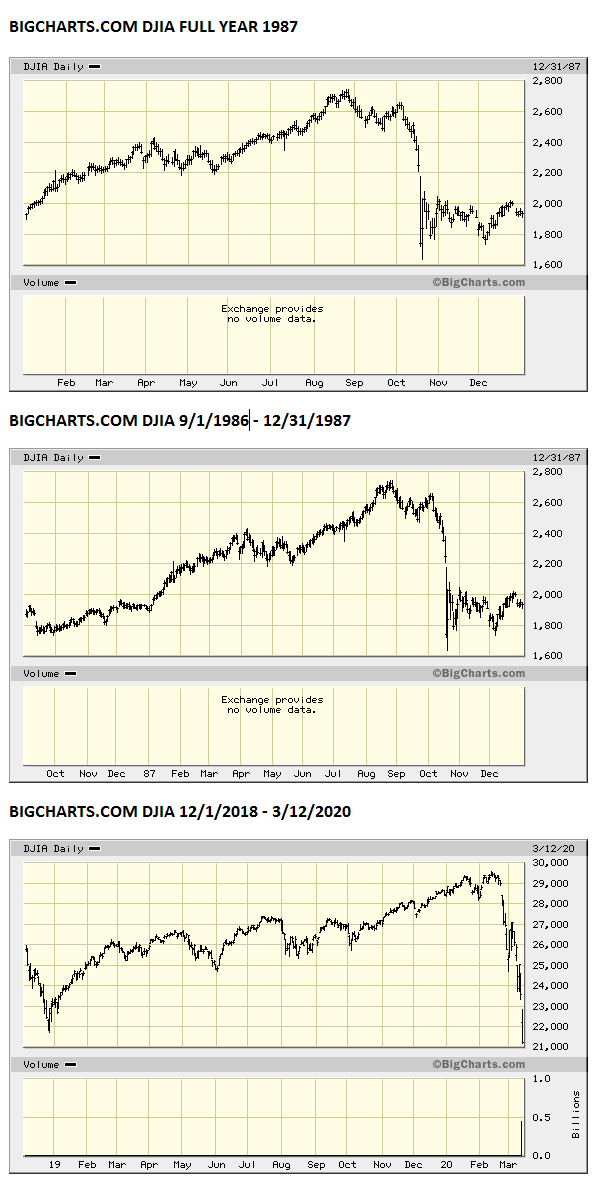