When the economy began to face an instant recession from the coronavirus, even before the name COVID-19 became labeled a pandemic, the phenomena of buying defensive stocks was thrown out the window. The problem is not that the companies had flawed business models. It was that things changed so rapidly that so many of the go-to defensive companies were forced into modified business operations in a way that they could not act defensively for investors.

24/7 Wall St. already tracked the key winners from the return of the consumer for retail, dining, travel, entertainment and so on, but there are some defensive stocks that still trade handily under their respective 52-week highs that had been seen before the selling picked up in February and went into a selling panic in March.

We wanted to focus on the reopening of the economy rather than just the news of “we will do whatever it takes” from Jerome Powell and rather than just focusing on the news that there was positive COVID-19 vaccine news. Most of these are not exactly the biggest growth names, but they are returning to their “defensive” status rather than being sucked into the same economic drag as many growth companies also saw.

These gains are also being seen on a day where the biggest losers of COVID-19 were seeing a massive recovery on hopes that things could start to normalize again. Any consensus analyst price target data comes from Refinitiv, and most of these companies are still handily below their 52-week or all-time highs.

Altria Group, Inc. (NYSE: MO) is the king of big tobacco in America, and both a reopening and a potential vaccine for COVID-19 might allow people to feel less worried about their smoking and vaping habits. The company manufactures deadly products, but its gain of 2.2% to $37.42 on Monday is against a 52-week range of $30.95 to $53.11. Altria’s dividend yield is 9% and its consensus analyst price target was $47.86.

American Electric Power Company, Inc. (NYSE: AEP) is one of the top power generation and electric utilities with a long history of focusing on dividend growth. AEP shares were last seen up almost 3% at $80.60, and while that is above the panic selling low of $65.14 the stock would still have to rise about 30% higher to hit its prior high of $104.97. AEP’s consensus analyst price target is $96.31.

American States Water Company (NYSE: AWR) may still be based in California, but the water utility was last seen trading up 5% at $78.70. It is still down from a high of $96.64 before the selling began, and it is also nearing its $79.00 consensus analyst price target.

American Tower Corporation (REIT) (NYSE: AMT) is the king of wireless telecom and data communications towers. After a 4.5% gain to $237.50 it has a $105 billion market cap. American Tower sold off to just under $175 in the peak selling, but its high was up at $260.43 before the panic selling. Analysts still have a consensus analyst target price of $267.36.

The Coca-Cola Company (NYSE: KO) was supposed to be very defensive in soda-pop and beverages such as sports drinks and bottled water, but its business faced insurmountable odds when all of a sudden they could not sell in venues such as airports, theme parks, movie theaters, restaurants and so on. Even the hoarding that was seen in February and March could not keep it being truly defensive, and it ran in trouble with operations in China much more than in the U.S. Coca-Cola’s stock was up 4.3% late on Monday, with a 52-week high nearly 30% higher at $60.13. Coca-Cola’s consensus analyst target price was $52.00.

Dollar Tree, Inc. (NASDAQ: DLTR) had been deemed as the lower quality comparable to Dollar General Corporation (NYSE: DG) for some time, but if things are going to normalize then it can recapture some of its major losses. After a 4.7% gain to $78.61, Dollar Tree’s 52-week range is $60.20 to $119.71 and its consensus analyst price target is $89.09. It pay’s no dividend that would be expected from a defensive stock (versus almost 0.8% for Dollar General), but Dollar General’s $182.27 share price (after just a 0.2% gain) hit a $185.00 high and that’s as big as it has ever been. Dollar General now also trades above its $177.52 consensus analyst price target.

Duke Energy Corporation (NYSE: DUK) was last seen up over 4.7% at $85.04 on Monday and it is one of the top electric utility operators in America. Duke saw its shares drop as low as $62.13 at the peak of the panic selling pressure, but it would still have to rally more than 20% to hit its old high of $103.79. Duke comes with a yield of more than 4.5% and its consensus analyst target price is $95.71.

Essential Utilities, Inc. (NYSE: WTRG), which is now a post-merger water and gas utility parent in Pennsylvania, was last seen up 6.1% at $41.50 on Monday. Its high from before the coronavirus was $54.52, and the consensus analyst price target is still up at $48.50.

McDonald’s Corporation (NYSE: MCD) saw its same store sales crushed as it had to close effectively became a drive-in model only. Now that the reopening is here, its shares were back up 3.6% to $180.00 on Monday. McDonald’s may not seem like the number one destination consumers want to go to, but it is still very affordable to dine there. Its 52-week range of $124.23 to $221.93 should spell out how troubling the last three months have been. McDonald’s has a consensus analyst price target of $202.61.

Mid-America Apartment Communities, Inc. (NYSE: MAA) had been considered a defensive stock because the REIT for apartment units had right at 102,000 units for rent and everyone supposedly has to live somewhere. The stock had fallen more than 40% from peak to trough as there were concerns that renters of all aspects would be skipping out or delaying rent payments, but while that happened the stability of rehires and the stimulus money at least brings back more hope. Mid-America Apartment’s stock was up almost 8% at $115.35 on Monday, with a 52-week range of $82.00 to $148.88 and with a $120.15 consensus analyst target price. its yield is close to 3.6%.

A 6-month candlestick chart montage from StockCharts.com has been added blow. 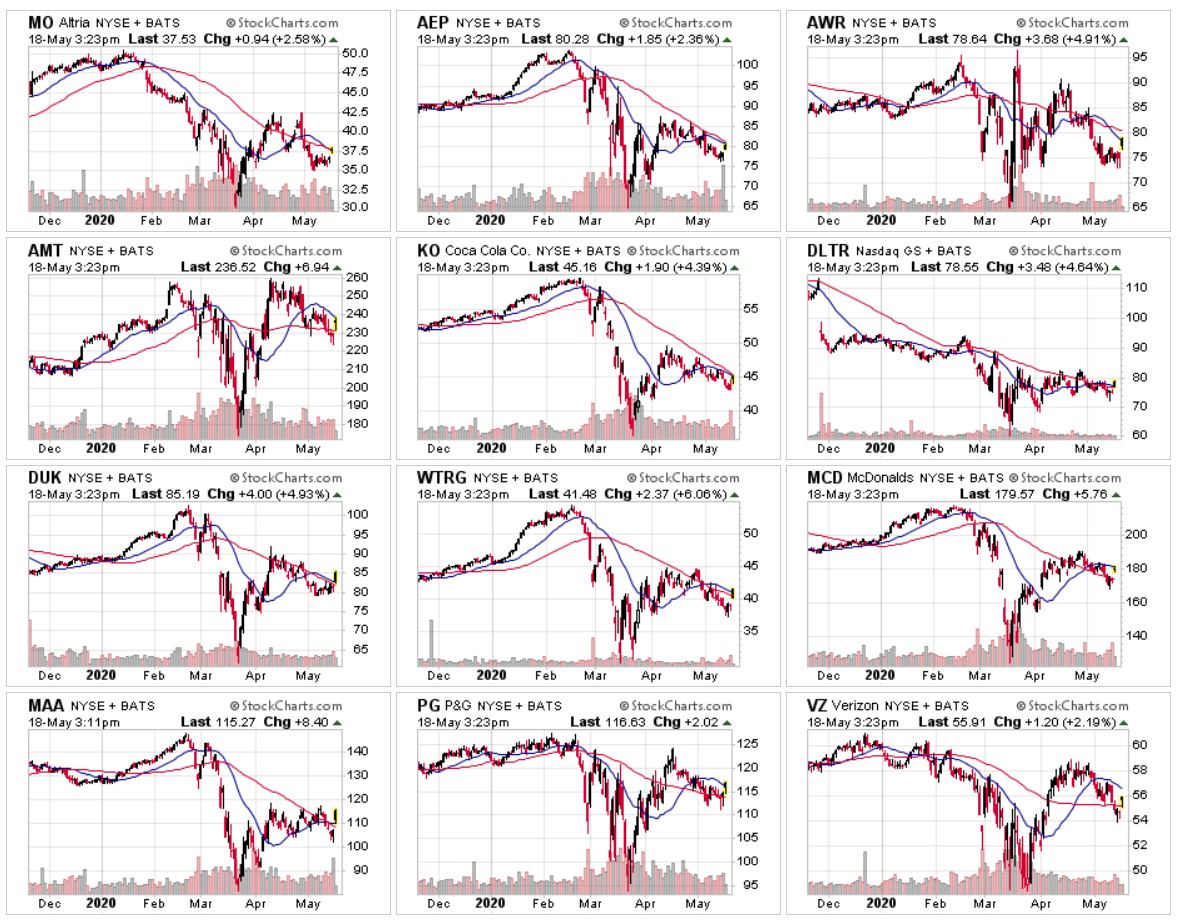