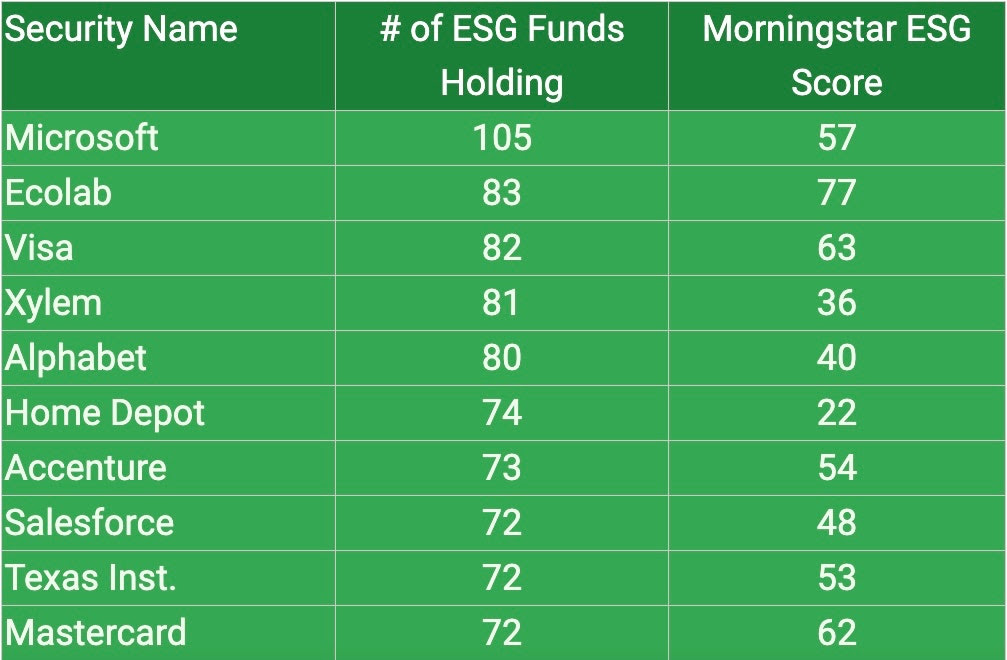 The booming number of environmental, social, and governance funds in the past year has drawn plenty of criticism for its inclusion of Big Tech, Big Finance, even Big Oil, and a look behind the curtain at the 20 most commonly-held stocks in ESG funds shows that for the most part what they all have in common is Big Cap.

Arguments abound about why Microsoft (MSFT), Salesforce.com (CRM) and Alphabet (GOOGL) are ESG stocks, and to some extent they make sense. But we can’t help thinking that performance also plays a major role in their selection. The top 10 stocks here, courtesy of Morningstar, all boast massive values as rewards for performance, as do the next 10 on the list, including Apple (AAPL, with an S&P Global ESG score of 29), Nvidia (NVDA, with a score of 74), Cisco (CSCO, 79), Procter & Gamble (PG, 60) and Verizon (VZ, 33).

A couple of notable outliers in the list are Ireland-based Trane Technologies (TT, ESG score of 75), and Aptiv Plc (APTV, 57), the electric component maker for vehicles — though both also have massive market caps. Merck (MRK, 39), Amgen (AMGN, 59) and Adobe (ADBE, 68) fill out the top 20.

The listings are worth remembering as you read Mark Hulbert’s interview below with StoneX Global Strategist Vincent Deluard, who argues that ESG funds and holdings are not radical enough to deal with the radical change needed to fight global warming. But for the moment, that’s what they are.

Take a look at the list in terms of funds that hold these stocks and in terms of their Morningstar ESG scores, which are instructive. Oh, and in terms of performance, it’s Nvidia by a mile — up 101% over the past 12 months.

EU notebook: More than half the world’s current hydrogen projects are in Europe. Can they work?

. . . . Europe is the undisputed leader in the nascent business of green hydrogen, with more than half the world’s current projects in developing renewable energy located in the region, writes Vish Gain from Dublin. With even coal-dependent countries in Eastern Europe — such as Poland — experimenting with hydrogen, Europe has staked its clean energy future on the idea. But cost concerns and political will are formidable opponents.

Significant challenges await Europe in its hydrogen plans. While Europe plans to install 40GW of electrolyzers (equipment to produce emissions-free hydrogen using water and renewable power) this decade, it has less than 0.1 GW of electrolyzers at the moment. To put things into perspective, that’s a 400 times increase in capacity planned in the space of 10 years. . . .

. . . . With major tech stocks topping the ESG ranks, StoneX global strategist Vincent Deluard tells Mark Hulbert why both current passive and active ESG strategies are insufficient to lead to radical change in how companies behave. The solution may lie in someone paying more taxes.

Question: But if we don’t get climate change under control first, then we could fix these other issues you raise and still end up with unsustainable societies.

Deluard: Even intelligent people, especially when they are blinded by ideology, can badly miscalculate risks. The Byzantines were famously holding a heated council on the sex of angels during the final siege of Constantinople by the Ottomans. Watching cable news during the riots in the U.S. Capitol felt a bit like that. I doubt the unfolding crises of the 2020s can be averted if the ESG movement’s ultimate effect is to funnel more money into tax-avoiding tech monopolies, pharmaceutical giants with few workers, and financial networks. . . .

. . . . There’s nothing like a climate disaster, such as we saw in Texas this week, for making investors re-evaluate their real estate plays, writes David Callaway. Real estate investment trusts (REITs) can typically provide great diversity, but the big players in the game can get hurt by regional turmoil as well. Strategists Scott Crowe and Uma Pattarkine at CenterSquare Investment Management in Philadelphia discuss their top picks, and why these energy users are ripe for a green revolution.