What the Biden climate order might say, plus Citi's new ESG platform 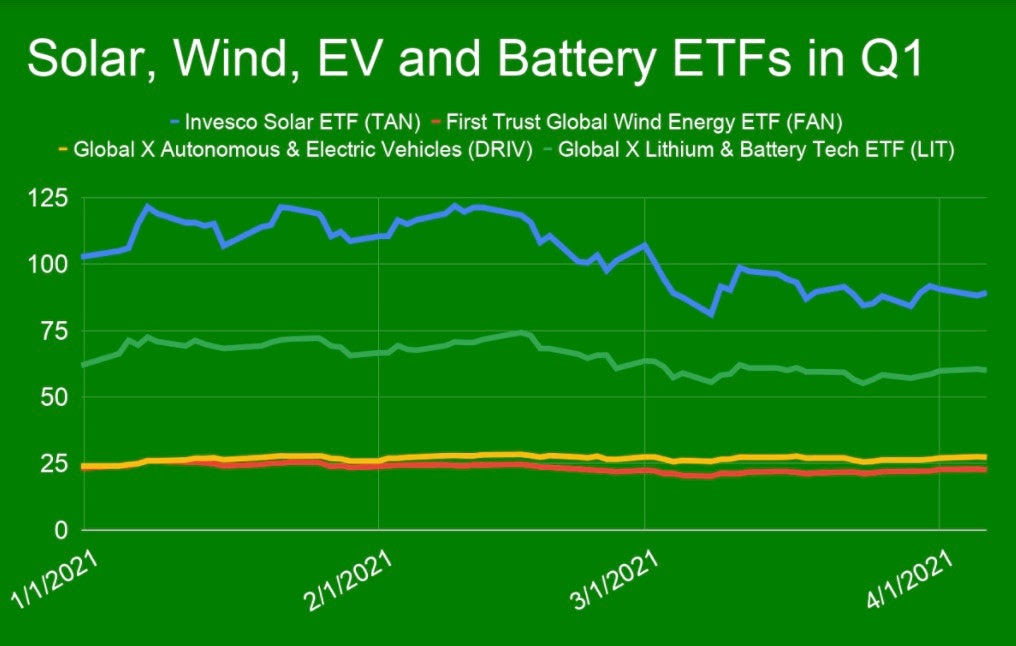 SPACs and NFTs may be the hot investing buzzwords of the day, but the growth trend in ESG investing continues unabated. U.S. money  flows into sustainable investing funds nearly doubled to $20 billion in the fourth quarter, according to Morningstar data. For the full year, U.S ESG fund flows rose to $50 billion from the previous record of $21.4 billion in 2019. Here’s a look at how some of the largest ESG funds with a specific focus on climate-related companies performed in the first quarter of this year.

He didn’t comment on when, but we can infer that it will likely be tied into the Biden Earth Day climate summit with other nations in two weeks. Such an order, coming alongside what is expected to be a commitment to reduce U.S. emissions 50% by 2030, would complete the “shock and awe” scenario the president seeks to announce America’s return to the world climate stage.

New Zealand established the first national disclosure policies late last year, but the U.S. order will more likely be tied directly to disclosure initiatives in the European Union, since they would impact large U.S. companies with business in Europe anyway, especially the big banks and asset managers.

Such policies would tie into the framework set up by the Task Force for Climate-related Financial Disclosures (TCFD). They would include identifying climate risks at the company, its vendors, and clients; establishing governance and metrics to monitor that risk; and financial penalties for companies that fail to report or misreport.

Kerry said the order would result in major shifts in capital around the world, akin to what BlackRock’s (BLK) Larry Fink predicted a few years ago. But this would be over a period of years and would not be a threat, initially, to the global bull market. At least not until the disclosures are broad enough and standardized to unveil the true cost of what adapting to these global warming will be. Let the risk-jockeying begin.

. . . . A new study claims European crop failures, led by cereal for livestock, have more than tripled in the past 30 years, victims of intense heat waves caused by shifts in the gulf stream, writes Vish Gain from Dublin. The failures have caused an increase in livestock prices and threaten to disrupt the global food supply chain. Read more here. . . .

. . . . A German lawmaker has demanded a halt to construction of the controversial Nord Stream 2 pipeline to Russia, which is 95% completed and supported by German Chancellor Angela Merkel, igniting speculation Germany may be changing its tune under pressure from U.S. President Joe Biden. Read more here. . . .

. . . . Citi’s (C) embrace of environmental, social and governance (ESG) practices under new CEO Jane Fraser will serve it well under new federal disclosure regulations, after it added ESG scores to its securities services platform for clients to measure the sustainability of their portfolios. Read more here. . . .

. . . . Europe’s bet on green hydrogen got a boost this week from a new report from Bloomberg New Energy Finance that said falling solar costs will allow hydrogen to be produced up to 85% cheaper in 2050, virtually eliminating natural gas as a competitor. Gas remains in the transition play for almost every economy, but this is another example of how the plunging cost of renewables might help the conversion from fossil fuels materialize faster than previously thought. Read more here. . . .