Moscow’s stock exchange opened Thursday morning for the first time since February 25. The reopening was only partial and subject to several limitations. For example, short sales are not allowed, and Russian brokerage houses may not sell securities owned by foreign clients.

Thirty-three of 50 stocks that comprise the Moex index began trading again for a shortened session, beginning at 9:50 a.m. and closing at 2:00 p.m. Trades could be settled in U.S. dollars or rubles, but all money must stay in Russia even if investors cash out completely. The Moex rose by nearly 8% for the day.

Russia will soon require that all natural gas sales to Europe be settled in rubles. President Vladimir Putin on Wednesday ordered Russia’s central bank to devise a scheme within a week to accept payment in rubles. Forcing natural gas buyers to pay in local currency helps Russia raise the value of its currency. The ruble traded at around 96 to the dollar Thursday morning.

Germany’s economy minister said that demanding payments in rubles is a breach of the contract between the two countries, and Italian Prime Minister Mario Draghi said, “My view is is that we pay in euros because paying in rubles would be a way to avoid sanctions, so I think we keep paying in euros.”

The United States has threatened to impose sanctions against China if that country exports to Russia products made with U.S. technology. Commerce Secretary Gina Raimondo told Reuters that all Chinese semiconductors use U.S. software to make their chips, and “[i]f we find that they are selling chips to Russia, then we can essentially shut them down by denying them use of that software, and we’re absolutely prepared to do that.”

In that vein, President Biden and other NATO leaders are expected to announce more sanctions on Russia later Thursday. Among other things, the alliance is expected to announce a strengthening of its forces in Eastern Europe and more military aid to Ukraine. Creating a no-fly zone over the country, a request that Ukraine President Volodymyr Zelensky has made repeatedly, is unlikely to be among the tougher sanctions.

Global banks are under pressure to remain in Russia, according to an exclusive report from Reuters Thursday morning. Custodial banks like Citigroup, JPMorgan and SocGen are being asked by other financial institutions for “reassurances on behalf of clients on each bank’s long-term plans for these businesses, which clear, settle and safeguard billions of dollars of Russian holdings.”

Citigroup reportedly has said it would continue to serve its clients “as long as sanctions permitted.” SocGen has made similar assurances. JPMorgan and Bank of New York Mellon already have indicated that they would continue doing custodial business in Russia.


ALSO READ: 5 Analyst ‘Strong Buy’ Stocks Pay Dependable Dividends and May Be Big Q2 Winners
Get Our Free Investment Newsletter
The EU-27 countries (not including the United Kingdom) received more than 57%

of their energy needs from Russia in 2020. Russia supplies nearly 27% of EU-27 crude oil and more than 40% of the countries’ natural gas. Visual Capitalist has created the following visualization. 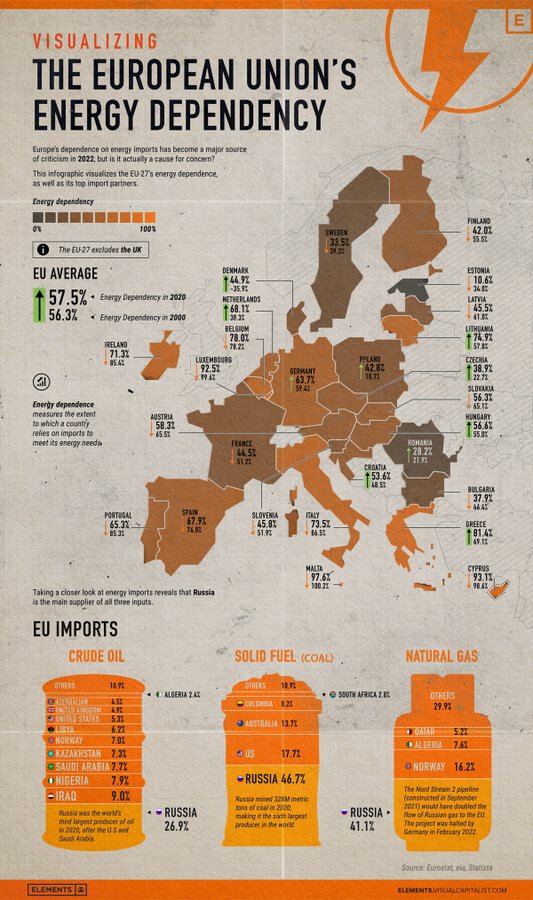