The outplacement firm of Challenger, Gray & Christmas on Thursday released its job-cuts report for March showing that a total of 60,587 planned U.S. job cuts were announced last month, a decrease of 21% compared with February cuts. The announced cuts were 14.3% higher than January’s total of nearly 53,000.

For the first quarter of 2019, the total of 190,410 announced job cuts was 35.6% higher than in the same period last year and reached its highest level since the third quarter of 2015. The first-quarter total is the highest for that period since more than 560,000 job cuts were announced in 2009.

All told, the auto industry reported plans in March to eliminate 8,338 jobs, bringing the first-quarter total to 15,887 jobs lost. Energy companies reported job cuts of 8,149 in March and total cuts of 10,548 for the first quarter.

Companies appear to be streamlining and updating their processes, and workforce reductions are increasingly becoming a part of these decisions. Consumer behavior and advances in technology are driving many of these cuts. Another major driver of the uptick in job cuts is economic uncertainty and fears of an upcoming downturn. Companies are reacting to market conditions as much as consumer demand.

The auto industry also yielded some good news. For the quarter, the industry announced plans to hire 18,650 new workers, about 3,000 more than it plans to cut. Andrew Challenger commented:

In order to move talent through the pipeline, we’ve seen a number of [automakers] offer buyouts or voluntary severance packages to thousands of their workers. Many of them are offered to workers who are 55 and older and who have been with the company for a number of years. It’s clear that companies are attempting to make way for new talent.

Financial firms reported the third-largest total of planned March job cuts with 4,884. The financial industry announced 9,570 job cuts for the quarter, an increase of 236.6% year over year.

Retailers announced 4,860 job cuts in March, but the industry easily leads in the total number of jobs lost in the first quarter with 46,601 losses. That’s 18.5% fewer losses than in the first quarter of 2018. Challenger also reported that so far in 2019 retailers have revealed plans to close 4,048 stores.


ALSO READ: The Labor Laws Your Boss Doesn’t Want You to Know About 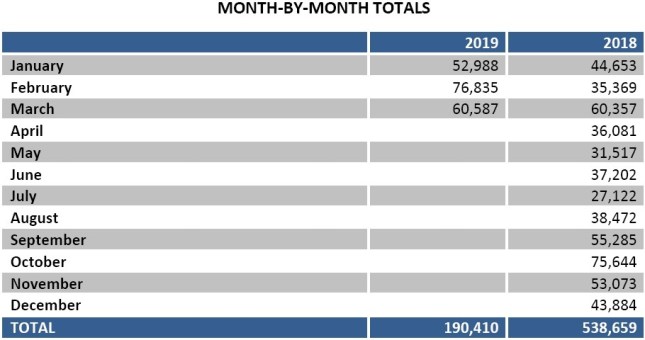