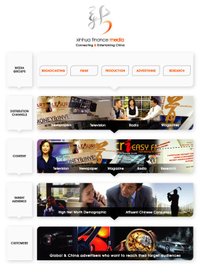 This morning there was a well-known and well-established Chinese media company that filed for an IPO.  Xinhua Finance Media Limited has filed for an IPO to raise up to $371 million representing 23 million ADR’s that represents 46.1+ million ordinary shares.  The estimated price range on this is $12.00 to $14.00, but don’t be shocked if and when that goes higher.

The proposed ticker is “XFML” on NASDAQ.  Underwriters are listed as UBS and J.P.Morgan as the lead underwriters, with CIBC World Markets, WR Hambrecht, and ABN AMRO also in the underwriting syndicate.  The full SEC Filing can be accessed here.

If you don’t know about Xinhua by now, then it is because you haven’t been reading news out of China.  They are a broadcaster, print, production, ad, and research firm in China that publishes in Chinese, English, and more.  They distribute through Newspapers, TV, Radio, Magazines, and online.  Xinhua’s content currently focuses on business and financial news as well as wealth management and affluent lifestyle programming.

Upon completion of this offering, Xinhua will be 36.7% owned by its parent (Xinhua Finance Limited), 8.0% owned by Patriarch Partners Media Holdings, and 5.8% owned by Fredy Bush (Chairman & CEO).  The company is based in Shanghai, China, but it is incorporated in the Cayman Islands.  Fredy Bush (a female Fredy) is well known and respected in Asia and those that know of her in business respect her.

It plans to use approximately $50 million to repay certain outstanding indebtedness to its parent and Xinhua Financial Network Limited, and it expects to make strategic acquisitions.  Please keep in mind that this still pulls upo under the old OTC-ticker of XHFNY, and that will need to be both clarified and rectified before this becomes a true free-float company.  This is definitely an IPO that IPO traders and investors will want to watch, or at least that is our belief based upon watching this company progress over the last 6 to 8 years.