When traders and investors see a hi-beta stock get a downgrade they generally take note.  But what about when they see a SELL rating?  That is exactly what happened to Netflix, Inc. (NASDAQ: NFLX).  Gabelli has issued a SELL rating in new coverage with a $144 price target on the stock.

Some of the concern is over competition from all sides from cable companies to telecom providers.  The earnings power is another item to consider, according to the research report.

Some of these same concerns and more have been voiced in December by short-seller Asensio, who also went as far as to say that Netflix was having its last great quarter and that competitors had zero barriers to entry.  We also saw how competition was even coming from Sears.  The most recent short interest data from the December 15 settlement date showed that Netflix was among all of the big high-priced momentum leaders that saw a decrease in the short selling activity.

The report from this morning noted that Netflix trades at “premium valuation”…. 24-times EBITDA and 48-times earnings for 2011.  The Gabelli model calls for Netflix to add 23 million more subscribers by 2014, but noted, “we do not expect the company’s earnings power to justify a valuation meaningfully in excess of the current stock price.”

Netflix shares were down over 2% briefly but the stock is currently trading down 1.6% at $176.85 in active trading.  For a review of the chart below, Netflix has been showing some trouble in getting back above its 50-day moving average ($180.62 on Thursday).  Its 200-day moving average is all the way down at $134.60 this Thursday. 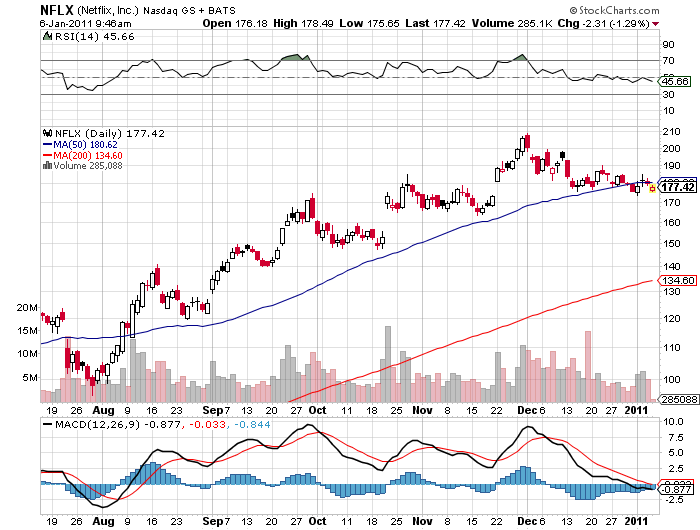