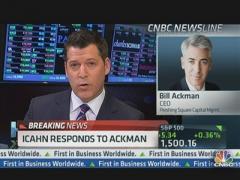 Source: CNBC
In what was supposed to be a CNBC interview with Bill Ackman about Herbalife Ltd. (NYSE: HLF) and nasty comments made this week about Ackman by Carl Icahn, CNBC ended up with a pit bull dog fight on its hands (or it created one). After asking Bill Ackman about the accusations made by Carl Icahn, Ackman accepted a request from CNBC to bring Carl Icahn on the phone live to answer some of the criticism. Needless to say, this turned ugly. Frankly this was a situation where the media took on a reality TV model in a fight between activist investors.

If you wanted to hear about bullying and attacking, Carl Icahn attacked Ackman, then Ackman responded in detail, then Icahn attacked back against Ackman and against CNBC swearing on the network’s live-air interview. Friday’s media game will end up getting played and played and it will likely end up being very popular. It also begs the question: What is going too far?

By now CNBC knows whether or not regular guests are going to be ugly or confrontational. Let’s just say that this got worse than ugly. Bill Ackman at least maintained his composure while Carl Icahn ended up coming across more egocentric than ever. Icahn ended up attacking the CNBC host, threatening to not come back on the show with him, and more and dodged answering whether or not he was long Herbalife shares yet. Here were some of the barbs: