Netflix Inc. (NASDAQ: NFLX) has been a strong performer, along with many of the key Nasdaq stocks. The world’s leading independent internet television network has been able to raise capital over time, and now the company is out with another large capital raise.

Monday’s investor communications showed that Netflix intends to offer 1 billion euros worth of senior notes. In dollar terms for U.S.-centric investors, that represents about $1.086 billion.

While this may sound on the surface like the company is looking for a creative need of cash, it is important to consider that Netflix’s market cap is now also $62 billion and its long-term debt as of March 31, 2017, was just $3.37 billion.

The offering is said to be outside of the United States and to non-U.S. persons under “Regulation S” and to qualified institutional buyers under “Rule 144A.” Investors might want to at least consider that Netflix is rated as B+ at S&P and B1 at Moody’s. Those are both speculative (junk) ratings, but not so much that Netflix would have to pay exorbitant spreads at the current time with its stock trading so close to all-time highs.

When Netflix reported its first-quarter earnings for 2017, the company confirmed that it has now surpassed $2.5 billion in quarterly streaming revenue. It also added 5 million members in total and noted that the growth of the global internet is gigantic. The company committed to keep investing as it increases membership, revenue and operating margins.

Some analysts have focused on the Netflix cash burn rates as reason of concern. This is how the quarterly cash balance (cash and short-term investments combined) has looked at the end of each quarter, according to Thomson Reuters, retroactively:

Along with the Netflix earnings issued in the days ahead of the debt capital raise, the company did address its international market exposure:

We have high satisfaction and are rapidly growing in Latin America, Europe, and North America. We are making good strides in improving our content offering to match local tastes in Asia, Middle East, and Africa, but have much progress to make, like in Latin America a few years ago.

Netflix now counts over 98 million members spread over 190 countries, and it counts more than 125 million hours of TV shows and movies per day. As of last Friday, that streaming customer count has crossed the 100 million mark.

A long-term stock chart from Thomson Reuters has been provided below. 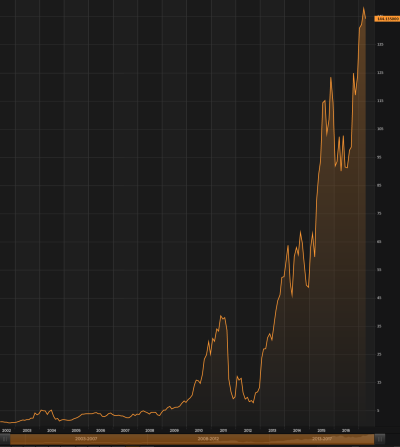