Do Americans Trust the News Media?

There was a time in the not-that-distant past when television network news anchors were revered as honest purveyors of news. Many newspapers also shared in that honor, as did some magazines.

As the relative handful of trusted news sources swelled to thousands with the widespread adoption of cable TV and the internet, trust is a commodity that may have become more a statement of political belief than anything else.

Of the 8,728 responses, 81 respondents were interviewed in depth in the newsrooms of these publications. Female respondents accounted for 51.3% of the total and most respondents (85.6%) were white. On an ideology scale of 1 (very conservative) to 5 (very liberal), the respondents skewed slightly more liberal (a standard deviation of 1.03).

According to the RJI report, researchers found three notable findings based on two models, one very conservative and one very liberal:

The report includes the following chart of the most, and least, trusted new sources: 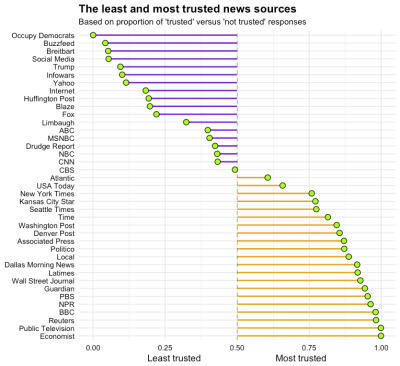 Visit the RJI website for more detailed methodology and more charts and results.