This Is How Google Shapes People's Attention to the News

Nearly as many Americans (43%) get their news online as from television (50%), and nearly a quarter (24%) get their news through search engines. Google search dominates U.S. search queries with a 63% share. That meets the somewhat squishy definition of a monopoly, according to the Federal Trade Commission (FTC).

A monopolist, according to the FTC, is “a firm with significant and durable market power.” When the FTC challenges a firm for being a monopolist, the courts generally do not side with the agency if a firm has less than a 50% market share. The inference, then, is that market share of more than 50% is necessary for a monopoly and that share must be sustainable over time. The FTC also looks at how a firm achieved its market power (whether through exclusionary acts or simply by being better than everyone else) and whether there is a legitimate business justification for a firm’s monopoly power.

A new study published last week examined issues related to how the dominant search engine shapes attention to the news, whether it provides a diversity of sources and ideological preferences in its curated results and what editorial criteria lead to its presentation of results. The researchers performed an algorithm audit that focused on Google’s Top Stories box that highlights news articles with headlines, images and links. The research methodology is described fully in the study. 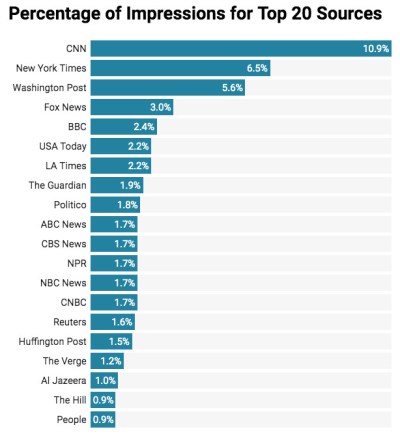 This concentration of sources can not only shape opinions or reinforce previous convictions, but it can also affect “how voters come to be informed during elections,” wrote Nicholas Diakopoulos, one of the study’s authors, in the Columbia Journalism Review. Using results of an earlier study in which Facebook users reported their own political affiliations combined with their own data, researchers found a “higher proportion of left-leaning sources appear in Top Stories.” The Facebook data is relevant because only slightly fewer (23%) users get their news from social media than from search engines.

Translating impressions into referrals (page clicks) is where Google and Facebook and other news and social media sites make their money. It also drives traffic to ad-supported news sites. According to Diakopoulos, “a very rough estimate would be that CNN received a 24 percent increase in referral traffic from Google from its article’s placements in Top Stories. NPR, on the other hand, perhaps got an increase of about 3.7 percent.” Google search queries also are being used by at least one analyst firm to help figure out how searches relate to product sales.

The new study does not address the reason some sources dominate in Google search results, and no one will really know “unless Google is more transparent with the editorial design and goals of news curation in the Top Stories box.” But Google’s algorithmic curation “converts to real and substantial amounts of user attention and traffic.”

Because Google captures so much search traffic for news, the company is open to attack on how its results are generated and how the benefits of those results are distributed. The company is being, or soon will be, asked to spell out, in Diakopoulos’s words, how it manages the “tradeoffs between the relevance desirable for individuals, the diversity desirable for society or democracy, and the fair competition desirable for news organizations.” Facebook won’t be able to avoid similar questions for too much longer either. The scandal over the spread of fake news is one reason why Facebook is among the companies with the worst reputations.