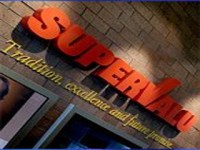 SUPERVALU Inc. (NYSE: SVU) is down and out, and the question is whether it is so down that it is out of time. Shares closed at $2.12 on Thursday against a 52-week range of $1.68 to $8.75. The company has been under a review for some time, but now the plot is thickening.

There are multiple reports that SUPERVALU is trying to find bids for the entire company, at a time when most of the interest has so far been on a piecemeal basis.

SUPERVALU has been the subject of multiple rumors over recent months. First it was a turnaround, then it was a failed turnaround. Then there was hope of a merger, but then the warning was just atrocious from the company and the shares tanked.

The company has only $64 million in shareholder equity as of its last balance sheet, but on a net tangible assets basis the company is listed as being -$1.577 billion.

Shares are indicated higher on Friday morning, but this is a company where the future is under question if no bidder shows up.