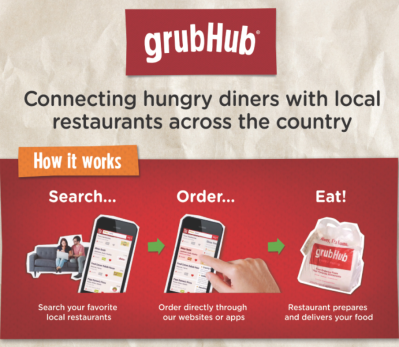 Source: GrubHub SEC Filing
The initial public offering (IPO) of GrubHub Inc. just got a bit pricier. The company is offering 4 million shares of common stock, and selling stockholders are offering an additional 3.03 million shares. We previously had a price range pegged at $20 to $22 per share, but now that range has been lifted in an amended SEC filing to $23 to $25 per share. GrubHub shares have been approved for listing on the New York Stock Exchange under the stock ticker GRUB.

GrubHub is the leading online and mobile platform for restaurant pickup and delivery orders. It processed more than 135,000 combined daily orders in 2013 and had approximately $1.3 billion of combined gross food sales on its platforms in 2013. GrubHub is also in more than 600 U.S. cities, and the company also claims to have some 3.4 million “Active Diners.”

Citigroup and Morgan Stanley are the lead underwriters of the offering. Other members of the underwriting syndicate are Allen & Co., BMO Capital Markets, Canaccord Genuity, Raymond James and William Blair. Both the company and the selling stockholders have granted the underwriters an option to purchase up to 1,054,500 additional shares of GrubHub’s common stock.

GrubHub will have 79,176,661 shares outstanding if the overallotment shares are exercised in full. At the mid-point of the new higher price range of $23 to $25, GrubHub’s market will be $1.9 billion — worth almost 14 times trailing revenues, and 20% of the revenues and half of the total customers of the trailing 12 months are from an acquisition.