Why the Worst May Be Over at Office Depot, Perhaps Staples Too 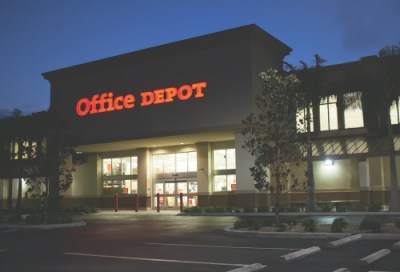 Source: courtesy of Office Depot
Office Depot Inc. (NYSE: ODP) remains an interesting stock, even a day after its severe earnings recovery reaction. The office supplies retailer saw its stock surge on Tuesday after offering a better quarterly report than expected. Investors would say that this news is more than welcome. Some investors might even consider that this is good news for Staples Inc. (NASDAQ: SPLS) as well.

The combined Office Max and Office Depot has some 1,900 stores, but the company telegraphed that at least 400 will be closed. Many of those closures will occur late in 2014, and many into 2015. By closing about 20%, investors feel like the company means business about cost management.

Credit Suisse has piped in on Office Depot with very positive comments. The firm raised its rating to Outperform from Neutral, and even raised its price target to $7 from $6.13. If the firm is right, Office Depot shares could rise by nearly 45%! Credit Suisse’s analyst Gary Balter said:

We believe the (Office Depot) reward/risk is quite favorable at this time. While the company will be fighting a constant secular decline battle, in our view it is taking a very reasonable and low bar approach to its prospects by building in negative pre-synergy operating earnings into its guidance. That we argue leaves room for upside and with the stock trading at less than 3 times cash flow, we see the opportunity for outsized stock appreciation should management exceed its projections.

The highest analyst price target of Office Depot is up at $8.00. Thomson Reuters listed the consensus price target at $5.84, with a median analyst target for the stock of $6.00. A $7 target is well above and beyond the middle-of-the-pack calls here.

It is true that Office Depot posted a wide loss on a net-net basis, but much of that is from one-time integration and merger costs. A key driving force behind the big post-earnings gain was that the company raised its annual cost savings target post-merger to more than $675 million by the end of 2016. The company’s previous outlook for its savings was closer to $600 million.

Staples has again not felt the love and affinity that Office Depot shares saw. The much larger Staples gained only a half percentage point on the day that Office Depot rose well into the double-digits. Staples is also much larger at $8.2 billion in market capitalization, more than three times the size of the $2.6 billion market cap for Office Depot. Perhaps this is a scenario in which Wall Street feels that a tail doesn’t wag a dog.

Another Wall Street analyst, Daniel Binder of Jefferies, reiterated his Hold rating on Office Depot. At the same time, he raised his price target to $5.25 from $5.00. Binder even raised earnings estimates for 2015.

Where the big rip comes is in the turnaround story. Office Depot is a long-time turnaround and a special situation due to its merger. If the company lives up to earnings estimates, it trades at a steep valuation of almost 45 times expected 2014 earnings. But then that valuation drops to only about 14 times expected 2015 earnings. And the company’s take on that $675 million in savings, that is not until 2016. There are problems it has to work through, but if the Credit Suisse estimate of $0.50 in earnings per share is hit in 2016, then Office Depot trades at only about nine times forward earnings expectations for that year.

Staples was the one that was supposed to have the Easy Button. Maybe Office Depot does too, and maybe investors have overlooked or forgotten about an Easy Button at Staples.