Office Depot and Staples: Now There Are Two 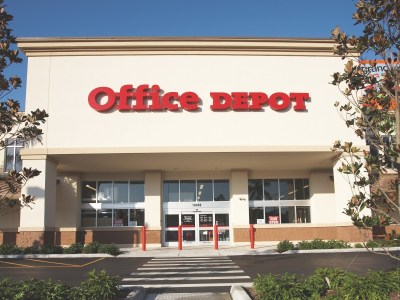 Source: courtesy of Office Depot
The merger of Office Depot Inc. (NYSE: ODP) and Office Max closed earlier in November and now the landscape for office supply stores includes just two major big-box players: Office Depot, which now carries a market cap of around $2.8 billion, and Staples Inc. (NASDAQ: SPLS) which is nearly 5-times larger with a market cap of more than $10 billion.

Staples has seen its shares rise about 36% so far in 2013. The stock closed at $15.48 on Friday and the consensus analyst price target of around $15.00 indicates that the stock is at least fully valued. The company is trying to expand its product offerings beyond toner cartridges and printer paper. It is adding restaurant supply products to its inventory and expects to begin serving other industries as well. Shares have traded in a range of $11.04 to $17.30 over the last year. With a fiscal year 2015 earnings per share estimate of $1.31, it is valued at nearly 12-times expected earnings.

Office Depot has seen its shares rise nearly 60% so far in 2013. In mid-February, when the merger with Office Max was announced, Office Depot’s shares tumbled from around $5 a share to around $4 and it took the company until mid-October to get back to $5. Shares were approaching $6 before the company reported third quarter earnings that missed earnings per share estimates. The stock closed at $5.23 on Friday and the consensus analyst price target of $6.20 indicates an implied upside of about 18.5%. Shares have traded in a range of $3.02 to $6.100 over the last year. With a fiscal year 2014 earnings per share estimate of just $0.32, it is valued at nearly 17-times expected earnings based an analyst’s report from BofA/Merrill Lynch following the merger closing.

One interesting thing about the BofA/Merrill Lynch report was its downbeat assessment of the office retail market:

While we remain negative on the industry as a whole, we believe ODP is in a far stronger position following the merger and believe there are significant opportunities to accelerate earnings through cost synergies, expense reduction and retail consolidation.

Staples forward earnings multiple might indicate a potential value stock were it not for the company’s stock being fully valued. Though only one analyst we’ve seen has so far weighed in on the office retail market, optimism is scarce for the sector.

Office Depot has to get the nod for a value play here simply because its opportunities really don’t have anything to do with its sales but rather with cost reductions. That’s a lot easier to achieve by closing stores and firing people than is re-thinking a business model, which is what Staples is trying to do.