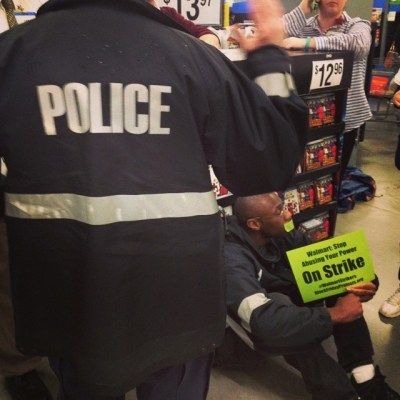 Source: blackfridayprotests.org
For the third consecutive year, strikes and protests are taking place at Wal-Mart Stores Inc. (NYSE: WMT) locations around the country. Protesters are seeking minimum pay of $15 an hour and full-time work on a regular schedule.

According to a press release from the United Food and Commercial Workers Union and a group of Walmart employees called OUR Walmart, “tens of thousands of Americans are protesting at 1,600 Walmart stores across the country today.” A strike occurred Wednesday at Walmart’s new store in Washington, D.C., and the job action will continue today. At the latest count, Walmart has about 3,400 supercenters in the U.S., 474 Sam’s Club discount stores, and about 475 smaller format and neighborhood stores.

A recent study by Michele Simon at Eat Drink Politics revealed that 88% of food bank clients have household incomes of less than $25,000 a year. According to Simon as many as 825,000 of the company’s 1.4 million U.S. employees make less than $25,000 a year. The Walmart protesters have demanded that the company pay all its full-time workers at least that amount and that it change its employment policies to move part-time employees to full-time with fixed schedules.

Walmart employees and community members who support their efforts are continuing a hunger strike outside a Walmart store in Los Angeles, and workers and supporters in Denver are delivering a bag of coal to Walmart.

More than 22 million people visited a Walmart store on Thanksgiving Day according to a company press release issued in the wee hours Friday morning. The company also said that Thanksgiving Day online sales were the second only to last year’s Cyber Monday sales for the best ever.