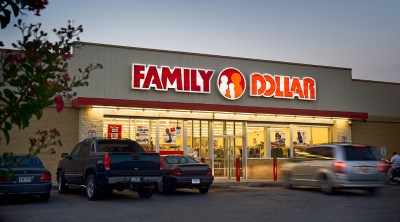 Source: Family Dollar Store Inc.
Shareholders of Family Dollar Stores Inc. (NYSE: FDO) voted on January 22 to approve the merger with Dollar Tree Inc. (NASDAQ: DLTR). As a result, Merrill Lynch has come forth and removed Family Dollar’s rating, as it is no longer trading on the fundamentals. The brokerage firm said that Dollar Tree’s synergies were discounted but not its integration risks, and so Dollar Tree was given a Neutral rating.

Dollar Tree was given a price objective of $80, with the rationale that while its earnings momentum has been impressive, the firm thinks these positive trends could be overshadowed by Family Dollar. Dollar Tree has acquired and integrated other companies before but not on the scale of Family Dollar.

On the other side, Dollar General Corp. (NYSE: DG) is considered to be in the doghouse with few catalysts, and the company was given an Underperform rating. It has been up 25% since Dollar Tree announced its bid for Family Dollar, but management has few options besides delivering exemplary results, and this has not been the case recently.

Dollar General was given this Underperform rating by Merrill Lynch for six reasons:

ALSO READ: Is a Buyer Knocking on Avon’s Door?