A project first reported last December was more or less formally announced Friday morning. Amazon.com Inc. (NASDAQ: AMZN) showed off its first Amazon-branded Boeing 767-300 cargo plane at an air show in Seattle. The company said that there are currently 11 planes in a dedicated fleet that will eventually total 40.

Both companies are leasing 20 converted 767-300 freighters, so Boeing Co. (NYSE: BA) is not going to see any new orders for the planes. Neither Air Transport Services nor Atlas Air currently appears on Boeing’s order book.

Prime Air, as Amazon calls its service, began trials of its service about a year ago at an airport near Wilmington, Ohio, with delivery service to Allentown, Pennsylvania; Ontario, California; Tampa, Florida; and Oakland, California. Amazon operates distribution centers near all four destination airports. The project was code-named “Aerosmith.”

Lease rates are closely guarded industry secrets. We found a 2015 estimate for a 767-300ER passenger jet of $150,000 to $480,000 a month, but that plane has an extended range and is not really comparable. It does give us a rough idea of the cost to Amazon though.

In June an analyst at Pacific Crest estimated that Amazon could save $440 million annually on shipping packages on its 40-plane fleet. He estimated a savings of $5.82 per package shipped.

All 40 Prime Air planes are expected to be operational by 2018, which Moody’s estimates will allow Amazon to deliver up to 30% of its current shipping volume on its own planes. That is not good news for either United Parcel Service Inc. (NYSE: UPS) or FedEx Corp. (NYSE: FDX). The payload capacity of Amazon’s fleet will be approximately equal to 26% of UPS’s capacity and 17% of FedEx’s, according to Moody’s. 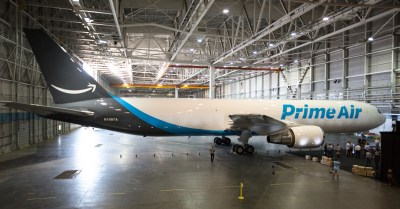