Whether or not a retailer had a good 2017 holiday season probably depended on what goods were on offer, at what price and in which channel (brick-and-mortar or online). The average forecast for year-over-year sales growth came in at 3.8% while the National Retail Federation had forecast growth of 3.6% to 4.0% year over year.

In a report Tuesday from Mastercard based on actual transaction data, the company estimated overall sales rose 4.9% and online sales rose by 18.1%. While the weather may have a slightly positive effect on online sales (if the weather is awful and you need to finish your shopping, retail websites are open and warm and you don’t need to drive to get there), brick-and-mortar retailers are far more sensitive to the weather’s effect on store traffic.

According to business weather researchers at Planalytics, the week before Christmas was a warm one, the warmest since 2015 in fact, with all regions except New England showing warmer temperatures than last year.

For local stores that means that the sale of seasonal clothing like hats, scarves and gloves are likely to trend softer. Planalytics calculated weather-driven demand (WDD) — the percentage of lift or drag that weather alone has on sales compared to the same period a year ago — for the week ending December 23. The data showed that weather-driven U.S. sales of hats and gloves were 7% lower than for the same period a year ago. The map shows the effect of weather-driven demand on the lower 48 states: 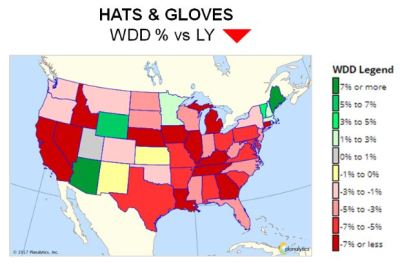 Only in Maine were sales of hats and gloves 7% or more higher than last year, while sales were down 7% or more in the eastern half of the United States, where temperatures were well above normal and last year (LY) throughout the week, softening seasonal demand. The Mid-Atlantic, East North Central and East South Central regions were all warmest since 2015.

According to Mastercard data, specialty apparel and department stores, where most of their holiday sales happen, saw only “moderate” gains. Had the weather been colder, sales of seasonal gear almost certainly would have been better.