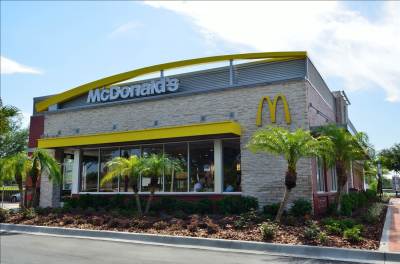 Source: McDonald's Corp.
Same-store sales for McDonald’s Corp. (NYSE: MCD) were bad in July and worse in August. The company reported Friday morning that U.S. same-store sales fell 2.8% year-over-year, that European sales were down 0.7% and that Asia/Pacific, Middle East and Africa (APMEA) sales dropped 14.5%. Globally sales were down 3.7% year-over-year for the month, significantly worse than the 2.5% global decline in July.

The decline in U.S. sales is blamed on “broad-based challenges” that face the entire fast-food industry. What this means for investors is spelled out: “Soft top-line results are expected to pressure U.S. margin performance in the third quarter.”

European sales, which rose slightly in July, fell as the company faced issues in Russia where stores were temporarily closed after mass inspections by the government’s food safety agency.

The troubles in the APMEA region continue to be related to the supplier problems the company has faced for the past few months in China. A Chinese supplier sold outdated and mislabeled meat to McDonald’s stores in China and Japan. The supplier, Shanghai Husi Food, a Chinese company owned by Illinois-based OSI Group, also supplied meat products to Yum! Brands Inc. (NYSE: YUM) restaurants, Starbucks Corp. (NASDAQ: SBUX) and Burger King Worldwide Inc. (NYSE: BKW).

McDonald’s also said that third-quarter results will be down $0.15 to $0.20 per share compared with the third quarter of last year as a result of lost sales, expenses associated with the company’s efforts to recover from the supplier problems in China, and the impact of the recovery efforts on the company’s tax rate.

During August, McDonald’s global business faced several headwinds that impacted sales performance. As a System, we are diligently working to effectively navigate the current market conditions to regain momentum. For the long term, we remain focused on strengthening the key foundational elements of our service, operations and marketing to maximize the impact of our strategic growth priorities for our customers and our business.

U.S. sales were down 1.7% in the first quarter of this year and another 1.5% in the second quarter. For the year to date, global same-store sales are down 0.7%.

ALSO READ: The Worst Economies in the World