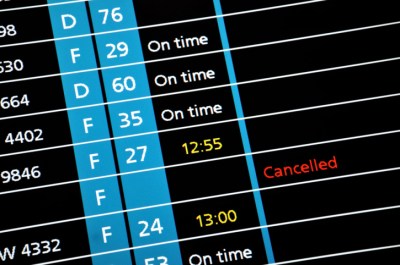 The data come from masFlight, a data and analytics company focused on aviation operations that integrates multiple data sources to create reliable, end-to-end records for global flight operations. The company has modeled different aircraft types and configurations, different costs for domestic compared with international flight, financial impact on leisure vs. business travelers, low-cost carriers compared with legacy carriers and rebooking options for passengers to arrive at an overall average of $5,770 per cancelled flight segment.

Each of those 9,000 cancelled flight segments in the past 30 days cost the airlines an average of $5,770 and that runs to a total of nearly $52 million for just the past 30 days. And that’s during a time of the year when the weather is not particularly nasty.

Costs vary widely. A large wide-body jet like a 777 or 747 from Boeing Co. (NYSE: BA) or the A340 from Airbus that flies international routes can cost nearly $43,000 for a flight that is cancelled due to an event the airline should have been able to control (e.g., missing crew or maintenance) compared with about $13,000 for a cancellation due to an uncontrollable event like weather. Canceling a small regional jet flight costs $2,750 if it could have been controlled and about $1,000 if the cancellation was due to an uncontrollable event.

There are a few other observations we noted. Regional jets cancel 2.6% of their scheduled flights compared with just 1% of narrow-body jets (the Boeing 737 and Airbus A320) and 1% of the wide-bodies. More than two-thirds (69%) of cancelled flights on regional jets are of the uncontrollable variety, while that number falls to 58.2% for narrow-body jets and declines to a very low 42.8% of wide-bodies.

There are a couple of good things about a cancelled flight, from the carrier’s point of view: no fuel is used and no airport and landing fees have to be paid. But those are included in the calculations from masFlight. The costs include paying a crew that isn’t going anywhere, paying for maintenance for no reason, perishable food, airport fees and parking, refunds and rebooking fees, passenger accommodations and displaced revenue from having to put those passengers on another flight.

The takeaways: low-cost carriers don’t get punished as badly as legacy carriers; the more business/first-class customers on a cancelled flight the more it costs the airline; lower fuel costs mean a smaller offset against the costs of cancelling a flight; and difficulty in booking passengers later due to full planes (load factor) makes matters worse.

ALSO READ: 8 Companies That Have Seriously Damaged Prospects for Investors

This Is the Oldest Restaurant in America

This National Park Has Grown the Most in Popularity Since 1980