Yet, Uber may be gaining some of that loss back finally, following reports that the ride-hailing services company is on the cusp of making an offer of around $2.6 billion for privately held delivery service Postmates. Just Eat Takeaway paid $7.3 billion for Grubhub.

Grubhub’s 52% share of the New York City market and 39% share in Boston top Postmates 35% of the Los Angeles market, the city where Postmates has its largest share. The company’s next largest market is Phoenix, where it trails DoorDash (43%) and Uber Eats (24%) with a 19% share.

While a tie-up between Grubhub and Uber Eats was drawing lawmakers’ attention even before it could happen, it’s unlikely that a merger between Uber and Postmates will draw similar attention. The following chart from research firm Second Measure shows market share in major U.S. metro areas for the month of May. 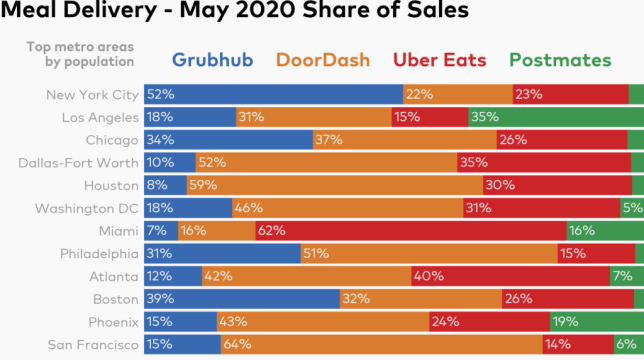 Overall, in the United States last month, DoorDash captured 45% of the food delivery market. Grubhub had 23%, Uber Eats 22% and Postmates 8%. Acquiring DoorDash could have cost Uber around $16 billion or so and the company would have had even more trouble from regulators than for the failed swing at Grubhub.

Each percentage point of U.S. market share cost Just Eat Takeaway about $317 million. If Uber ends up paying $2.6 billion for Postmates, each point of market share will cost it about $325 million.

According to Crunchbase, Postmates has raised a total of $903 million in funding and was valued at $2.4 billion at the most recent capital raise.

But what’s in it for Uber? Another look at the chart shows that Uber-Postmates will have 50% of the Los Angeles market, 88% of the Miami market and 47% of the Atlanta market. Combined, the two firms will have about 30% of the market and likely just a routine regulatory review.

That big chunk of the Los Angeles market could be costly to operate, however, if the state law requiring drivers to be considered as employees, not independent contractors, withstands a November ballot initiative. Uber, DoorDash and Lyft Inc. (NASDAQ: LYFT) have chipped in $30 million each, with Instacart and Postmates each kicking in $10 million, to allow companies that employ app-based drivers to continue to treat those drivers as contractors. Lyft does not offer food delivery.

The lockdowns in April and May due to the COVID-19 outbreak introduced many Americans to the new food delivery services. Paying a bit extra to have meals delivered was preferable for many to risking becoming infected with the virus. It remains a gamble that demand for delivery services will remain robust once the pandemic is controlled.

ALSO READ: Telehealth Is Here to Stay: 4 Stocks to Buy Now With Huge Potential
Get Our Free Investment Newsletter