No Deal for Grubhub, More Pain for Uber Stock?

Uber stock dropped by more than 6% overnight. Wall Street had viewed the bid for Grubhub as a winning move for Uber. The company’s ride-hailing business had been battered by stay-home orders in many large cities and the company’s food delivery service, Uber Eats, had picked up some of the slack.

As the lockdown orders are gradually lifted, however, it’s uncertain what the effect will be on Uber as local restaurants reopen and people return to work. Will Uber’s ridership pick up or will more people continue working from home? Will food delivery services maintain their newfound popularity once people begin moving around again?

Then there’s what Uber views as an existential question: what happens if the company loses its battle to treat its drivers as independent contractors instead of as employees? The company has said that treating drivers as employees could add as much as 30% to its costs.

Uber and competitor Lyft Inc. (NASDAQ: LYFT), along with other ride-hailing and food delivery companies, have contributed more than $100 million to a fund seeking to overturn a California state law that went into effect in January requiring the companies to treat drivers as employees, not contractors.

What the Uber-Grubhub Deal Was All About

The food delivery market is a crowded one. In addition to Uber and Grubhub, DoorDash, Postmates and a host of other local competitors compete for the business. A merger of Uber and Grubhub would have resulted in a single company with nearly half the U.S. market. Along with DoorDash, the three firms would have controlled about 90% of the market.

That’s what a tie-up between Uber and Grubhub would have been all about: scale. As it has been for more than two years, the food delivery business is a highly competitive, low-margin business and, as Amazon discovered, if the service can’t be among the top two or three in a given market, getting out is a good choice.

According to May 2020 data compiled by Second Measure, Grubhub had 52% of the market in New York City while Uber Eats had 23%. In Boston, the combined Uber-Grubhub market share is 65%. 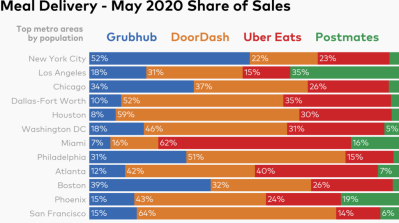 DoorDash is strong in Dallas-Fort Worth and Houston, where it claims 52% and 59%, respectively, of the market. In San Francisco, DoorDash commands nearly two-thirds of the market share.

Smaller firms like Postmates and Waitr struggle for share in big markets and may have to turn to smaller markets, although that could drive costs up and make slim margins even slimmer.

The (Dis)appearance of Ghost Kitchens

Not every restaurant offers a take-out menu. For those that don’t, Grubhub and some others list restaurants with which they do not have a contract. When a customer contacts Grubhub for a delivery from such a restaurant, a Grubhub employee figures out how to place an order for pickup and make the delivery. Sometimes it can and other times it can’t.

Another business model is the so-called ghost kitchen. These are food preparation locations that do not have a dine-in storefront. Instead, the kitchens (often several in one location) serve only take-out food and many have contracts with specific delivery services.

Last week, Uber Eats, which had bankrolled ghost kitchens in some European cities, including Paris, revealed that it had pulled out of the business. The Paris operation, called an Eats Delivery Hub, was started in November 2018 and quietly closed at the end of 2019 as part of Uber’s cost-cutting strategy.

In some ways, virtually every restaurant became a ghost kitchen following the imposition of stay-home orders. What some restaurateurs saw as a death blow, others saw as an opportunity.

Uber founder and former CEO Travis Kalanick has formed a startup called CloudKitchens to house more ghost kitchens. The company is testing the concept in Los Angeles and reportedly has plans to enter additional markets, including Chicago, San Francisco and cities in China.

Where the ghost kitchens have failed to make a dent is among top-rated restaurants that do not offer take-out service and have no intention of doing so. Renowned Los Angeles-based chef Eric Greenspan told the Financial Times, “I just think that we’re in a different business. They’re in a global domination, facilities business. I just want to make you a great fried chicken sandwich.”

Going After the National Chains

Talking about scale, the big delivery services have begun signing delivery deals with some large national chains. DoorDash officially teamed up with Little Caesars, a brand that has never previously offered delivery. DoorDash has other deals with Wendy’s and Chick-fil-A, and McDonald’s, the biggest fast-food chain in the country, offers delivery with Uber Eats.

The deal between McDonald’s and Uber Eats has not been an unqualified success. In the United Kingdom, the delivery service could not keep up with the order volume. In the United States, many McDonald’s franchisees have complained about additional fees. The partners reportedly are renegotiating the deal.

Growing its Uber Eats business is important to Uber, but getting the ride-hailing service back on track is far more important and could face stronger headwinds.