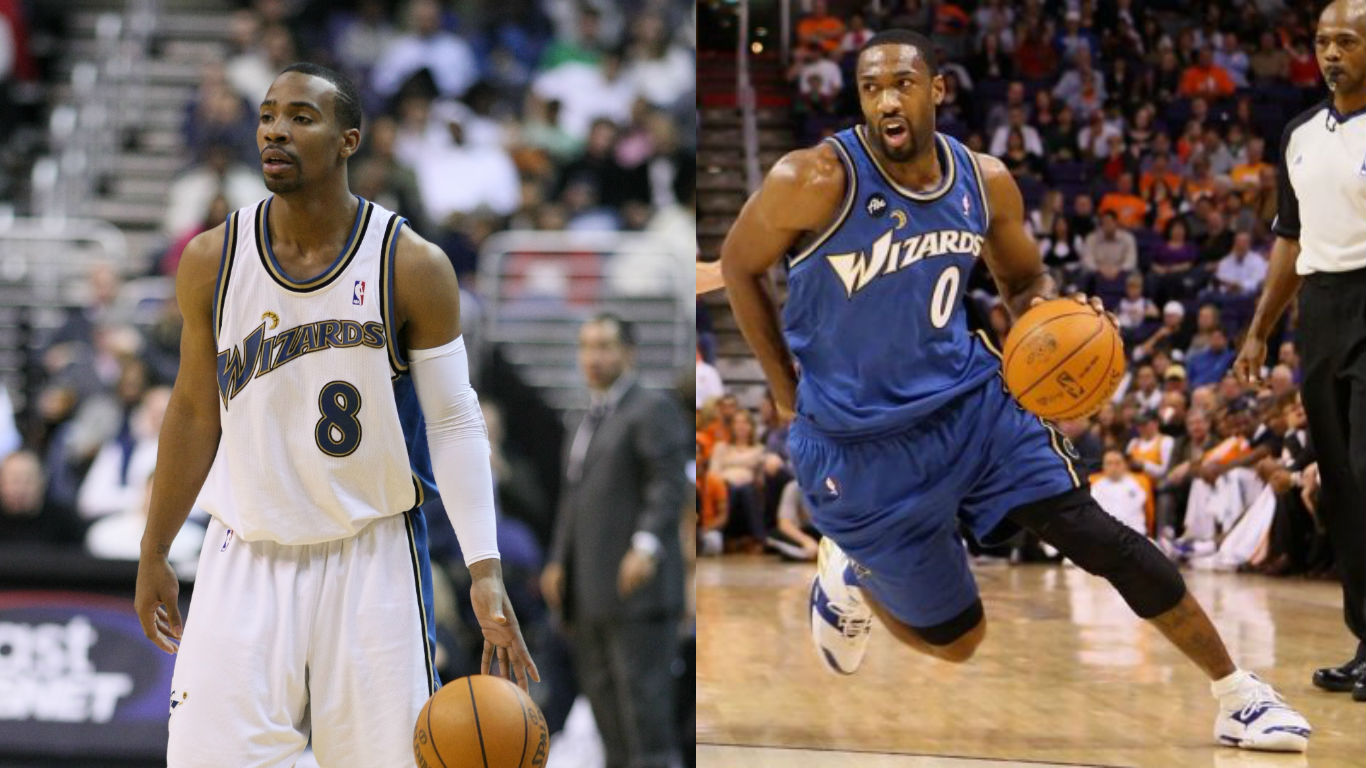 Typically, bad blood emerges between foes, but sometimes teammates can get into it as well. Gilbert Arenas and Javaris Crittendon both played for the Washington Wizards in 2009 when they got into a legendary intra-team beef over a card game. After losing money on the game, Crittendon reportedly got into a heated argument with center Javale McGee. Arenas jumped into the squabble, and things eventually escalated to the point where Arenas and Crittendon threatened to shoot one another, according to Arenas.

In a later interview, Arenas said he was simply calling Crittendon’s bluff when he brought four unloaded guns into the team’s locker room and offered to let Crittendon use one. However, Crittendon reportedly had his own weapon, which was loaded, and he pointed it at Arenas. Thankfully, the incident never went any further. As reports of the standoff emerged, both players were suspended for the rest of the season. Crittendon never played in the NBA again, and he is currently serving a prison sentence for voluntary manslaughter. 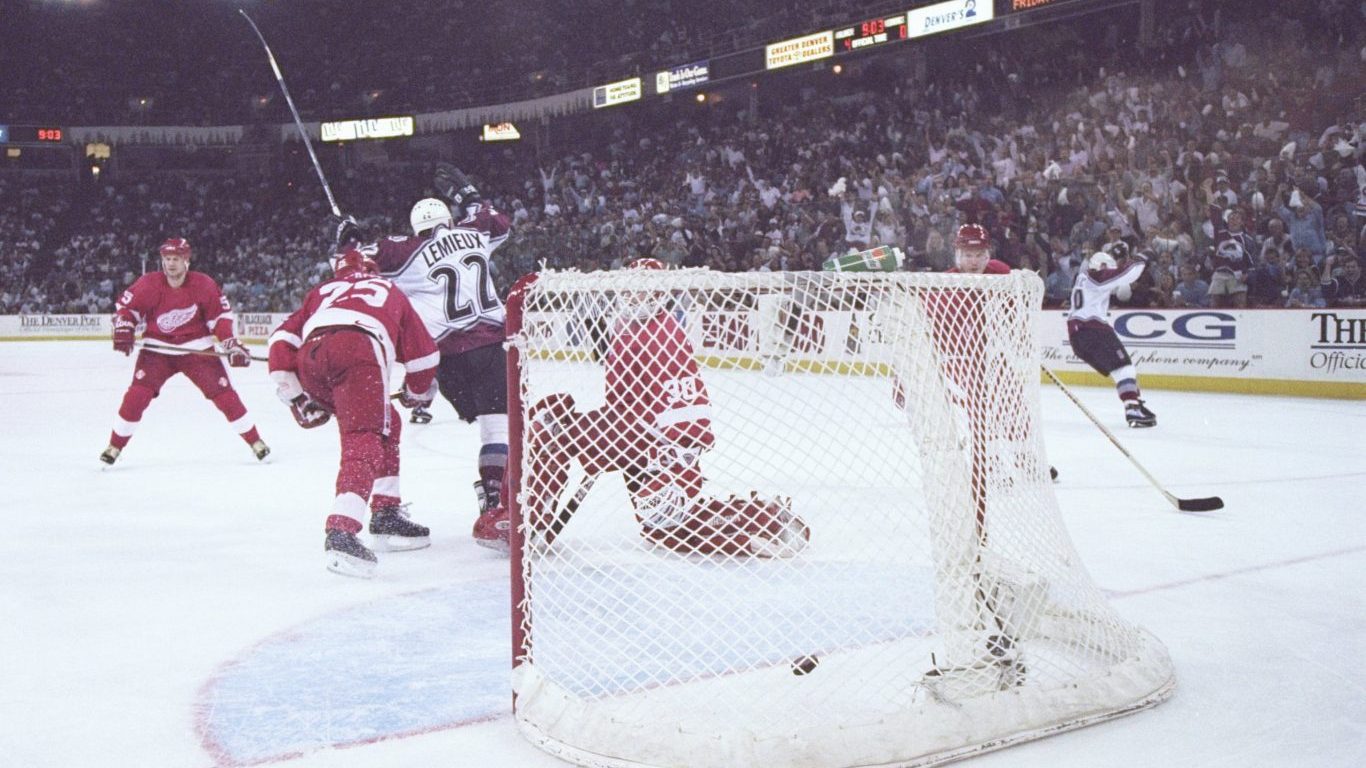 There was an intense rivalry between Detroit Red Wings and Colorado Avalanche in the 1990s. Important playoff games between the two were often marred by brutal cheap shots and vicious fights. The teams were locked in a tough, physical battle filled with fights during the 1996 Western Conference Finals. The rivalry escalated when Colorado’s Claude Lemieux shattered the face of Detroit’s Kris Draper with an illegal hit into the boards — an event almost the entire Red Wings team missed when it happened. That game was a 4-1 loss that ended Detroit’s season, so they had to wait until the following year, when the Avs were reigning champions, to get revenge.

The next season, Avs-Red Wings games were testy affairs, with several Colorado players getting knocked out of the game after being slammed into the boards. When the teams played again in March 1997, things erupted into an all-out melee, with Darren McCarty walloping Lemieux before scoring the overtime game-winning goal. The teams met, and fought, again in the Western Conference Finals. This time, Detroit won the rivalry on their way to winning the Stanley Cup. The feud was still far from over, as McCarty and Lemieux dropped the gloves and fought again the next season. Afterwards, McCarty said, “I still have no respect for him as a human being” in regards to Lemieux. This beef may be never-ending. In 2019, McCarty said he still watches the fight once a year, admitting he can still “feel the anger” from that moment.

24/7 Wall St.
Greatest Teams in the History of Every Sport 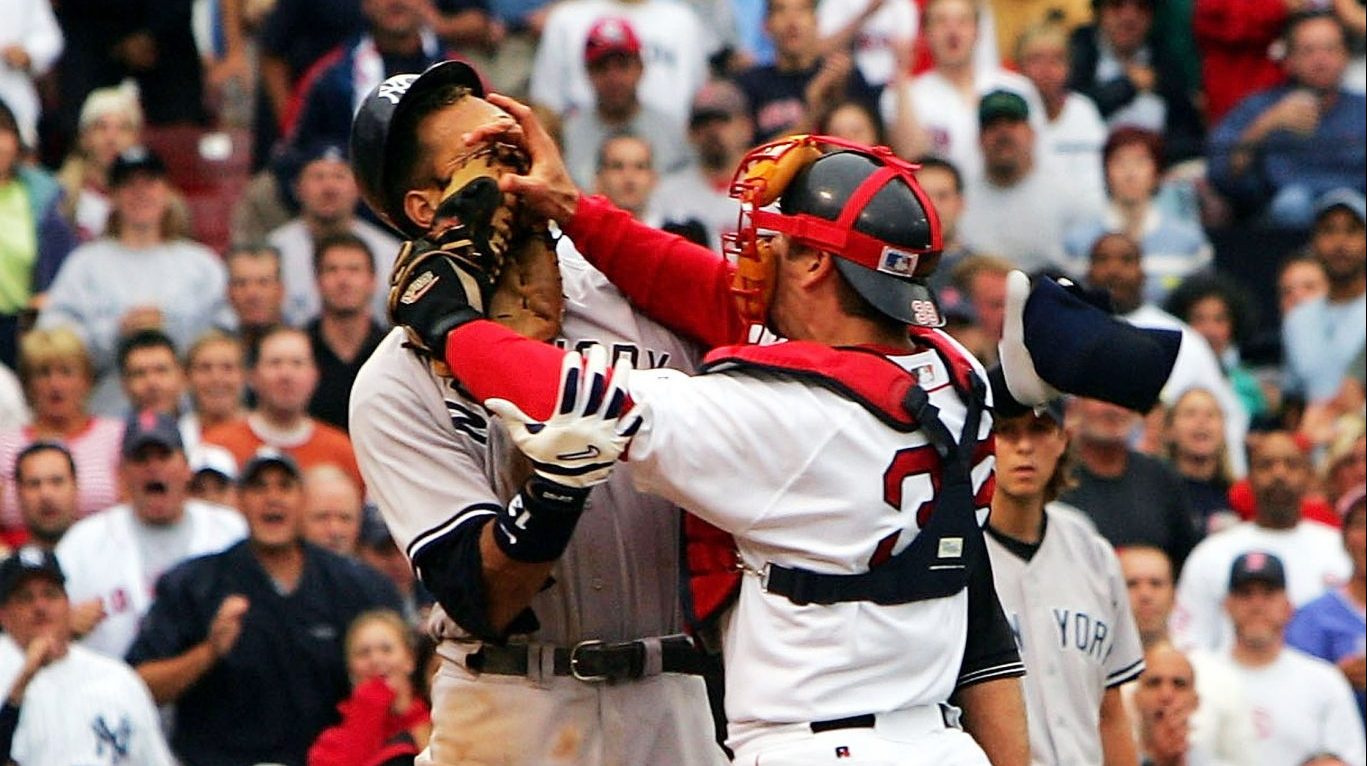 In the summer of 2004, the Boston Red Sox were mired in an 86 year-long World Series drought, and the New York Yankees seemed like the team to beat. Though the two were rivals, there was no disputing that the Yankees were the better franchise. The Red Sox, led by catcher Jason Varitek, wanted to show the Yankees they still had some fight by going after their new superstar player, Alex Rodriguez. Red Sox pitcher Bronson Arroyo drilled A-Rod with a fastball, to which A-Rod responded by yelling some choice words back at Arroyo as he walked up the first base line.

Though this has never been confirmed, there are reports that during the shouting match Varitek told Rodriguez, “we don’t throw at .260 hitters,” ribbing A-Rod for his disappointing batting average that season. Whatever actually was said, Varitek and Rodriguez scuffled soon after and benches cleared. The fight has been credited by some Red Sox players as the catalyst for their incredible ALCS comeback against the same Yankees later that season, earning Boston their first World Series in decades. Varitek and Rodriguez were still icy towards one another years later. When they played for Team USA in the 2006 World Baseball Classic, the two reportedly refused to speak to each other. 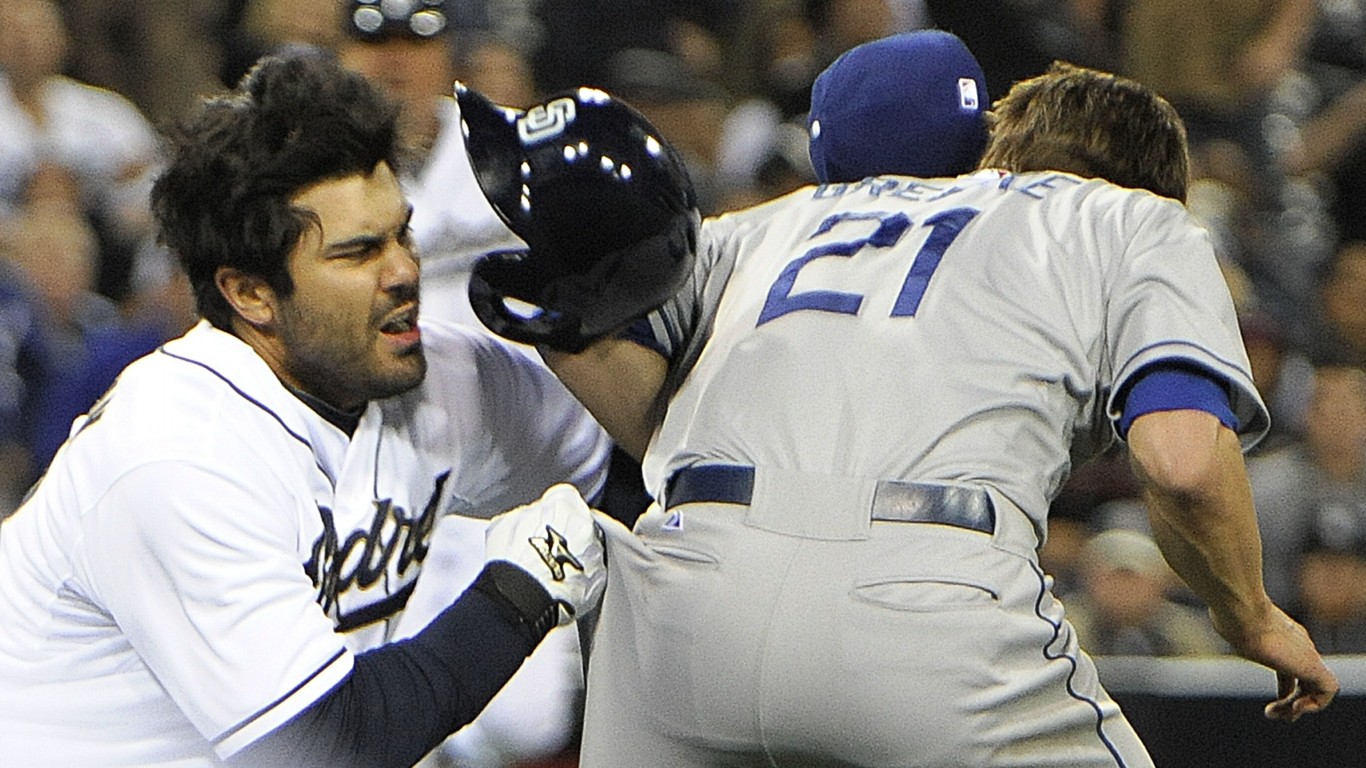 The beef between Zack Greinke and Carlos Quentin had been brewing long before 2013 when the two got into a massive brawl that left Greinke with a broken collarbone and ended his season. In 2008, when Quentin played for the Chicago White Sox and Greinke with the Kansas City Royals, Quentin was plunked by Greinke. He got his revenge the next at-bat by hitting a home run. When they faced off the next year, Greinke got Quentin again, this time with a pitch square in the back. Quentin noted the two had a history, while Greinke tried to shrug off the incidents, saying he wasn’t hitting Quentin on purpose.

Whatever the case, Quentin had enough. The two faced off again in 2013 — this time with Quentin a San Diego Padre and Greinke a Los Angeles Dodger. Quentin took a pitch to the shoulder, so he charged at Greinke. Instead of either throwing a punch, they rammed into one another with their shoulders. Greinke took the worst of the hit, breaking his collarbone, and ending his season. The Dodgers were furious, with some even confronting Quentin in the locker room hallway after the game. The injury to their starting pitcher may have spoiled Los Angeles’ playoff run that season — they lost in the NLCS. 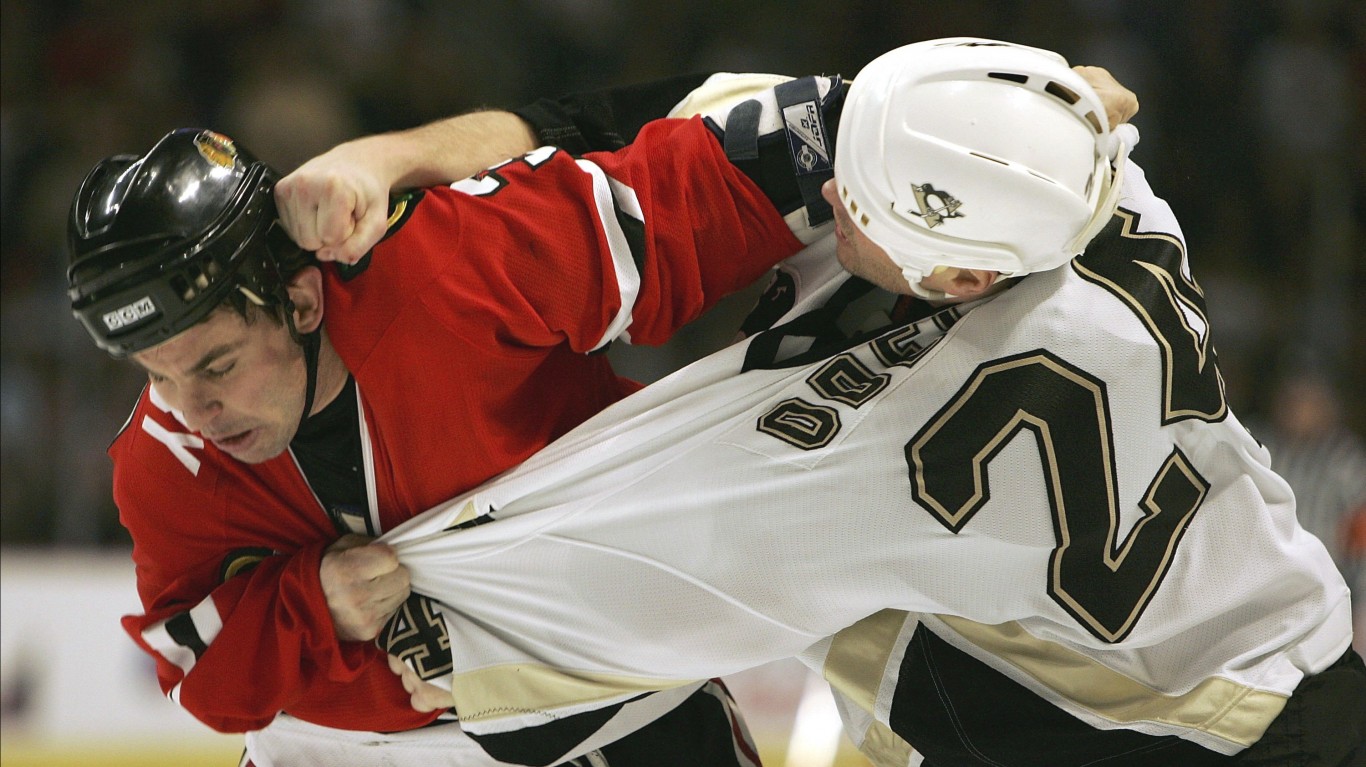 Many hockey feuds stay primarily on the ice, but some cross over into the media, with players rushing to reporters to get in as many verbal jabs as possible. This was the case in the beef between journeymen NHL players Lyle Odelein and Matthew Barnaby. The two had, by their count, fought close to 10 times before their 1999 playoff matchup as members of the New Jersey Devils and Pittsburgh Penguins, respectively. So a healthy dislike had developed.

Things escalated when Barnaby told reporters his teammates called Odelein “Cornelius,” an unflattering comparison to a character from the “Planet of the Apes” films. Odelein responded by saying Barnaby’s wife was “god-awful to look at.” The two continued fighting on and off the ice throughout their careers, with Barnaby telling hockeyfights.com, “I do hate the guy,” in 2004. Odelein retired in 2006, but not before getting into one last scrap with his nemesis.