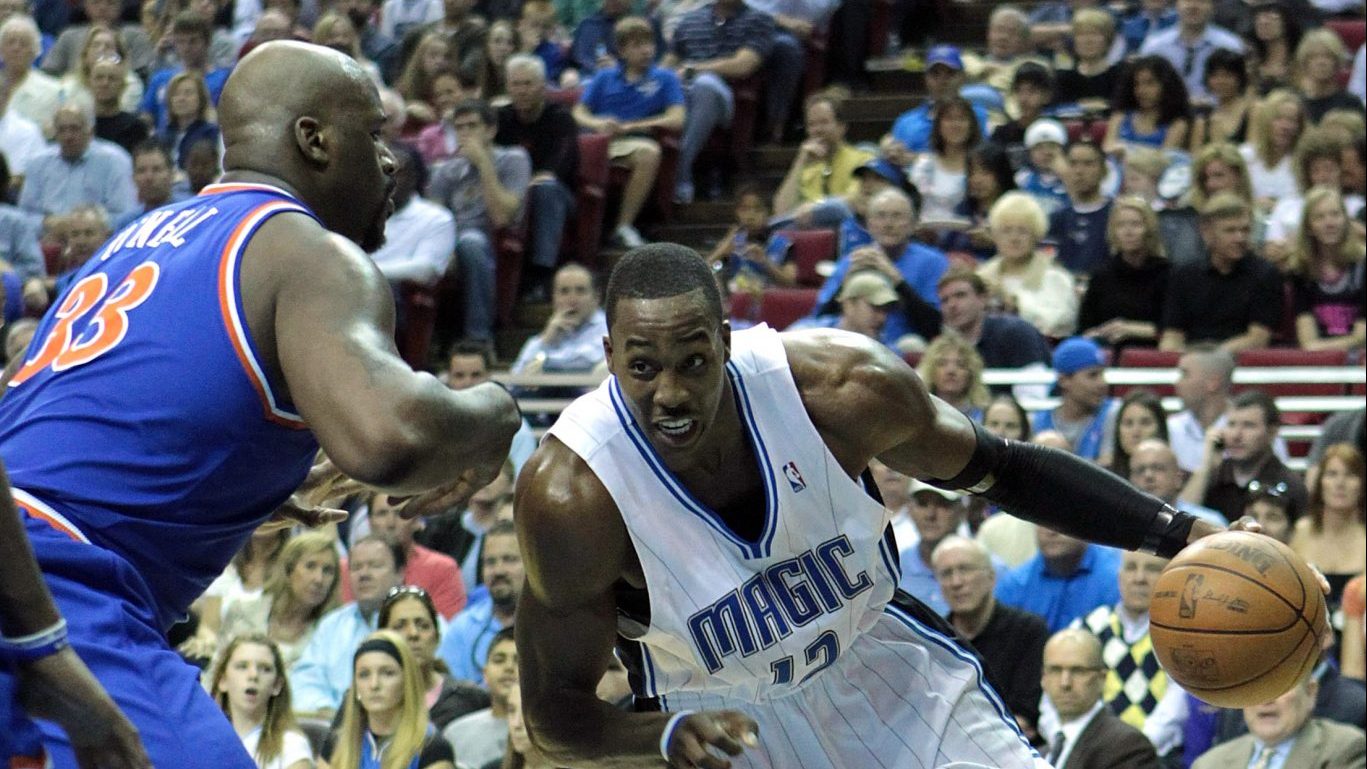 Comparisons between Dwight Howard and Shaquille O’Neal were inevitable — both are strong, physically dominant centers who started their careers with the Orlando Magic. Their feud seemed to begin in 2008, when Shaq bashed Howard for dressing up as Superman for the NBA Slam Dunk Contest — a superhero motif O’Neal had coopted for his own use throughout his career. O’Neal did not appear to appreciate the imitation, writing on social media “There can only be 1 Superman #ME.”

The two players had some physical battles when they were in the NBA, but the beef has continued beyond Shaq’s career. After O’Neal retired, he joined TNT’s “Inside the NBA” and used his national media platform to repeatedly take shots at Howard’s play and taunt him for never winning a championship. Howard has often responded with mocking imitations of Shaq. The feud went to another level in 2017, when Shaq released a diss track about Howard. Even in 2019, O’Neal is still taking shots at Howard. Over a decade since it began, the beef is showing no signs of slowing down. 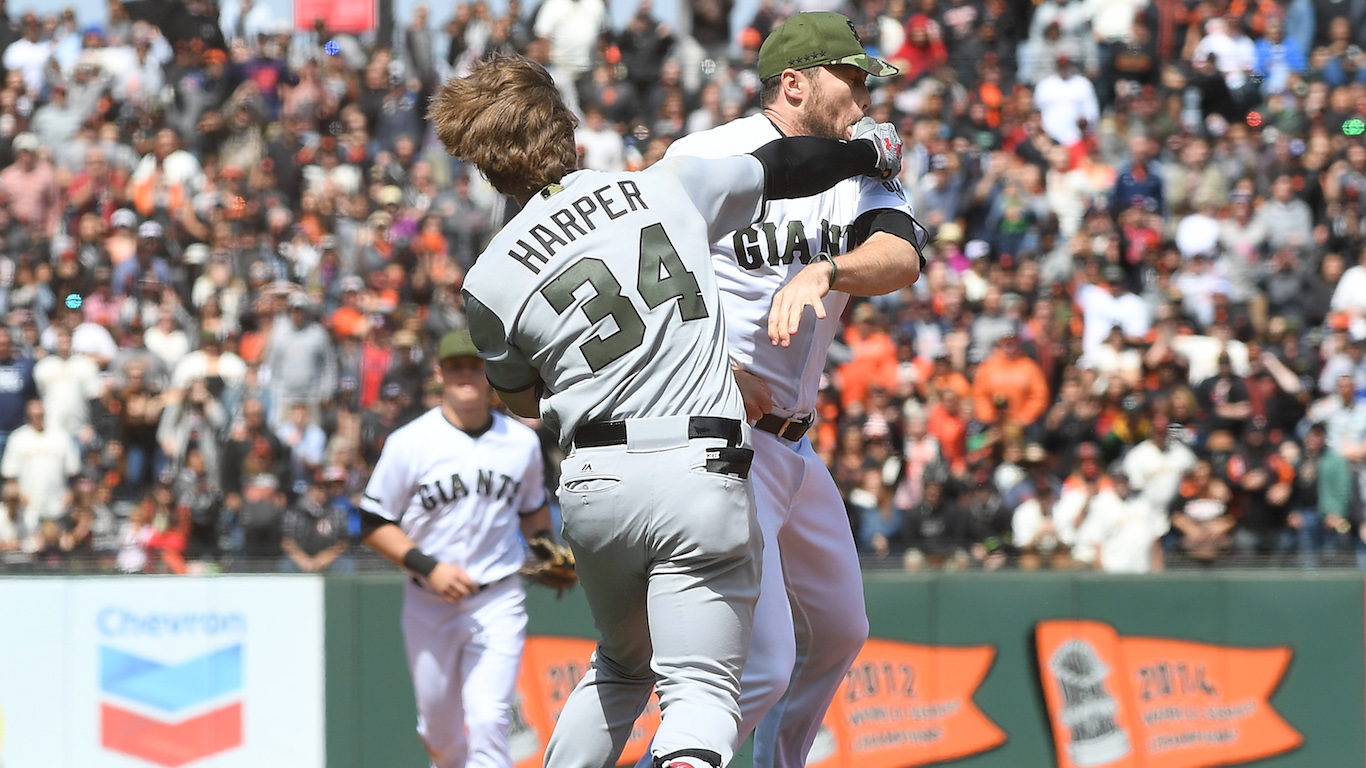 The feud between one-time NL MVP Bryce Harper and reliever Hunter Strickland began in 2014, when Harper, then a Washington National, homered off Strickland, then a San Francisco Giants, in Game 1 of the NLDS. Harper admired his home run and glared at Strickland as he rounded the bases. Harper got him again in Game 4 of the series, but the Giants won the series on their way to a championship.

In 2016, Harper and Strickland exchanged barbs in the media about baseball’s “unwritten rules” about whether it is ok to admire a home run or not. Harper said the old school code of etiquette was “tired,” but Strickland said there was a history of the game that needs to be respected. In 2017, Strickland looked to enforce the rules by drilling Harper with a 98 mph pitch. Harper took exception and charged the mound, leading to a massive brawl between the Nats and Giants. Harper left Washington in free agency for the rival Philadelphia Phillies. Strickland signed with the Seattle Mariners before he was traded to the Nationals in 2019, winning a World Series with Harper’s old team. This beef may be far from over as Strickland and Harper will likely face each other frequently, playing for NL East rivals.

24/7 Wall St.
Athletes Who Played for Their Biggest Rival 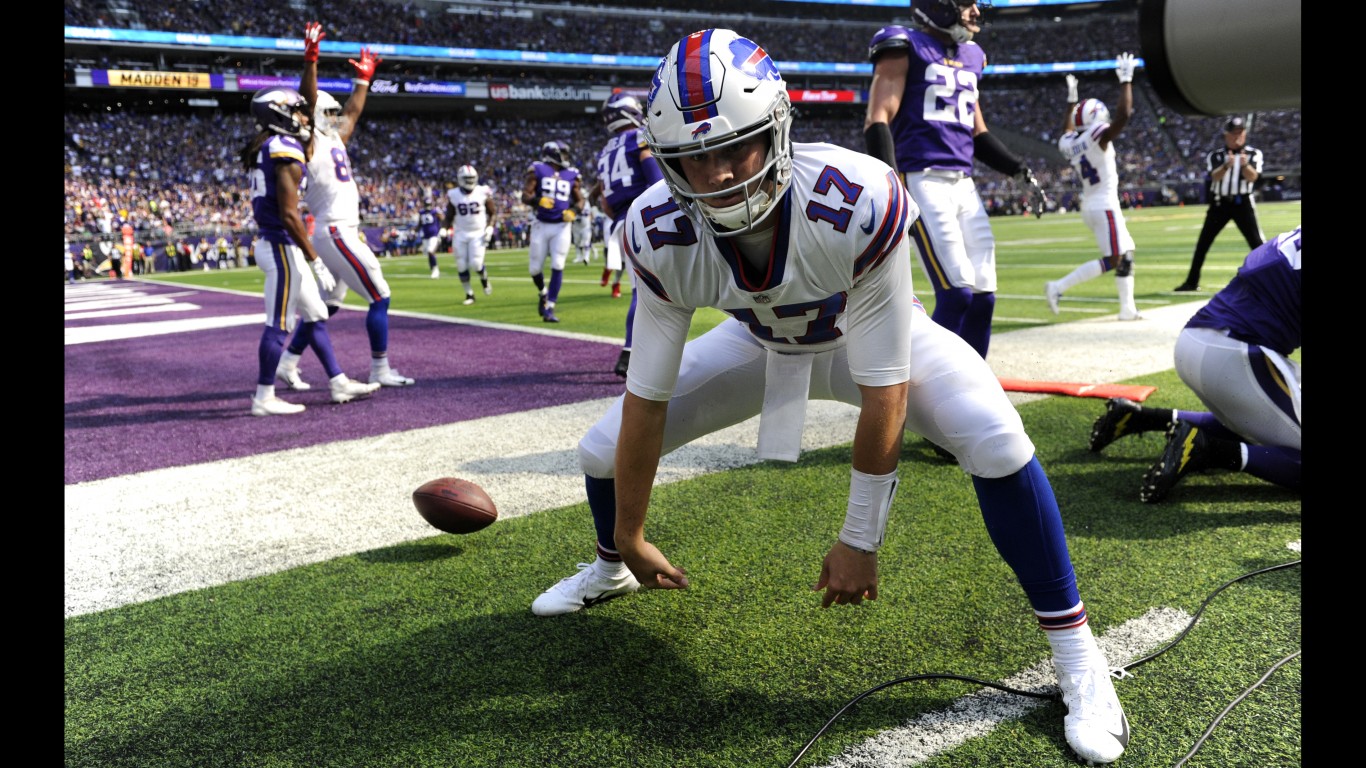 Jalen Ramsey has earned bragging rights as one of the NFL’s top cornerbacks, making three Pro Bowls in his first four years. He’s also made a name for himself as a trash talker, largely due to a 2018 GQ profile. He ripped a number of NFL QBs, but no one received his ire quite like Buffalo Bills’ Josh Allen, who the team had just drafted. He called Allen “trash” and a “stupid draft pick,” poking fun at him for going to a smaller school in Wyoming and predicting he would turn the ball over a lot as a pro. Ramsey even went to the Bills’ Twitter account to find a video of an Allen pass and called it “a pick waiting to happen.”

Allen seemed to shrug off the comments when asked about them, but he was able to get his own digs at Ramsey on the field. The Bills and Jaguars played each other in 2018, a game that resulted in a 24-21 win for Buffalo. After a Bills touchdown, Allen appeared to have some choice words for Ramsey when he ran to celebrate with his team. Allen confirmed he “might have said” a few things to Ramsey after the play. The feud continued into 2019, when an image surfaced of an autographed photo of Allen, which the Bills QB captioned “Hey Ramseyâ¦ am I still trash?” Ramsey confirmed on Twitter that this was still the case. 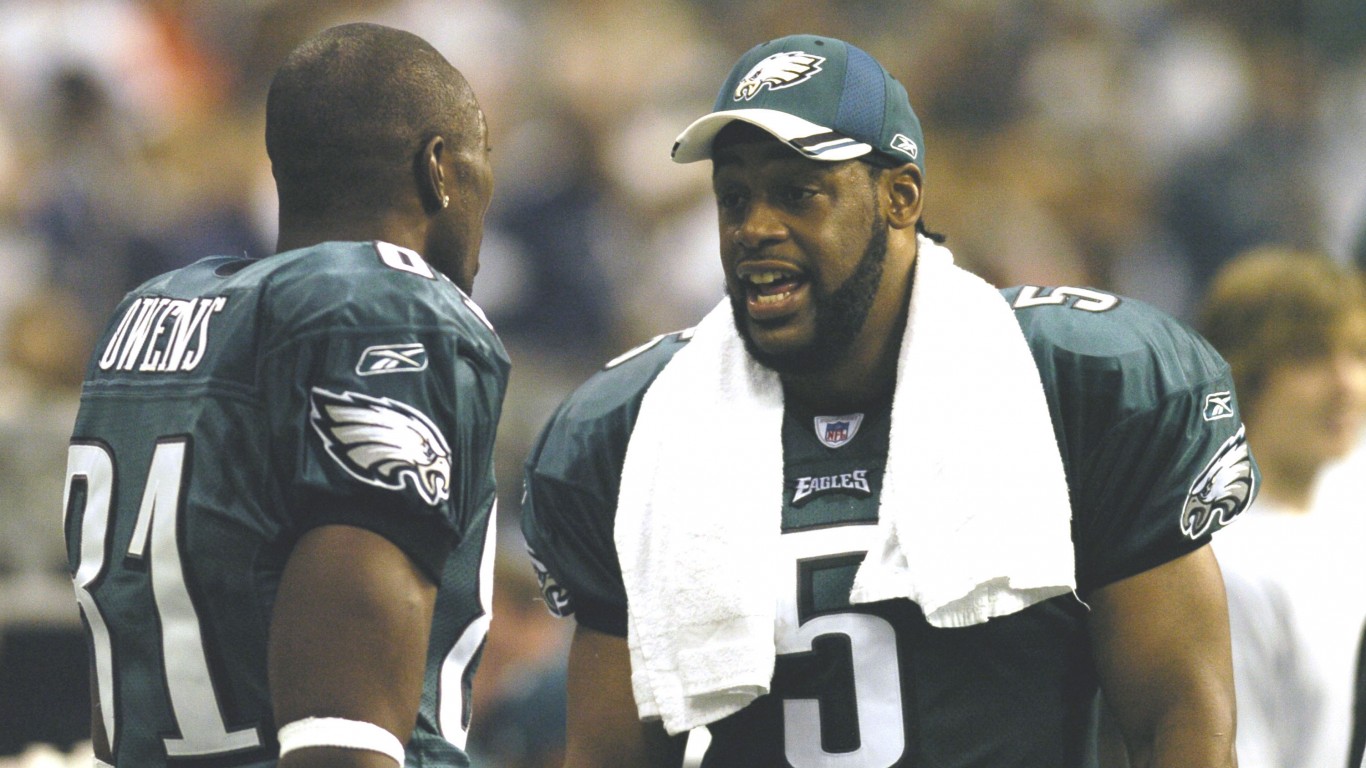 Donovan McNabb and Terrell Owens had a lot of success together as a quarterback-wide receiver tandem — when they could get along. In 2004, their first year together, Owens was an All-Pro wideout, with 1,200 receiving yards. But the relationship soon deteriorated. Owens battled back from a broken leg to play in the Super Bowl, which the Eagles lost. He then blasted McNabb for his performance in the game, though the QB was reportedly ill during the game.

The next season, Owens said the Eagles would be better off if their quarterback was Brett Favre and not McNabb. McNabb called the comments “a slap in the face.” The Eagles suspended Owens for the final nine games of the 2005 season before trading him to rivals Dallas Cowboys for those comments. After both players had retired, the beef continued. In an interview in 2017, Owens said the friction began when he asked McNabb why he didn’t pass Owens the ball when he was wide open. Owens said McNabb shut him down with an expletive. 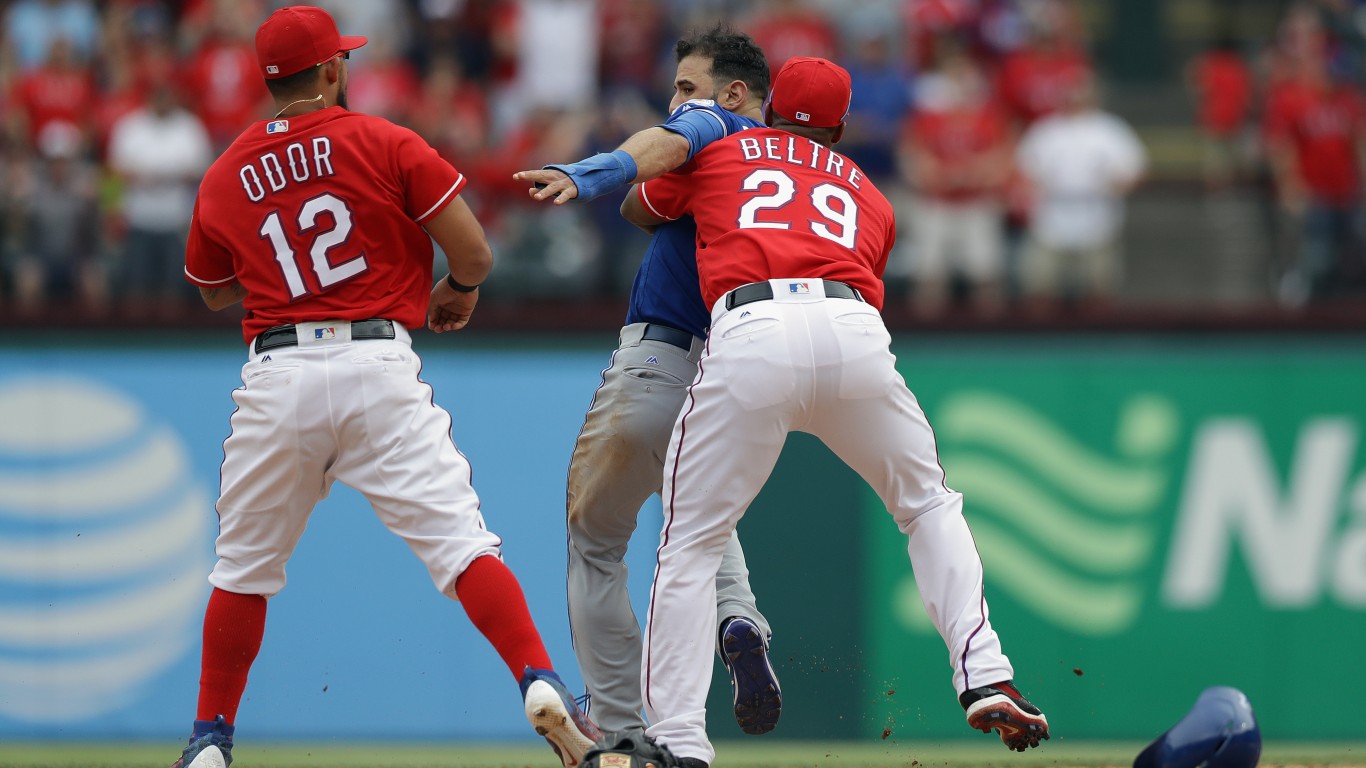 The beef between Rougned Odor and Jose Bautista started and ended with big hits. Bautista, a Toronto Blue Jays outfielder at the time, hit a mammoth seventh inning home run when the teams faced off in the 2015 playoffs, taking the game from a 3-3 tie to a 6-3 Toronto lead. Odor and the Rangers were upset Bautista flipped his bat and celebrated the huge home run.

Resentment still simmered between the teams a year later. Rangers pitcher Matt Bush plunked Bautista with a pitch when the teams met during the regular season. Shortly after, Bautista angered Odor when he slid well past the bag when trying to break up a double play — a maneuver outlawed by the MLB because it can injure the fielder who plants his foot to throw to first. Odor took exception, shoving Bautista in the chest, then punching him squarely in the jaw. Both benches cleared and 14 players and coaches were disciplined for the fracas.