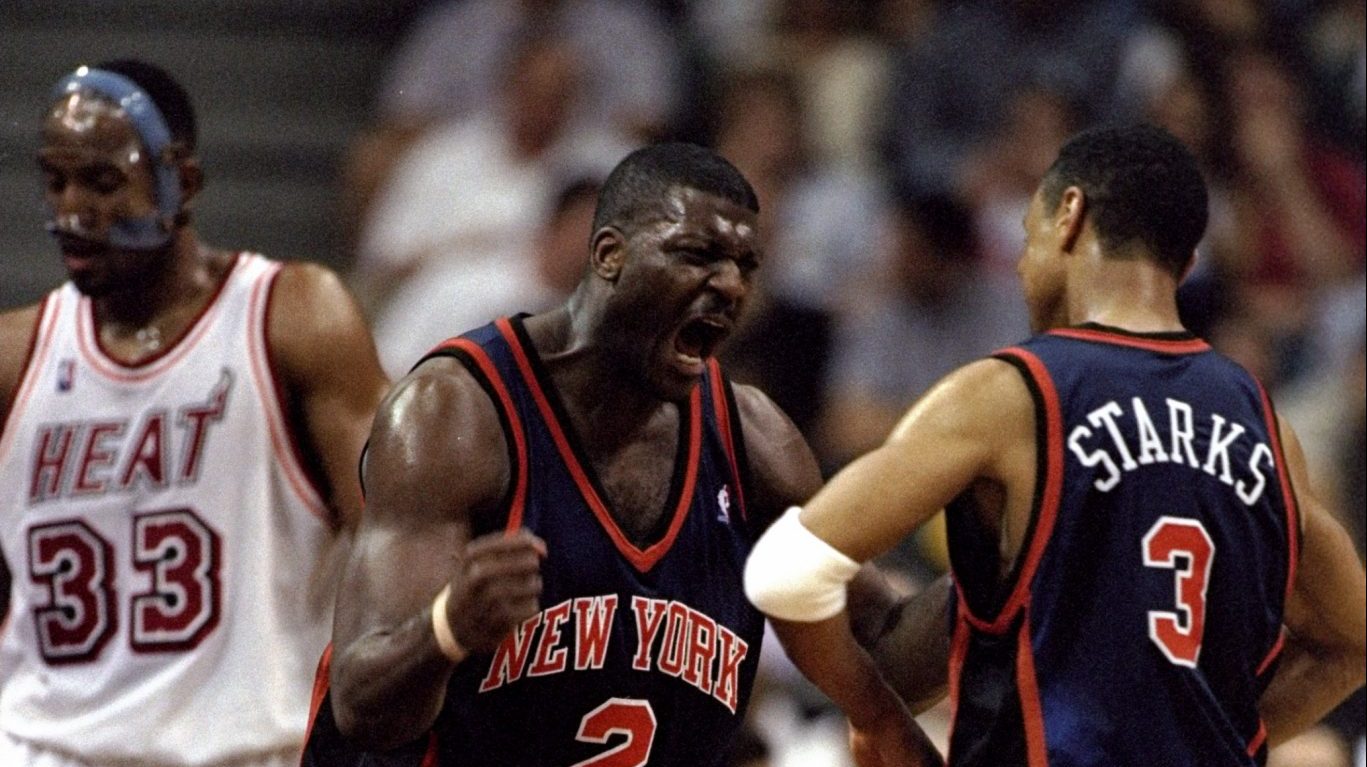 The beef between Larry Johnson and Alonzo Mourning began when they were both members of the Charlotte Hornets. The pair were a formidable duo, but when Johnson signed a massive $84 million contract in 1993, Mourning became envious and publicly complained about the deal as he became a bigger part of the Hornets offense than Mourning was. The two went their separate ways — Johnson to the Knicks and Mourning to the Heat — and that’s when their disagreements would really reach a boiling point.

The late 1990s Knicks and Heat were huge rivals — facing off in the playoffs four straight times from 1997 to 2000. These series were characterized by testy, physical play. Things finally culminated in 1998, when Johnson and Mourning, after playing tough against one another, began throwing haymakers at the end of a playoff game. None of the punches landed, but both teams faced huge suspensions that marred the series. After they retired, the two were able to patch things up. 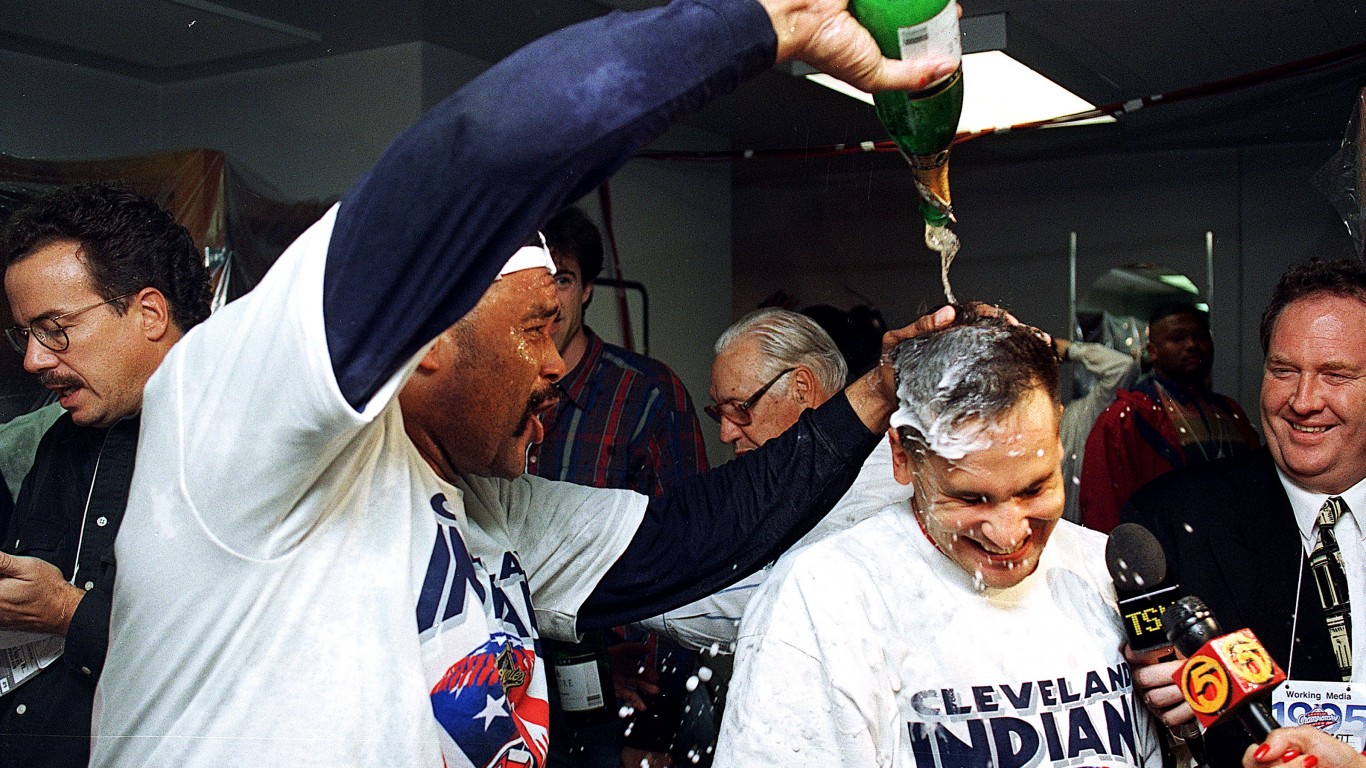 Omar Vizquel and Jose Mesa were once friends and teammates, but one game turned the friendship into a yearslong beef. As members of the 1997 Cleveland Indians, the pair nearly won the World Series. Mesa was called on to close out game 7, which the Indians led 2-1 going into the 9th. After two singles and a sacrifice fly, the Florida Marlins tied it up, winning it all in the 11th inning.

Vizquel blasted Mesa’s performance in his autobiography six years later, saying Mesa’s “eyes were vacant. Completely empty.” This clearly stung Mesa, who vowed to bean Vizquel every time the two faced off, saying, “If I face him 10 more times, I’ll hit him 10 times. I want to kill him.” Mesa kept his word, drilling Vizquel in the back. The feud continued for years. In 2006, Mesa was with the Colorado Rockies and hit Vizquel, of the San Francisco Giants, with a fastball, sparking a huge series of beanballs and ejections. Mesa eventually stopped plunking Vizquel, but there is still no word that the two ever made up. 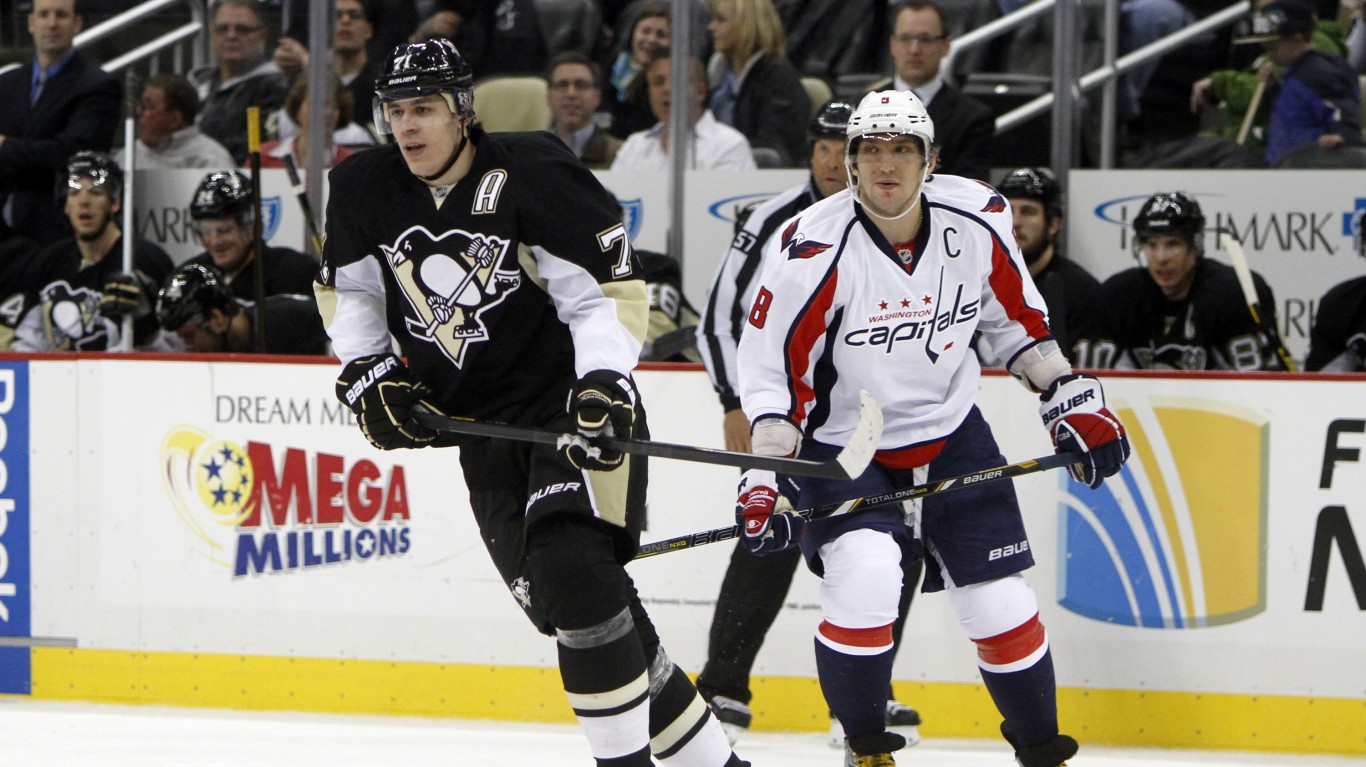 As arguably the best two NHL players of their generation, Alex Ovechkin is often compared to Sidney Crosby. His biggest personal rival, however, may actually be fellow Russian player and Crosby’s Pittsburgh Penguins teammate, Evgeni Malkin. The two started as friends and Russian National Team teammates, but something soured the relationship. Malkin told reporters Ovechkin punched Malkin’s agent at a Moscow nightclub. The players refused to say exactly what went down and why, simply saying it was the result of a “bad situation.”

The bad blood spilled over onto the ice, as Ovechkin appeared to go out of his way several times to hit Malkin throughout 2008, including a near-miss blindside hit that could have ended badly. Malkin’s Penguins continually got the better of Ovechkin’s Capitals for nearly a decade — bouncing Washington out of the playoffs in 2009, 2016, and 2017 on their way to three Stanley Cups. The feud seems to have cooled over the years. Malkin said in 2017 he wanted Ovechkin to win a championship eventually, which happened the next year, when Ovechkin finally got his Cup in 2018. 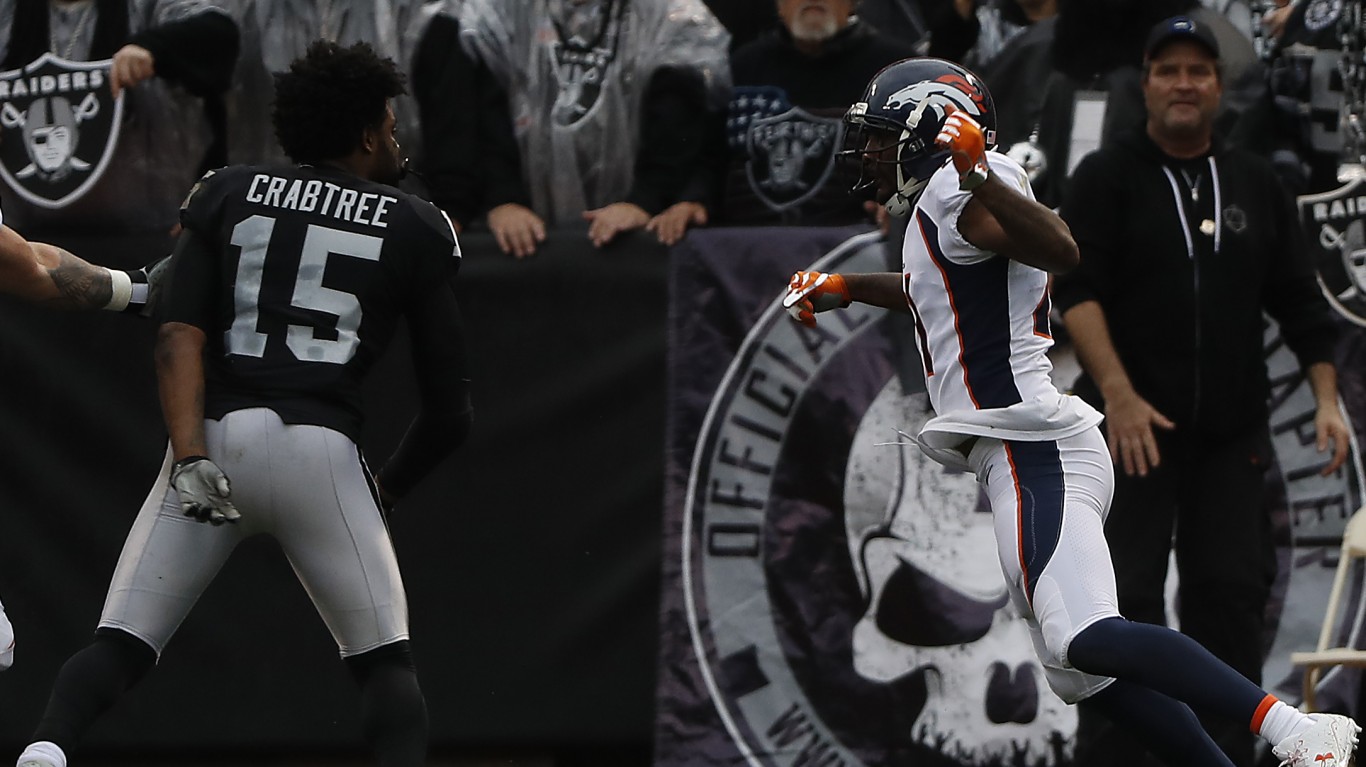 Wide receivers and cornerbacks are natural enemies as they face off play after play for the entire game. Few confrontations have gotten as heated as the one between Denver Broncos corner Aqib Talib and Oakland Raiders receiver Michael Crabtree. The feud seems to have ignited in early 2017, when the old AFC West foes faced off. Talib took issue with a gold chain Crabtree had been wearing during the season, so he ripped it right off Crabtree’s neck. TV cameras caught Talib laughing about the incident on the sideline. Afterwards, Crabtree said Talib was a fake tough guy, telling the media, “I really don’t like No. 21, though. I think he’s fake.”

When the two teams met the next season, Talib tried to snatch the chain again, but Crabtree taped it to his chest to try to secure it. That strategy didn’t work, as Talib broke the chain. Crabtree took Talib down to the ground, and the scuffle escalated into a full-blown fistfight. Both players were ejected and suspended one game. This story has a happy ending as the two have reportedly made up after running into one another at a Texas go-kart track and decided to make amends. 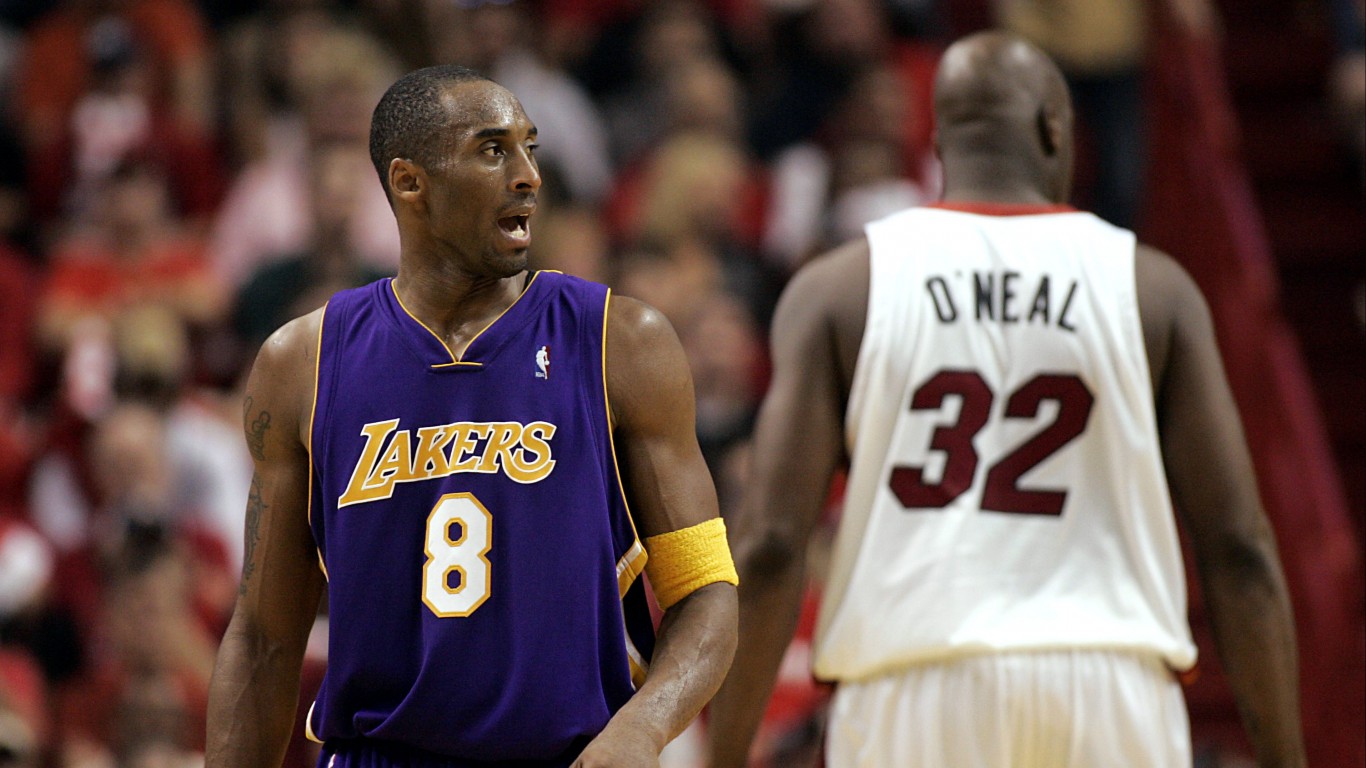 The feud between Shaq and Kobe has given the sports world one of its greatest “what ifs” of all time. How great could the tandem have been if they could have continued playing together? The two were dominant as Los Angeles Lakers teammates, winning three straight titles from 2000 to 2002, but there were behind the scenes issues. Kobe accused Shaq of being out of shape, while O’Neal contended Bryant was a ball hog. O’Neal even rapped that they couldn’t even be in the same room together because of their beef.

Reportedly, the final straw came when Bryant, while under investigation for sexual assault in Colorado, told police that the married O’Neal would pay women hush money. O’Neal denied the allegations, saying, “I never hung around him,” and adding, “I’m not the one buying love. He’s the one buying love.” O’Neal demanded a trade and got his wish when the Lakers shipped him to the Miami Heat. O’Neal played well in Miami, winning the 2006 title with the Heat and periodically taunting Kobe. But Bryant may have had the last laugh with back-to-back titles in 2009 and 2010. After O’Neal’s retirement, the two seemed to have patched things up, with Bryant saying in 2013 the two had a “good relationship.”