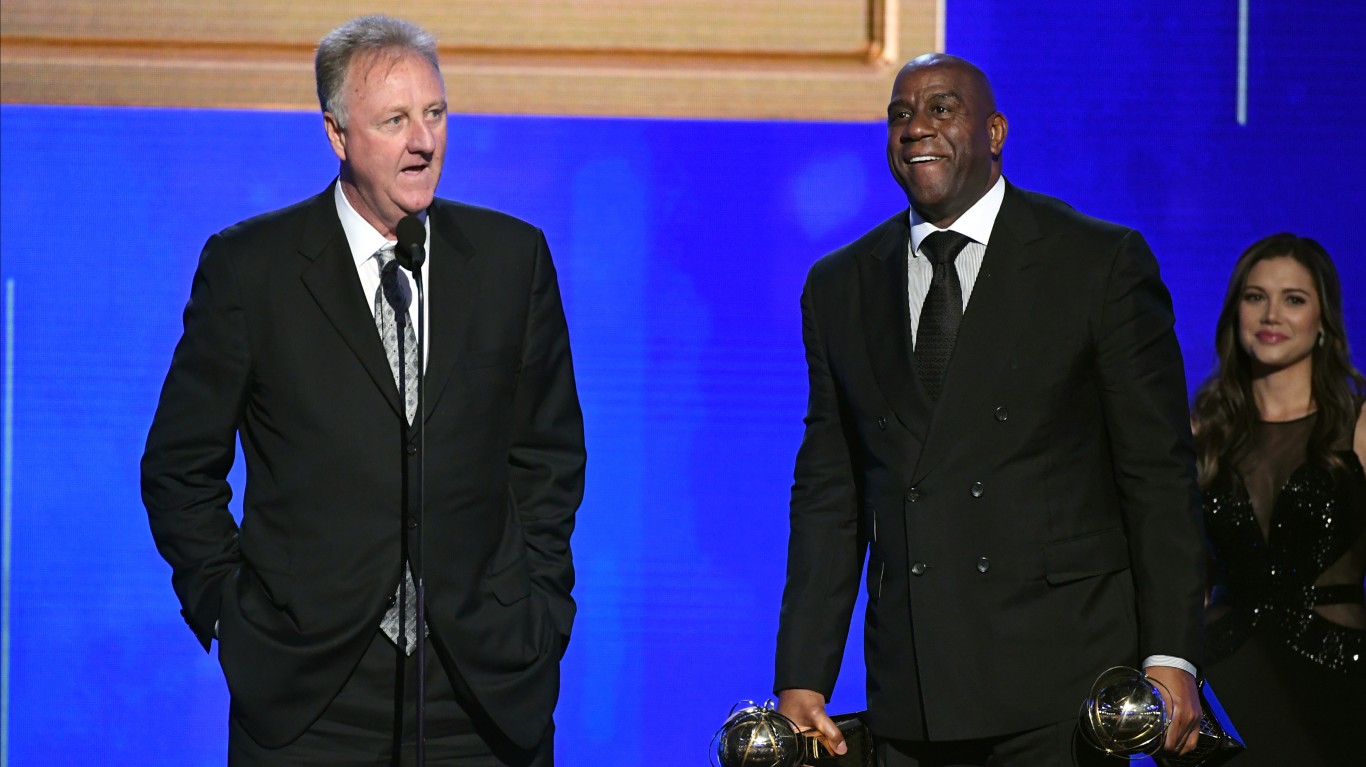 The Bird vs. Magic beef is different than just about every other sporting squabble, as these two basketball legends faced off at a championship level for over a decade. The two, though complete opposites in style and demeanor, always seemed to have great respect for one another. They first played in 1979, when Bird’s Indiana State team surprised the basketball world by making it to the NCAA Championship game, where they faced off against Johnson’s Michigan State Spartans. Michigan State ended up winning the matchup, which still ranks as the highest-rated college basketball game of all time in terms of viewers.

As fate would have it, the two happened to be drafted by the biggest rivals in the NBA — Bird by the Boston Celtics and Johnson by the Los Angeles Lakers. There, they tried to outduel one another. Bird even admitted that his morning routine began with checking in the paper to “look at the box scores to see what Magic did.” They met in the 1984, 1985, and 1987 NBA Finals, with the Lakers winning two of those matchups. When all was said and done, both Bird and Johnson ended their Hall of Fame careers with three MVPs, multiple championships, and a legendary rivalry that helped make the NBA what it is today. 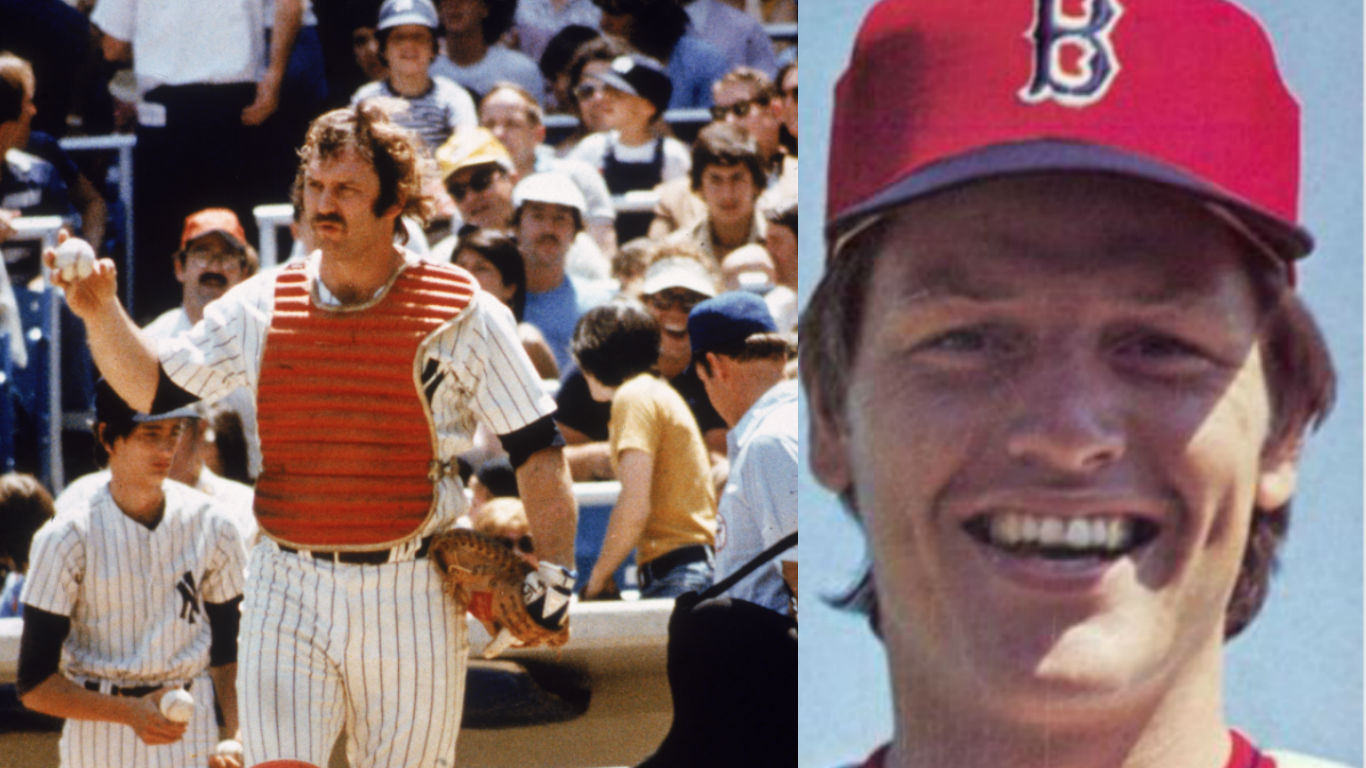 Few players have epitomized the intense Yankees vs. Red Sox rivalry like catchers Thurmon Munson and Carlton Fisk. Both vied for the title of best catcher in the game throughout the 1970s. The Yankees’ Munson often felt overshadowed by Boston’s Fisk, who had more advertisements and magazine covers. Munson made sure to note when he got his own commercials, writing in his autobiography, “Eat your heart out Fisk,” and gleefully pointing out that Fisk spent more time injured than he did. An intense dislike developed between the two.

This came to a head in 1973, when Munson decked Fisk during a play at the plate, which led to a huge brawl with Boston and New York players coming out of the dugouts. Both players continued to excel, racking up All-Star appearances throughout the 1970s. Somewhere along the way, the mutual respect Fisk and Munson had for one another overtook the rivalry, and the catchers would even joke with each other during games. Munson died in a plane crash in 1979, and Fisk said he would really miss Munson, saying his career “just isn’t the same without him.” 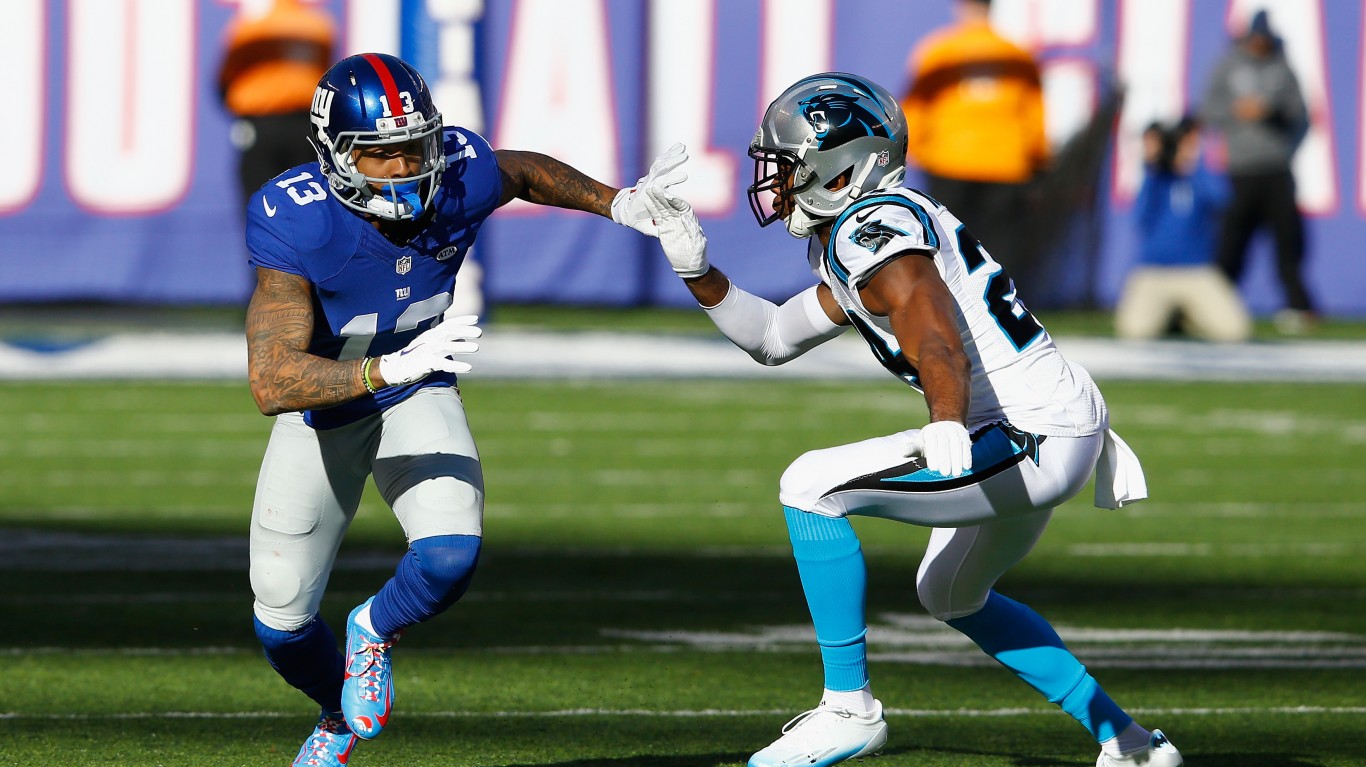 As a late round pick out of Coastal Carolina, cornerback Josh Norman had to fight for his NFL opportunities. Even as an established player, he showed he wasn’t done fighting. He and superstar receiver Odell Beckham Jr. got into a pregame fight in 2015, when Norman was a Carolina Panther and Beckham played for the New York Giants. The two battled all game — sometimes during play, often scrapping after the whistle. Norman and Beckham combined for five personal foul penalties throughout the game.

The pair continued to go at it in the media and on Twitter afterwards. Norman said Beckham has the “maturity of a little kid,” while Beckham responded that the only reason Norman gained any notoriety was because of their feud. Beckham later claimed he tried to patch things up but got no response from Norman, who claimed the beef meant nothing to him. Norman went to the Washington Redskins, but Beckham broke his leg in 2017 and missed both matchups between the two teams. When they met again in 2018, both were able to keep things civil when they faced off. 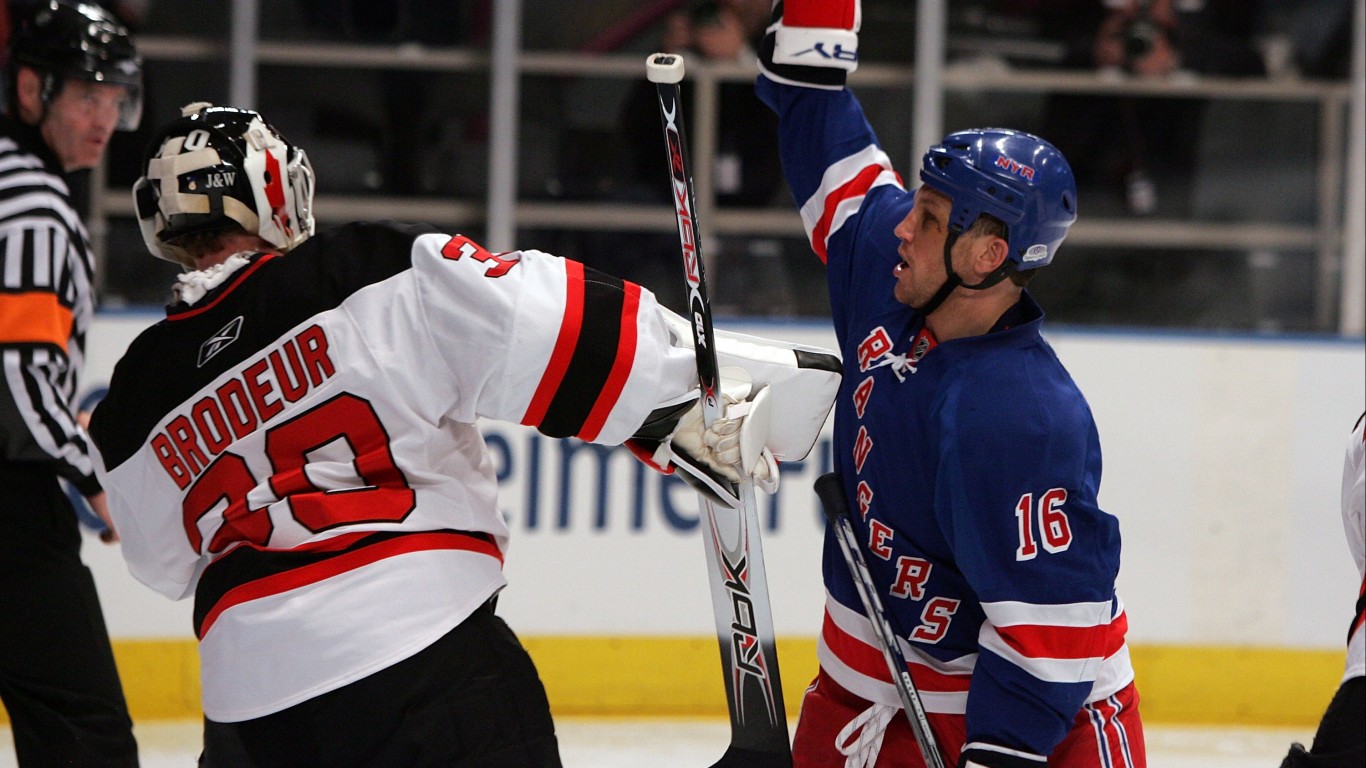 Sean Avery was once rated the most hated man in hockey, constantly fighting and pestering opponents, doing whatever it took to help his team win. He got under the skin of just about everyone he played against, but the person he irked the most was Hall of Fame goaltender Martin Brodeur. The two began their beef when Avery of the New York Rangers collided with Brodeur, of the New Jersey Devils, after a shot attempt. Some pushing and shoving ensued, leading to a brawl. Avery continued to needle Brodeur on the ice and in the press, with Brodeur shooting back each time. Avery would reportedly make fun of Brodeur’s personal life and really got under Brodeur’s skin.

Avery harangued Brodeur so much, the NHL even implemented a rule that made it a penalty for skaters to face goalies and block their vision or try to distract them — a tactic Avery was especially fond of. In 2008, Avery’s Rangers knocked the Devils out of the playoffs. The feud was so intense, Brodeur refused to shake hands with Avery. When asked about it, Avery responded, “Fatso there just forgot to shake my hand I guess.” Even after both retired, Avery was keeping the beef alive on social media. In 2014, Avery appeared on reality show “Dancing with the Stars.” When asked what he thought of the appearance, Brodeur told a reporter: “What more could he do to embarrass himself? There it is!” Avery tweeted that he heard “that #Fatso made a comment” — so it’s safe to say the hatchet has not been buried. 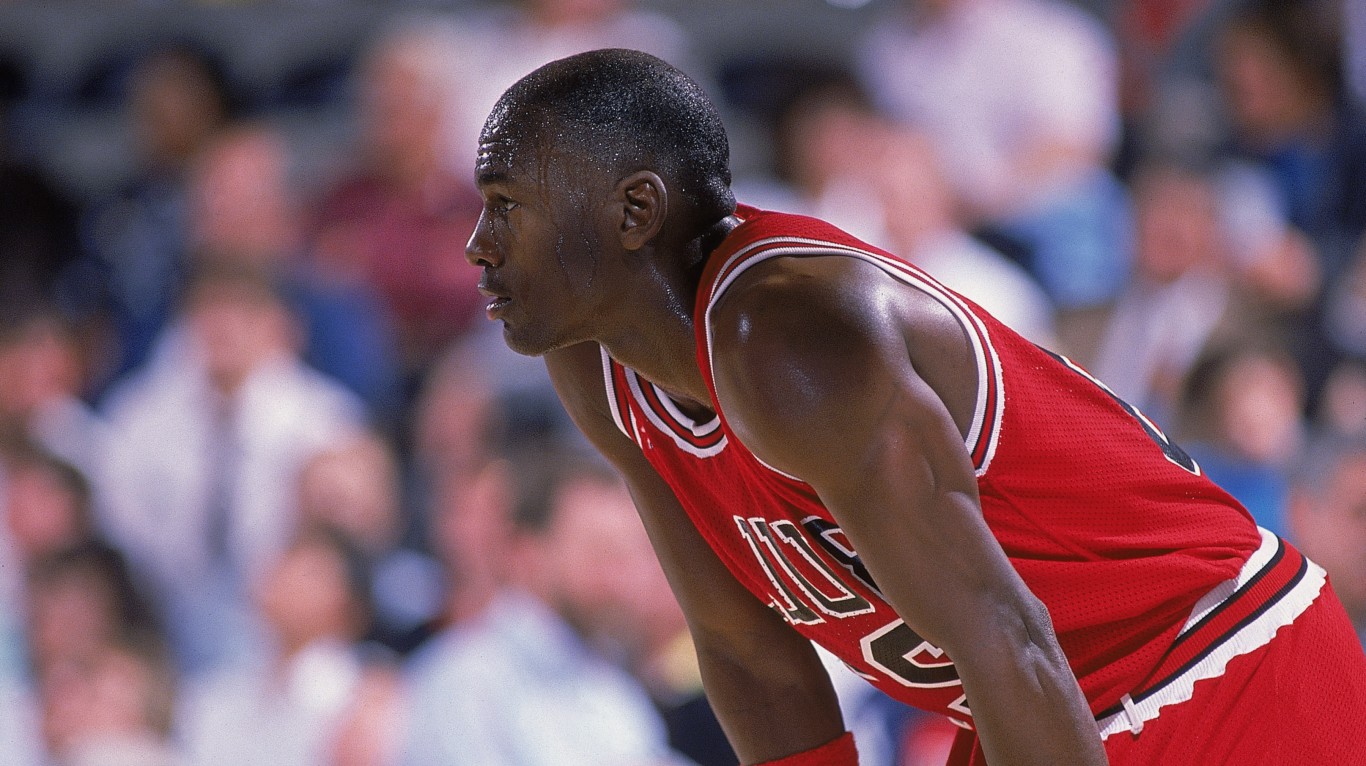 As arguably the greatest basketball player ever, Michael Jordan drew outsized attention from every team he faced. Perhaps no team gave him more attention than the Detroit Pistons. The Pistons, led by Isiah Thomas, hassled and battered the Bulls, knocking Chicago out of the playoffs in 1989 and 1990 on their way to winning back-to-back titles. When the Bulls finally broke through in 1991, Detroit was none too happy, refusing to congratulate Chicago after the Bulls sent them home in the playoffs.

Jordan took notice of the snub and reportedly made sure that Thomas was left off the Dream Team — the legendary Olympic squad USA Basketball sent to the 1992 Olympics. This may have also been retaliation for a fabled “freeze-out” game in which, some fans think, Thomas and other older players conspired to keep a young Jordan out of All-Star game action because they didn’t like the attention Jordan was getting as a rookie. Thomas has denied any such plot. In 2003, Jordan admitted the two could be cordial with one another, though there are still memories of the bitterness.