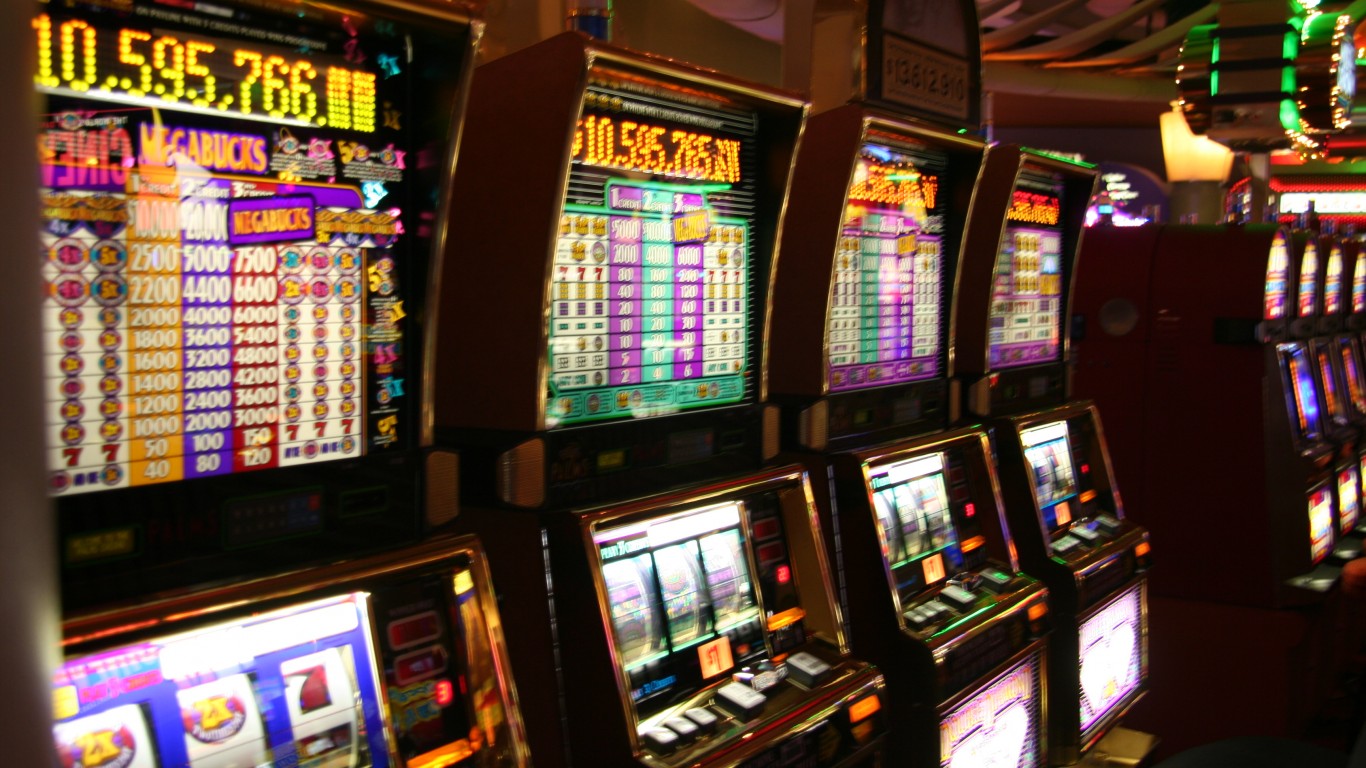 Much of the nation’s $261 billion casino gaming industry has been shuttered because of measures taken to contain the spread of the coronavirus. Casinos in Las Vegas, Atlantic City, and other major gaming destinations have been closed, and staff members have been furloughed or laid off.

Similarly, with every major American sport league canceled for the foreseeable future, the $500 million-per month sports betting industry has essentially dried up. The coronavirus also hit the U.S. just before the beginning of one of the industry’s biggest events — the NCAA Men’s Basketball Tournament. During the 2019 tournament, Americans wagered an estimated $8.5 billion on games. 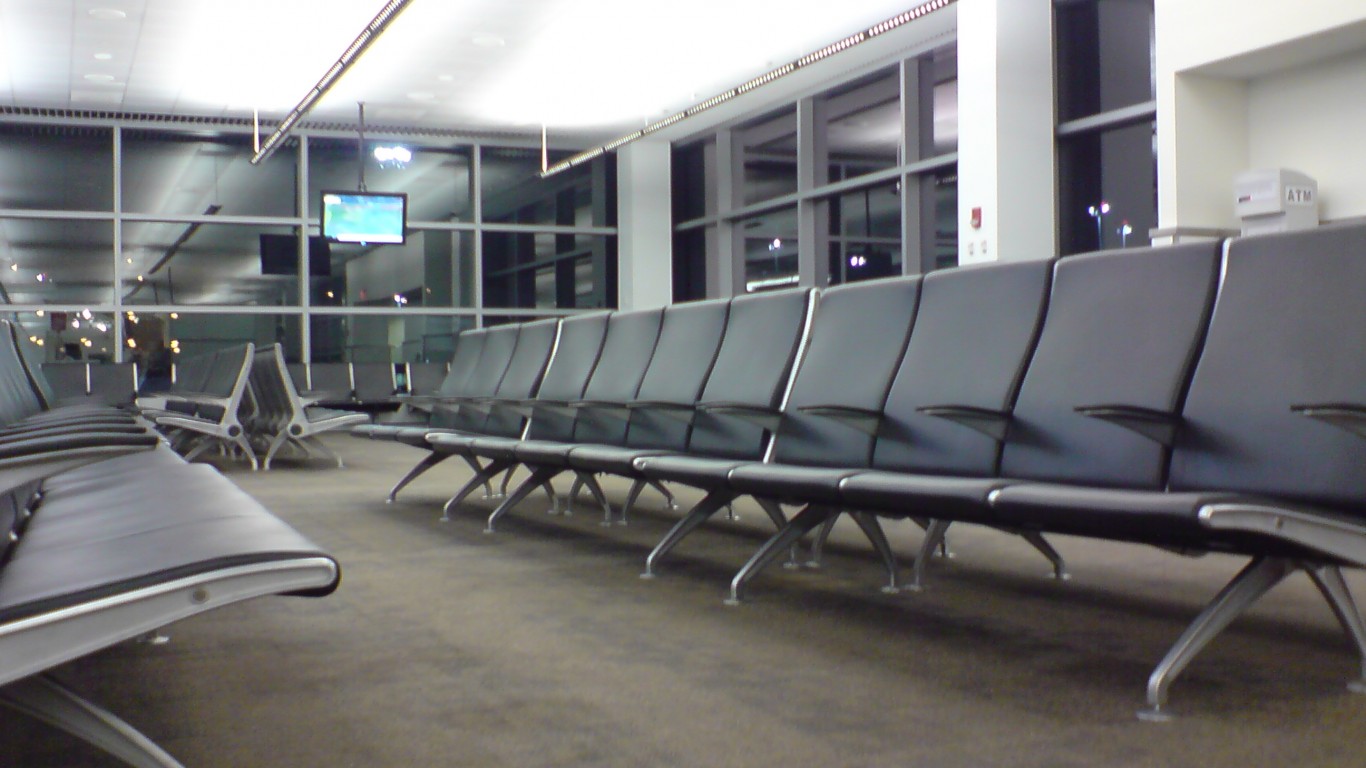 The airline industry is being hit especially hard by the pandemic as demand for domestic and international flights has all but vanished. Major carriers like United, Delta, and American Airlines have all announced plans to cut capacity by more than two-thirds in the coming months.

As of January there were 747,000 people working for U.S. airlines. Their jobs are at risk, though the government is stepping in to help. On April 15, 10 top U.S. airlines agreed to a package that will net them $22.7 billion-worth of wage grants, in addition to a previous $60 billion in grants and loans through a coronavirus relief bill.

24/7 Wall St.
Every State’s Unemployment Claims Since COVID-19 Shut the Economy Down 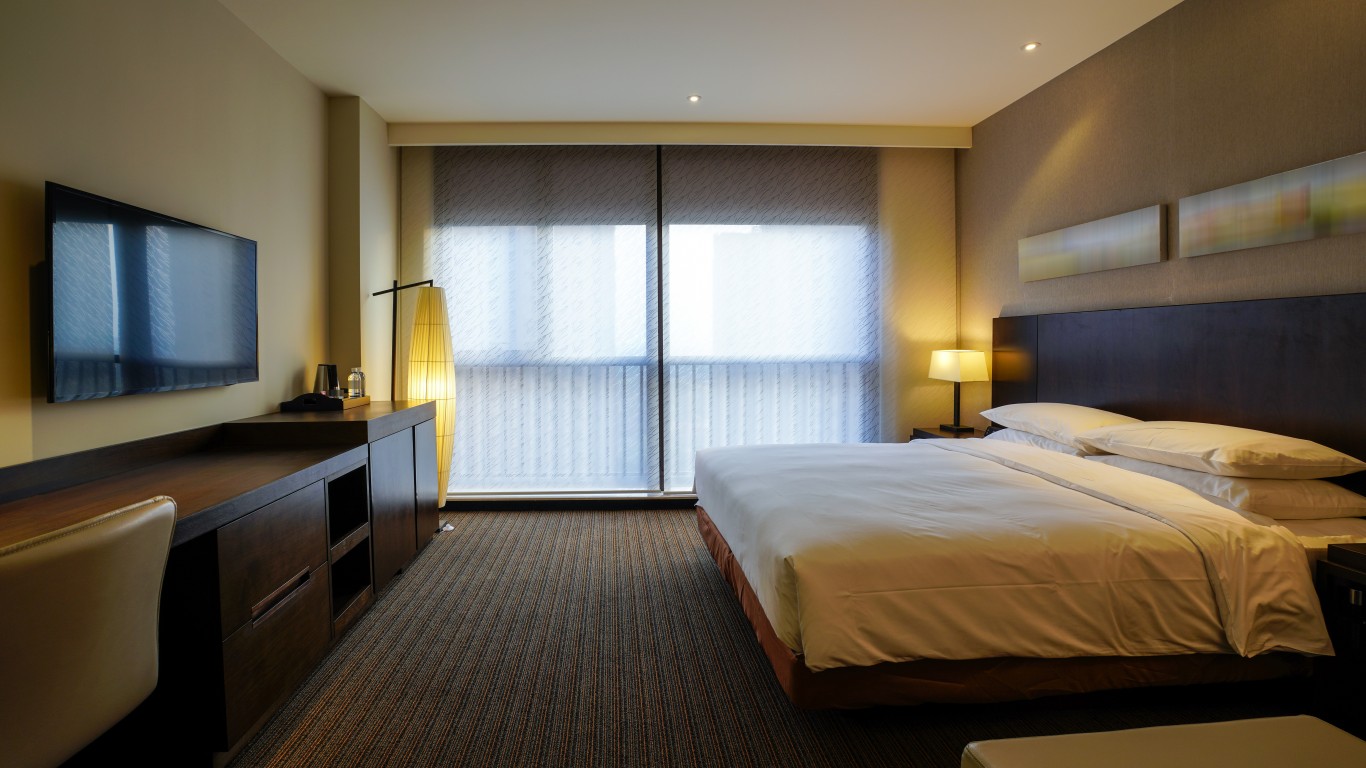 As the pandemic has curbed travel, demand for hotels has declined sharply. The hotel industry is projected to lose just over half of its revenue per room in 2020 compared to the year before, according to hospitality sector data company STR. Since mid-February, hotels have reportedly lost over $13 billion in room revenue.

The U.S. hotel industry employed over 1.6 million Americans before the pandemic — the ninth-largest sector in the U.S. in terms of total workers. An estimated 70% of hotel employees have either been laid off or furloughed, according to the American Hotels and Lodging Association. Concerned the CARES Act will only help hotels meet their payroll obligations for a maximum of eight weeks, hotel owners are lobbying congress for additional aid. 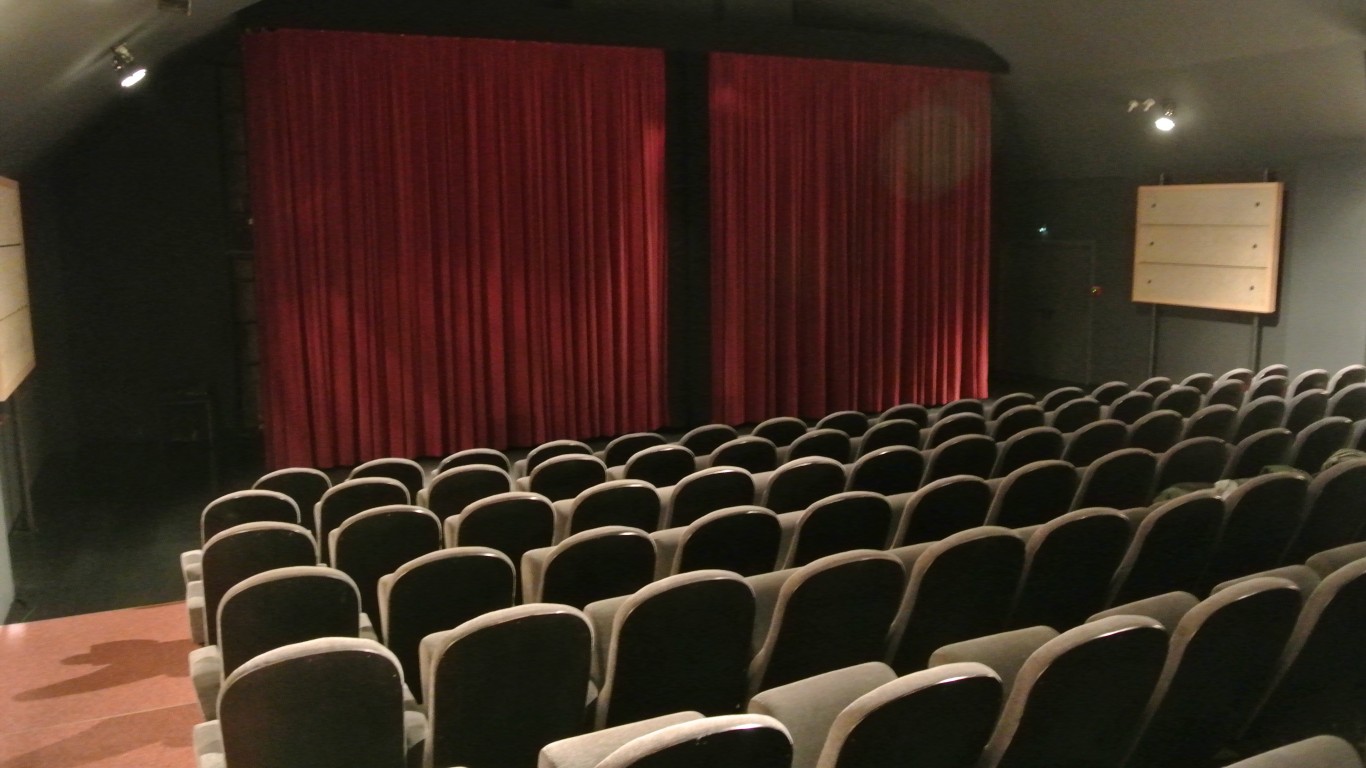 Since social distancing guidelines were announced, movie theaters had to close their doors. Through February, theaters grossed well over $100 million per week, and sometimes even $200 million. By the week of March 13, weekly box office gross fell to $54 million. In the weeks since, theaters grossed just over $17,000 combined. Major theater chains such as AMC and Regal closed all U.S. theaters, leaving thousands of employees without work.

The impact of the pandemic on movie theaters could last even after social distancing guidelines are lifted. While some movies were released straight to video on demand, the releases of blockbusters like “Mulan,” “A Quiet Place Part II,” “Fast 9,” and the latest James Bond film, “No Time to Die,” which were slated for the coming weeks, were pushed back. Dozens of other films, however, had to halt their production, meaning there could be a long period when no new movies are coming out. 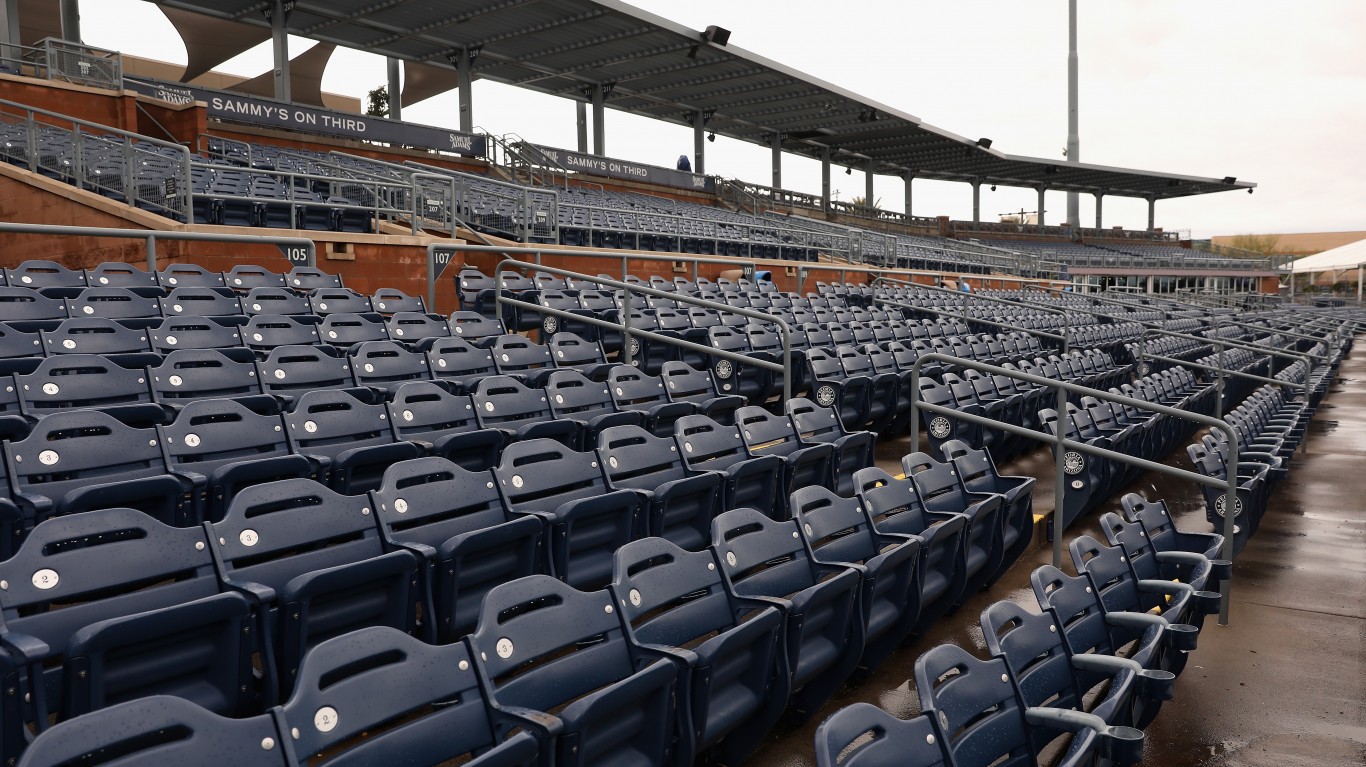 The postponement or suspension of sports leagues like the NBA, NHL, and more has created a huge vacuum for the leagues, players, the estimated 300 staff workers in a given arena, and surrounding businesses that rely on fans for their income. Statistical analysis site FiveThirtyEight estimates that the NBA stands to lose $350 million-$450 million from unsold tickets for the remaining of the regular season, as well as $200 million in non-ticket revenue from sources like parking, concessions, merchandise, and more — and that does not include lost playoff revenues.

The only option for sports to resume in 2020 may be to play without fans. Dr. Anthony Fauci of the National Institute of Allergy and Infectious Diseases said sports will likely not be able to return unless leagues are willing to play in empty stadiums and keep athletes isolated and test them regularly.

The MLB is weighing such a plan that would relocate all games to Arizona, potentially beginning as early as May. The NBA commissioner said a mid-June return to action would be a best-case scenario. The NHL is targeting a similar return date. The XFL, in its first season after reforming, folded.