The Most Dominant Airline in Each State

More than 100 domestic U.S. airlines move hundreds of millions of passengers around the country every year. Most of us know the four or five largest airlines but would be hard-pressed to name the rest.

Between January and October of last year, three U.S. airlines hauled about 100 million or more passengers on domestic flights. The leader was Southwest Airlines (the only U.S. carrier to make 2019’s TripAdvisor list of the world’s 10 best airlines) with 132.25 million passengers, followed by Delta Air Lines with 106.1 million and American Airlines with 99.86 million.

During that period, Southwest flew 20% of all U.S. domestic passengers, compared with 16% for Delta and 15% for American. United Airlines accounted for 11% (71.7 million) and was the only other airline with more than a 10% share. No other airline flew more than 5% of all U.S. travelers.

Airline passenger website Upgraded Points reviewed publicly available data from the U.S. Department of Transportation’s Bureau of Transportation Statistics to determine which state had the largest share of origin flights and which airline carried the most passengers on those flights.

While the country’s most populous state leads the pack (no surprise there), what’s the story on Georgia, North Carolina and Nevada? Georgia is ranked fourth due entirely to its Delta hub in Atlanta. North Carolina is the banking hub of the United States, and everyone knows how much bankers like to travel. Florida, Nevada and Colorado are, to varying degrees, vacation destinations — and these are the top vacation destinations for Americans this summer.

The following graphic indicates the top airline in each state, along with its share of passengers whose flights originate in that state. 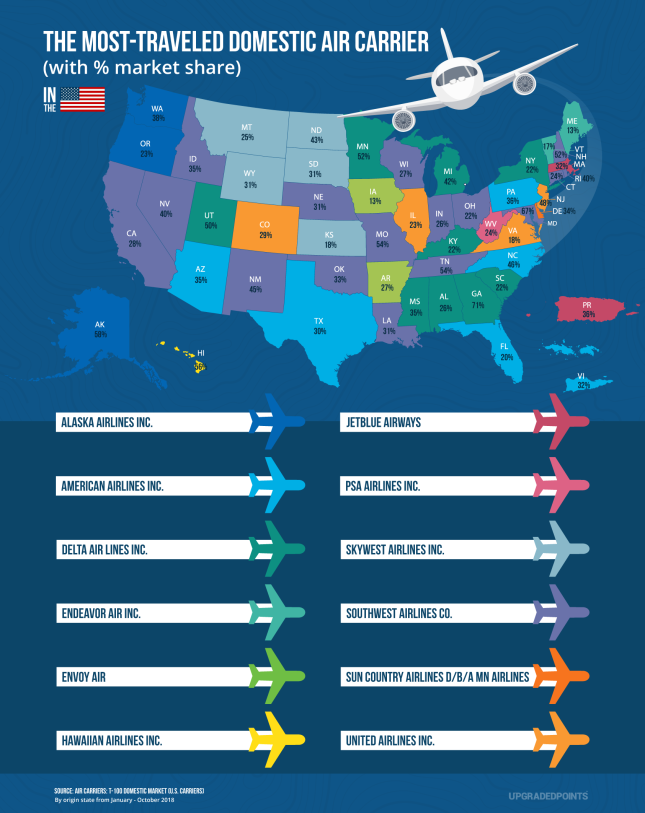 Upgraded Points also ranked the airlines on their total revenue passenger miles (RPMs), an industry measure that reflects the number of miles traveled by paying passengers. RPMs are often used as a proxy for an airline’s traffic. The following graphic shows total RPMs for the top U.S. carriers. 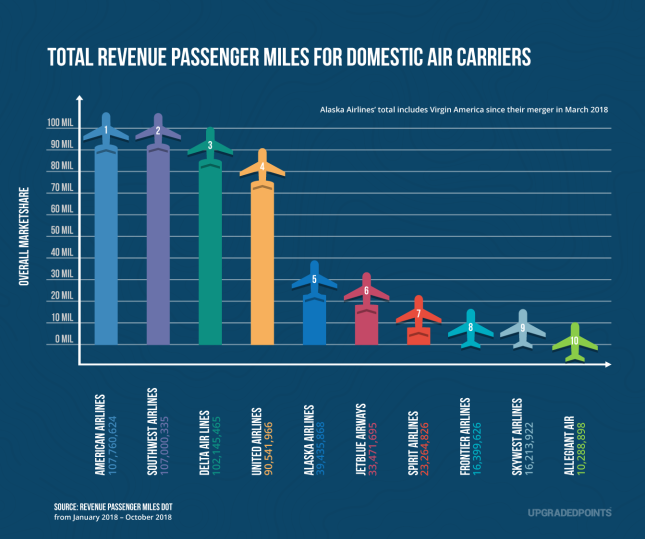 Both American and Southwest posted RPMs of more than 107 million, while Delta reported 102 million. The metric is important to airlines because U.S. airfares have dropped so much over the past 30 years. Between 1990 and 2018, the inflation-adjusted cost of an airline ticket declined by more than a third. You probably won’t be surprised to learn that, in the United States, various federal and local taxes currently eat up between a fifth and a quarter of the fare.

Last year, The Wall Street Journal reported that 2017 profit per passenger per flight segment (one takeoff and landing) for the top seven U.S. airlines was $17.75, down from nearly $20 in each of the preceding four years. It’s almost certainly lower than that currently as the airlines compete for passengers on popular routes. What may help most to improve profitability is low fuel cost, and that may encourage the airlines to offer even more very low fares as the summer travel season hits high gear. For useful tips, read this before you book your summer travel.

24/7 Wall St.
20 Airlines That Have Gone Out of Business in the Past Year
Subscribe to Our Newsletter
Read more: Technology, Array