Sprint Nextel Corporation (NYSE: S) may be a down and out carrier in the wireless wars against Verizon Communications Inc. (NYSE: VZ) and AT&T Inc. (NYSE: T).  What is interesting is that a culmination of events is driving shares far more than normal this morning.  We wanted to take a look at the factors to explain some of the interest this Monday, some of which may have implications beyond just a single day.

Sprint is supposed to sell tablet PC plans next year.  At issue is that no time-frame nor which manufacturer is being used.  That leaves it as a late arrival, without known cures to tardiness.

A unit of Street.com was positive and called it out as having dark horse, or come out of nowhere, opportunities.

David Einhorn of Greenlight Capital was quoted in Barron’s in “Tech Trader: Giving Blackberry The Raspberry” this weekend that he believes Sprint is undervalued and that he has just started buying Sprint Nextel shares.  Einhorn called it a good real estate investment with massive parcels of wireless spectrum that perform better than AT&T and Verizon on some frequencies.

The same Barron’s ‘Tech Trader’ article quoted Chandan Sarkar of Auriga saying that Sprint trades nearly at the value of its spectrum alone.

Sprint is also going to drop the iDEN network ahead and consolidate its suppliers as it goes through its network build-outs ahead.

The short interest released just last month is showing a rise in the short interest as well.  That hit a sharp 136.6 million shares as of the November 30 settlement dates, the highest reading of shares short since mid-March. 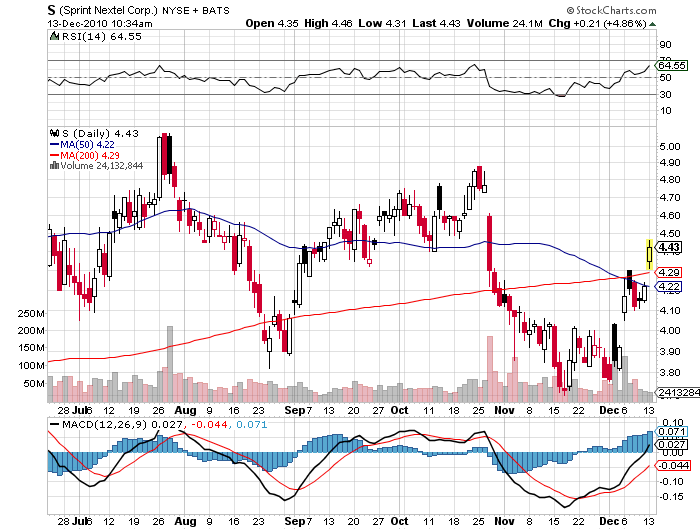 Sprint Nextel has a long road ahead of it.  We are detailing more about an individual outlook for Sprint Nextel in the coming days.  Shares are up nearly 5% at $4.43 so far this morning.